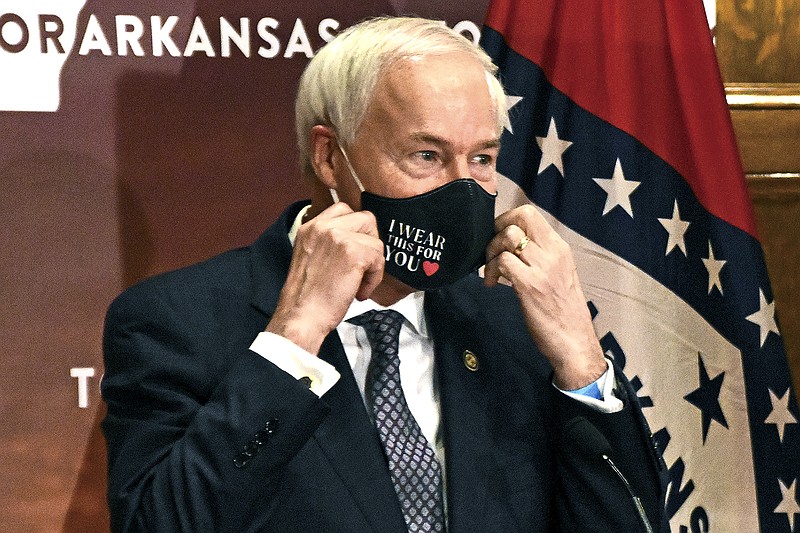 The Associated Press GOVERNOR: In this July 20 file photo, Gov. Asa Hutchinson removes his mask before a briefing at the state Capitol in Little Rock.

Gov. Asa Hutchinson received a 60-day extension to his public health emergency declaration Monday, after lawmakers defeated an attempt by several Republicans to end the emergency and lift all remaining executive orders issued in response to the covid-19 pandemic.

The vote by Legislative Council Monday was the first test of the governor’s newly-limited executive powers under Act 403, a law passed by the Legislature and signed by Hutchinson earlier this month.

The law was passed following months of public frustration by some lawmakers about Hutchinson’s response to the covid-19 pandemic, including a state-wide mask mandate issued last year.

Appearing before Legislative Council Monday, Gov. Asa Hutchinson said he would allow the mask mandate to expire on Wednesday, following his decision to lift other public health directives on businesses.

Still, the governor said an extension of the public health emergency was necessary to encourage Arkansans to become vaccinated against covid-19, and to allow low-income residents to qualify for supplemental SNAP benefits from the federal government.

The governor also sought approval from lawmakers for the extension of five executive orders related to telehealth and healthcare access, public notaries, business liability and an extension of the state income tax filing deadline.

Still, some lawmakers dismissed the ongoing threat of the virus and called for the Legislature to take greater authority over the state’s pandemic response by ending the year-long emergency declaration.

“We are past time, I think it is time for the Legislature to act,” said state Sen. Alan Clark, R- Lonsdale.

After a few more minutes of debate, lawmakers also voted to extend the governor’s five remaining executive orders related to the pandemic.

Hutchinson said those orders will remain in effect during the extension, unless lawmakers pass legislation to the same effect.