Bowing to Baylor: UA’s hole too deep vs. 1 seed 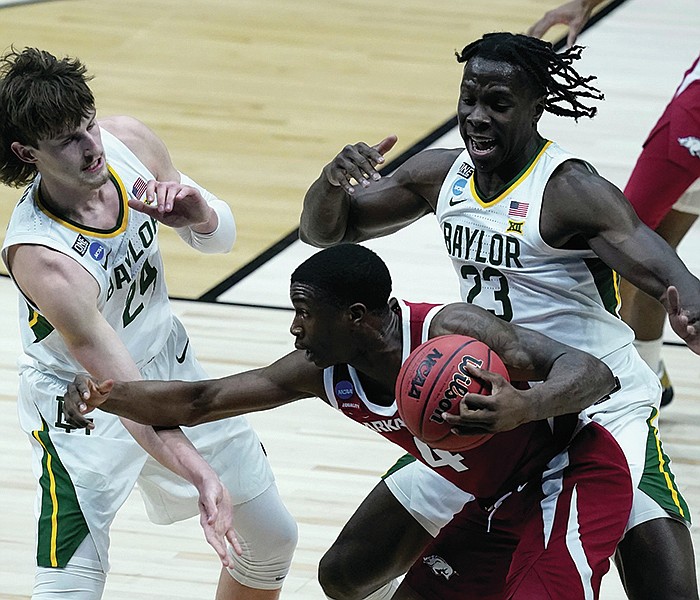 Arkansas guard Davonte Davis (4) tries to get past Baylor guard Matthew Mayer (24) and forward Jonathan Tchamwa Tchatchoua (23) during the second half of an Elite 8 game in the NCAA men's college basketball tournament at Lucas Oil Stadium, Monday, March 29, 2021, in Indianapolis. (AP Photo/Darron Cummings)

Baylor was too good and the deficit was too big.

After the Bears built an 18-point lead in the first half, they held on to beat the Razorbacks 81-72 on Monday night in the South Region final at Lucas Oil Stadium in Indianapolis.

Baylor (26-2) never trailed and advanced to its first Final Four appearance since 1950, where it will face Houston in the national semifinals.

The Razorbacks pulled as close as four points twice in the second half against Baylor, but never had the ball with a chance to tie or take the lead.

"The effort when we got down, we could have hung our heads," Musselman said. "But we played really hard, I can tell you that.

"I mean, we played extremely hard, but lacked some scoring at times. And defensively they hit some tough shots on us."

The Razorbacks won 10 games this season in which they trailed by nine or more points, including a 75-73 victory over Auburn when they rallied from a 19-point deficit.

But that victory was at home in Walton Arena, and Auburn isn't Baylor. The Bears are ranked No. 3 in The Associated Press poll and were the No. 1 seed in the South Region.

"That's a really good team across the way, man," Arkansas senior guard Jalen Tate said. "And we've been [overcoming deficits] all year. It's really hard to come back, especially from down 18. I didn't even know we were down that much at one point in the game. But it just shows the resiliency of this group.

"We almost did it. We weren't able to tonight. We did a lot on our 12-game [SEC] win streak, and especially these three past games in the [NCAA] Tournament. We just had great fight and we were able to dig in and get back."

Arkansas junior guard JD Notae scored 14 points in just 15 minutes before fouling out with 13:38 left when he was called for an offensive foul. He hit 5 of 6 shots, including 2 of 2 three-pointers, and 2 of 3 free throws.

"Honestly, I think some calls didn't go his way," Tate said. "Unfortunately, sometimes it's how it goes."

Tate couldn't help but wonder how the game might have been different if Notae -- the SEC's sixth man of the year -- could have played more minutes.

"I'm not going to say we definitely would have won the game, but I think we would have had a better shot at the end of the game with him on the court," Tate said. "He's an excellent combo guard, scorer, facilitator.

"It's unfortunate this had to be his last game of the year. The refs kind of took it out of his hands a little bit with some of the 50-50 calls that didn't bounce his way."

The Razorbacks couldn't pull closer than eight points the rest of the game.

"We've been in the fire before," said Teague, a senior guard who led Baylor with 22 points. "It's not our first time in the fire. We just had to continue to compete at a high level.

"In the second half, we knew they were going to make a run at us because that's what they do," Bears Coach Scott Drew said of the Razorbacks. "That's what any team in the Sweet 16 and Elite Eight will do.

"They're well-coached and they don't want to go home either. Credit our upperclassmen for not panicking. I thought every time they made a big play, our guys really answered."

"They've got All-Americans," Musselman said. "We had three freshmen in our starting lineup. Obviously we were the youngest team left in the Sweet 16.

"Those guys earned their starts based on how they played. But it's asking a lot for three freshmen in the Elite Eight game."

Freshman guard Davonte "Devo" Davis had 14 points, 6 rebounds and 2 assists for the Razorbacks.

Tate, a graduate transfer from Northern Kentucky, had 13 points and four rebounds.

Arkansas freshman guard Moses Moody, a first-team All-SEC pick who was averaging 17.1 points coming into the game, shot 2 of 10 from the field and finished with 11 points by hitting 7 of 8 free throws.

Justin Smith, who transferred to Arkansas from Indiana this season, had 10 points, 6 rebounds, 3 assists and 2 steals. Freshman forward Jaylin Williams had eight points and four rebounds.

Arkansas had 15 turnovers to nine for the Bears, who outscored the Razorbacks 21-6 in points off turnovers. That improved the Bears' edge in that category in their four NCAA Tournament victories to 81-18.

"Our 15 turnovers, not astronomical, but 21 points off of them," Musselman said. "Just too much to overcome."

Forcing turnovers helped the Bears overcome Arkansas having a 40-36 advantage on points in the paint and hitting 17 of 23 free throws.

Baylor also outscored the Razorbacks 24-9 from beyond the arc by hitting 8 of 15 three-pointers to 3 of 11 for Arkansas.

"Our locker room gave us all they could, came up empty," Musselman said. "We've had a great two months. Played at a very, very high level.

"But tonight, just have to give Baylor credit."