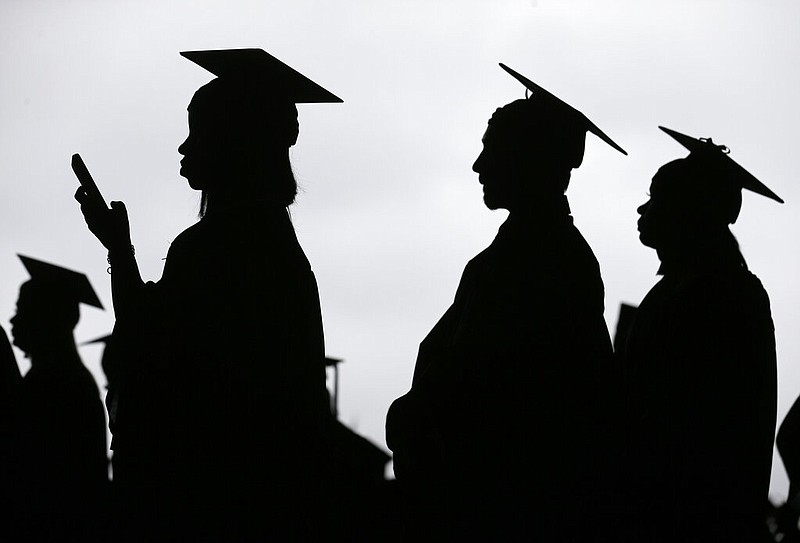 FILE - In this May 17, 2018, file photo, new graduates line up before the start of the Bergen Community College commencement at MetLife Stadium in East Rutherford, N.J. (AP Photo/Seth Wenig, File)

She’s got a job in the career she wants, working for the University of Arkansas Cooperative Extension Service as an agricultural agent in Saline County. She and her boyfriend own a house, and she’s able to manage the monthly payment she must make on the tens of thousands she owes in student loan debt.

But if some or all of the loans were forgiven, as some are pushing for at the federal level, Nichols said it would “just take a burden off.”

“My goal in the future is to start my own farm and if I didn't have $30,000 of debt attached to my name that would definitely help that goal,” she said. “I feel like I could be doing or achieving my goals a lot faster.”

Nichols is one of the roughly 377,500 Arkansans carrying student loan debt, according to data from the U.S. Department of Education. Collectively, Arkansans owe $12.5 billion in student debt or an average of about $33,000 per borrower.

Those figures could dramatically fall, though, if talk at the federal level of student loan forgiveness to the tune of $10,000 per person, as favored by President Joe Biden, or even $50,000 per person, as pushed for by some Democratic senators, comes to fruition.

The move would primarily benefit Arkansans between 25-49, who account for about two-thirds of borrowers with unpaid student debt. Within the group, Arkansans 25-34 owe an average of $31,500 per borrower, while borrowers 35 to 49 carry the greatest debt per person of any age group, at $44,200.

He acquired more than $30,000 in debt over two years at ITT Technical Institute, a for-profit college that has since shuttered. The closure came in 2016 after the school was banned from enrolling federal aid students due to concerns it misled them.

Chandler, who lives in Cabot, said the company definitely oversold what it could provide him, and he’s never been able to get a job in his field of study, networking.

Chandler said he has applied for federal loan forgiveness aimed at people who attended schools that have since closed, such as ITT, but has not been successful.

He’s continued working to pay down his debt, but it hasn’t been easy — and at his current rate, he’s not expected to finish paying until 2040.

“We've had a car be repossessed. It took a lot longer to save up to get a house or a better apartment,” Chandler said. “Just everything we've done has been behind because it's taken so much longer to get the money we need.”

Katie Walton, a librarian who lives in Little Rock, said she feels like her life plans have been delayed by student debt, too.

She and her husband probably would’ve gotten married sooner if she didn’t have more than $50,000 in student debt, she said, and now, at 33, she feels like she’s just starting to get to a place where having children is possible.

“It has an impact on everything because it's always just there looming,” Walton said. “In a lot of ways you feel like you kind of have to put your life on hold until you get it under control.”

Aside from just the financial impact of debt, she said, student loans also have a mental dimension.

She feels the constant need to justify her choices, to tell people she looked for scholarships and worked multiple jobs through school and still came out in debt — an experience shared by others interviewed by the Democrat-Gazette.

Walton now works for the state, so she’s banking on loan forgiveness through an existing program for Americans who have worked in public service roles. However, she said there’s always a chance she doesn’t get approved for forgiveness, and even if she does, relief from that program is at least a few years away.

More immediate forgiveness would be welcome, she said, and not just for herself.

“I don't want anyone to have to struggle the way I’ve struggled,” Walton said. “I had years of just living in junky apartments just because I had that extra bill, and so I do hope that there is some relief.”

Kelsey Danielsen, 28, is a pharmacist, and she accumulated more than $140,000 in debt through her education at University of Arkansas for Medical Sciences.

She said she does earn a good income, but about half of her paycheck goes straight to her loans because she’s trying to pay them off in 10 years.

However, her husband, a pharmacist who attended Harding University, has so much debt Danielsen said they don’t work toward actually paying them off but rather just pay what is minimally required.

The $10,000 in forgiveness floated by the president would help her, she said, but would amount to a drop in the bucket for her husband’s debt.

“We're not even paying the full interest, so that would just help us keep that loan at a minimum,” she said. “We might actually be able to address his loans if that happened.”

Even if loan forgiveness doesn’t happen, Nichols, the agricultural agent, said she hopes some reform comes to interest rates. She said she’s been paying consistently on her loans for years, and the vast majority goes to just interest, not the principal amount she initially borrowed.

Walton said interest has consumed most of her payments as well — she started with about $52,000 in debt and now owes $57,000 despite continued payments.

“I assumed that in 10 years if I applied for public service loan forgiveness that I would have worked out a big chunk of that money,” she said. “I was not as prepared for the fact that it hasn't even put in a dent.”

She said if widespread debt forgiveness happens, it’s not a fix-all solution to the debt crisis.

“It's a broken system,” she said. “This isn't the only thing that will need to happen.”