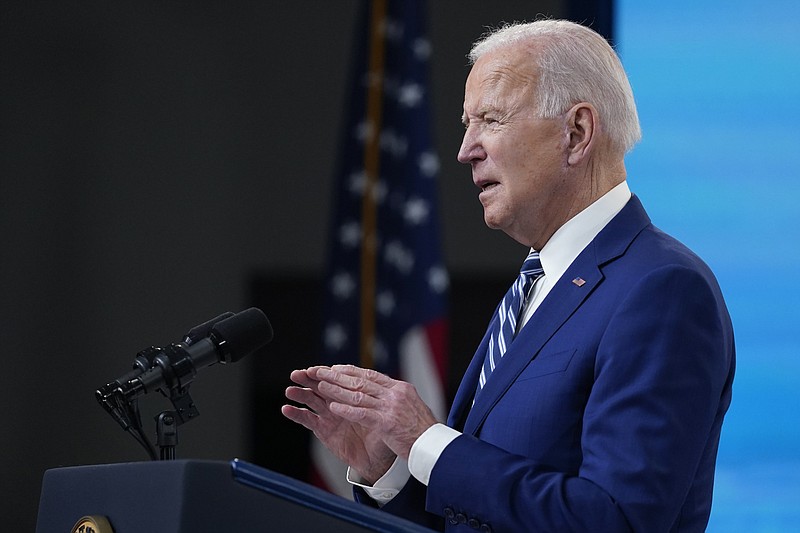 President Joe Biden speaks during an event on COVID-19 vaccinations and the response to the pandemic, in the South Court Auditorium on the White House campus, Monday, March 29, 2021, in Washington. (AP Photo/Evan Vucci)

WASHINGTON -- President Joe Biden on Tuesday nominated a racially diverse and overwhelmingly female group to federal and other judgeships, including three Black women for U.S. courts of appeals, which are seen as one pathway to the Supreme Court.

Biden promised as a presidential candidate to nominate a Black woman to serve on the nation's highest court should a seat open up during his term.

With the announcement of his first slate of judicial nominees, Biden signaled his intent to counter his predecessor's reliance on white men to fill openings on the federal bench, and to appoint judges who bring a broader variety of backgrounds and life experiences to the role.

Several of Biden's nominees served as public defenders. One is a former military prosecutor. Nine of the 11 are women. The slate also includes a nominee for the Superior Court of the District of Columbia.

Three of the picks are Black women whom Biden nominated for the federal courts of appeals, often a stepping stone to the Supreme Court. The most prominent of the trio is U.S. District Judge Ketanji Brown Jackson, whom Biden is nominating to the seat left vacant on the U.S. Court of Appeals for the D.C. Circuit by Judge Merrick Garland's departure to become attorney general.

The two other Black women whom Biden nominated for the appellate circuit are Tiffany Cunningham, 44, for the U.S. Court of Appeals for the Federal Circuit, based in Washington, and Candace Jackson-Akiwumi, 41, for the Chicago-based 7th U.S. Circuit Court of Appeals. Both are in private practice.

The D.C. Circuit, in particular, is a place where presidents have searched for Supreme Court justices. Three of the high court's nine members have served on the D.C. Circuit.

Some Democrats have urged Supreme Court Justice Stephen Breyer, who is 82, to retire to allow Biden to choose a possible replacement. Jackson, 50, is a graduate of Harvard Law School and previously served as a law clerk to Breyer.

Other Black women who would be front-runners if a spot on the U.S. Supreme Court were to open are California Supreme Court Justice Leondra Kruger and U.S. District Judge Michelle Childs. Childs is a favorite of Rep. James Clyburn, D-S.C., who made a crucial endorsement of Biden just before the state's presidential primary last year.

Some of Biden's candidates had been tapped for judgeships by former President Barack Obama, but Republicans never allowed the full Senate to vote on them.

"This trailblazing slate of nominees draws from the very best and brightest minds of the American legal profession," Biden, a former Senate Judiciary Committee chairman, said in a statement. "Each is deeply qualified and prepared to deliver justice faithfully under our Constitution and impartially to the American people -- and together they represent the broad diversity of background, experience, and perspective that makes our nation strong."

The White House said Biden's choices show his strong belief that the federal courts should reflect the "full diversity of the American people."

Administration officials emphasized the speed with which Biden announced his first batch of nominees, stressing that the president was out of the gate with names faster than former President Donald Trump. There is good reason for Biden to move quickly on this front.

There currently are 72 judicial openings. The Senate, which must confirm the nominees, is split 50-50, with Vice President Kamala Harris called on to break tie votes. Biden would need the Democratic caucus to stick together in support of his candidates if Republicans unite in opposition, though the administration hopes to attract GOP support for some, if not all, of the nominees.

There is no guarantee that Democrats will hold the majority after the 2022 midterm elections, meaning the White House and Senate Majority Leader Charles Schumer, D-N.Y., will have to be aggressive about pushing nominees through confirmation in much the same way that Trump and former Senate leader Mitch McConnell, R-Ky., got the former president's nominees confirmed.

"America is so much better when our rich diversity is reflected in every aspect of society, especially our justice system," Schumer said.

Senate Republicans had no immediate reaction to individual nominees. Sen. Charles Grassley, R-Iowa, the senior Republican on the Judiciary Committee, said they should ultimately be judged on their own merits.

"We should neither be a rubber stamp, nor should we oppose nominees as a matter of course, as many Democrats did during the Trump administration," Grassley said in a statement.

Trump leaned heavily on white men to fill judicial vacancies. An Associated Press analysis found that over 86% of the more than 200 federal judges confirmed under Trump were white, the highest rate of white judicial appointments since George H.W. Bush's presidency.

Two-thirds of Trump's judicial appointees were white men; less than a quarter were women.

Overall, about a third of active federal judges are women, and Biden's nomination of three Black women to federal courts of appeals is particularly significant.

Currently, of the approximately 170 active judges on federal courts of appeals, only four are Black women, and all are 68 or older, according to a Federal Judicial Center database.

Sherrilyn Ifill, president and director-counsel of the NAACP Legal Defense and Educational Fund, said the organization was "gratified" that Biden is acting to diversify the federal bench.

"Such diversity will greatly enhance the judiciary and judicial decision-making," Ifill said in a statement.

Biden's White House has made clear that it intends to put judges with different types of backgrounds on the federal bench as quickly as it can. In a letter in December, the incoming White House counsel, Dana Remus, told Democratic senators that Biden would be looking for judges from groups historically underrepresented on the bench.

"White House Counsel Dana Remus has made clear that President Biden wants to nominate the most diverse judges in history -- including diversity of professional background and experience representing individual Americans," said Christopher Kang, a co-founder of the progressive group Demand Justice. "As long as Senate Democrats follow Remus' letter, Biden will not only start to rebalance to our courts, but transform the judiciary by establishing a new mold for all Democratic presidents' judicial nominees."

Advisers to Biden said he was deeply concerned that many Americans -- including those who took to the streets last summer to protest police killings of Black people -- had lost faith in the ability of the judicial system to issue fair rulings in cases that directly affect their lives.

"We need the country, and lawyers, to look at the judiciary and see themselves, see the full range of faces and backgrounds," Remus said in an interview.

"Over time, we hope and expect it does mean there's greater trust and faith that judicial decisions reflect the full range of the country's values."

Information for this article was contributed by Darlene Superville and Jessica Gresko of The Associated Press; and by Carl Hulse and Michael D. Shear of The New York Times.