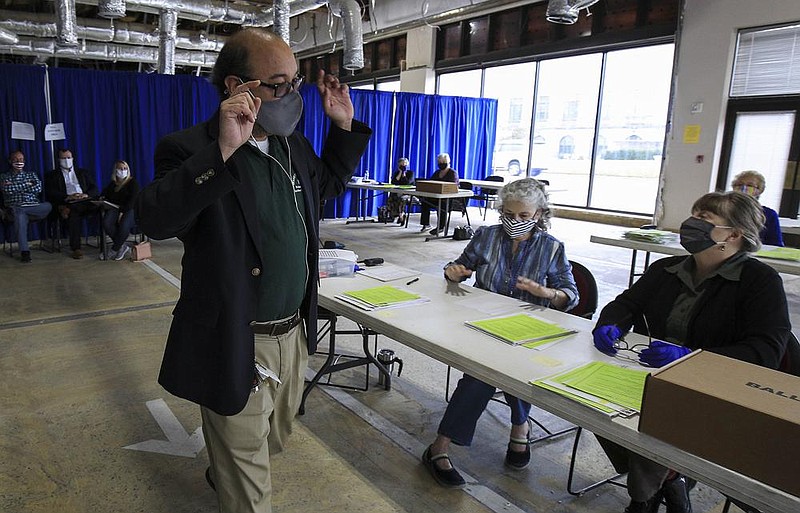 Officials hope the coordination of elections in Pulaski County will be easier with recent personnel changes that followed several controversies over the past two years.

Bryan Poe, the county's director of elections since 2013, resigned Friday, almost three months after the Pulaski County Election Commission voted 2-1 to strip him of his duties to handle elections.

Poe's resignation followed the departure of former commission Chairwoman Evelyn Gomez, who was replaced in January by David Scott. (Commissioners are elected by their parties' county committees in odd-numbered years.)

Gomez and new Chairwoman Kristi Stahr were the Republicans who voted to decertify Poe, while Democratic Commissioner Joshua Price voted against it.

The Republican commissioners often clashed with Poe and county elections staffers over their handling of election procedures and equipment. There were also conflicts that weren't election-related, including an incident that prompted assistant elections director Shawn Camp to file a police report on Election Day in November, alleging that Gomez pushed him while attempting to gain access to offices used by the commission staff.

County Judge Barry Hyde said the county elections department might be able to work better as a unit now that Poe and Gomez have left.

"I think the exit of both those persons, and I sincerely hope this is going to be the case, will resolve the conflicts we've had over the past two years and allow us to get back to the order of business," Hyde said.

Poe resigned 11 days after returning from family leave. He told the Arkansas Democrat-Gazette on Tuesday via text message that he had been reconsidering his priorities since the birth of his second child in December, and he would like to spend more time with his family.

"The long hours for months at a time required to administer an election do not permit me to do so," Poe said. "Therefore I have decided to seek other opportunities."

Hyde said Poe had other reasons for resigning.

"His reasoning to me was that he just wasn't willing to put up with the conflict anymore," Hyde told the Democrat-Gazette on Tuesday.

Hyde, a Democrat, has been responsible for hiring and firing county election staff members since he took over the duty in November 2019, citing an "abusive" work environment caused by an unnamed commissioner. The commission is responsible for assigning or removing a staffer's election duties, according to a state Supreme Court ruling in a Jefferson County case in May 2018.

Hyde said he would like the director position to be filled within the next two months, and he is still deciding whether to advertise for applicants or recommend the promotion of Camp, who is the interim director. Hyde said Camp is "well-versed and has all the required and necessary training for what's on the immediate horizon."

The next election in Pulaski County will be May 18 to fill three seats on the Jacksonville/North Pulaski School District board. Only one of the three races is contested. There will be two early-voting locations and two election day polling places.

When asked if the commission would consider granting election director duties to Camp if Hyde recommends it, Stahr said it was a question for the board and was not appropriate for her alone to answer. She said the commission has dealt with "insubordination by some staff and gross negligence by Bryan Poe" since the November election.

In February, election commission staffers checked equipment and materials used at a polling place in November, and Camp said all of the equipment was found in order and secure despite not being picked up until late January. The staff livestreamed the inspection in order to regain the trust of Pulaski County residents in the electoral process, Stahr said at the time.

Meanwhile, the Democrat-controlled Pulaski County Quorum Court narrowly defeated a resolution on Jan. 26 to condemn Stahr and Gomez while praising the commission.

At the meeting in which Poe was decertified, Price said he would have preferred to see a list of the issues regarding Poe's handling of elections before deciding on his future as director. Reached by phone Tuesday, Price said Poe should have had the opportunity to defend himself before the commission's vote.

Price believes he can work with anyone "as long as they're competent," but whether the commission and director can work well together in the future remains to be seen, he said.

"At the end of the day, regardless of who's in that position, if policies and protocols aren't being followed, switching out the leadership won't really make a difference," Price said.

He also said he thought there should not have been any "contentious" behavior in the county election department while dealing with the unprecedented circumstances of a presidential election during the covid-19 pandemic.

"That's the time we should be banding together to work as a team to serve the voters of Pulaski County, not squabbling amongst ourselves, so I was a little disappointed," Price said.

Hyde said the personnel changes should ensure "a much smoother blending of personalities" in Pulaski County's future elections.

"I think all the folks we've had over there in the commission, as well as the department, are people who are dedicated and working hard and doing what they thought was the best way to carry out an election, but unfortunately we weren't that good working together," Hyde said.