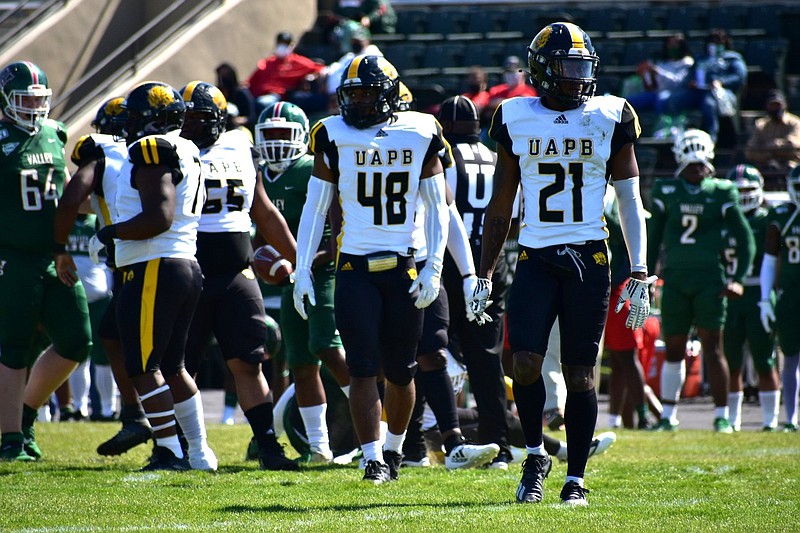 A year ago in April, Doc Gamble’s “interim” label was removed from his title as head coach of the University of Arkansas at Pine Bluff Golden Lions.

“The day I was named interim head coach [two months earlier], I told everyone we would be playing for a conference championship and we would win a championship,” Gamble said. “A couple of the guys came to me and said, ‘You said it.’” Gamble predicted such because of the personnel he has and their mindset.

“I’m able to get you guys to smile a little bit,” Gamble told journalists. “When I say some of this same stuff to these players, they don’t smile. The only time they really smile is after the game and I tell them, ‘It’s fun to win.’” It would take a year since Gamble’s prediction for UAPB to play another game, since the Southwestern Athletic Conference voted to postpone football until this spring because of the ongoing pandemic.

Now, the day has come for UAPB (4-0 overall and Southwestern Athletic Conference) to try to do what it hasn’t since Dec. 8, 2012, when Monte Coleman coached the Lions to a 24-21 overtime win over Jackson State.

Alabama A&M (4-0, 3-0 SWAC) is facing off against UAPB in Jackson at the Mississippi Veterans Memorial Stadium, both teams looking for their second SWAC championship game victory in their third appearance. ESPN2 will telecast the game live, with kickoff at 2 p.m.

For UAPB, it’s an opportunity to complete the program’s first undefeated season since 1937, when then-Arkansas AM&N College went 7-0-3, according to program historian Carl Whimper.

A team that placed nine players and their head coach on the All-SWAC teams can cap a five-year turnaround from a 1-10 season in 2016, the same year tight end Jeremy Brown and receivers Tyrin Ralph and Christopher Robinson red-shirted as freshmen. A win today will be the sixth in a row for the Lions, counting their 2019 season finale against Texas Southern under Cedric Thomas.

“All it is, is an achievement for the work they put in,” junior quarterback Skyler Perry said about the 15 seniors. “All the losing years I heard about, you want to send these guys out with a bang. These guys want to leave their legacy as SWAC champions.” UAPB is riding its longest winning streak since the 2012 final, which was the seventh straight victory at the time. Alabama A&M Coach Connell Maynor said it’s possible the game could come down to who has the ball last, as it did 8½ years ago when Tyler Strickland booted the game-winning 26-yard field goal.

Maynor also surmised the score could wind up 54-52. It would be fitting for two energetic offenses.

Bulldogs senior quarterback Aqeel Glass is the SWAC Offensive Player of the Year. Glass has thrown for 1,084 yards and 13 touchdowns against three interceptions (361.3 yards per game through three games), while Zabrian Moore and Abdul-Fatai Ibrahim lead the conference in receiving yards per game.

Perry, the second-team All-SWAC quarterback, recently won the Impact Award from the national sports radio show “From the Press Box to Press Row.” He has 1,005 passing yards and 12 touchdowns against three picks to his name, but he’s also thrown multiple touchdown passes in each game this spring.

Twice Perry has tossed for four TDs, including his last outing against Prairie View A&M.

For all the talk about passing, Gamble said the ground game will be crucial.

Alabama A&M has a featured back in second-team All-SWAC Gary Quarles, but UAPB has carried the ball by committee with Mattias Clark and Omar Allen II.

Defenses will be tested heavily today, but with second-team All-SWAC linebackers Isaac Peppers and Kolby Watts and first-team All-SWAC rover Jalon Thigpen, the Lions have passed every test against SWAC offenses so far.

“We prepare for this like we prepare for any other game,” Watts said. “The stakes are higher, but we’re going to line up and do what we’re taught to do.” The Bulldogs’ defense has been stalwart as well, holding their opponents to 20.3 points per game. UAPB has allowed 24.8.

And then, there’s the special teams. Ralph could break a long return and even take one for a touchdown if the opportunity presents itself. He did the latter this season at Mississippi Valley State.

Ralph and 14 other seniors have walked through a different kind of valley, the one where winning is scarce. The peak of the SWAC is 60 minutes away for the Lions or the Bulldogs.

“It’s going to mean the world to me,” said Watts, who played as a true freshman in 2017. “I’ve been staying the course. Now, it’s my senior year. I want to win it not just for myself but for the guys who’ve been grinding and pushing with me. Nobody can do this by themselves. Offense feeds off defense, and defense feeds off offense. Seeing everyone smile makes me want to come up here and work every day.” 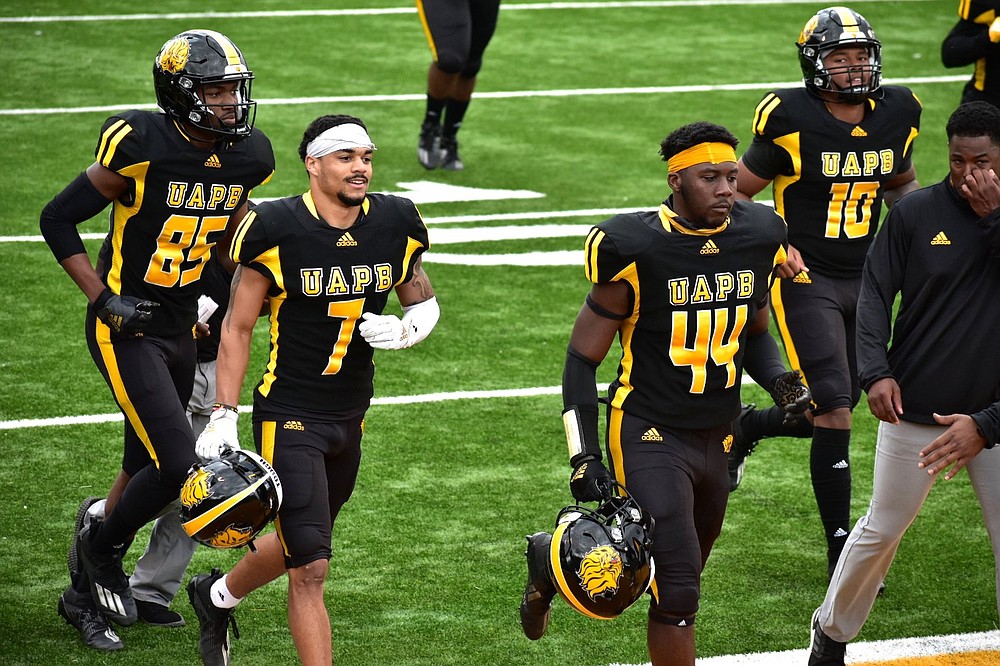 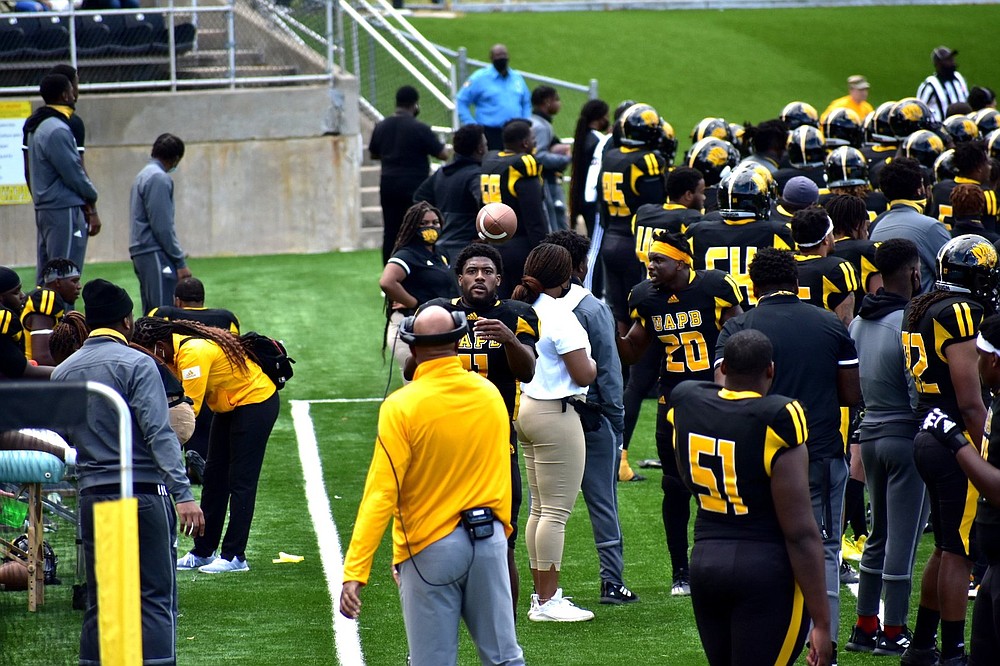 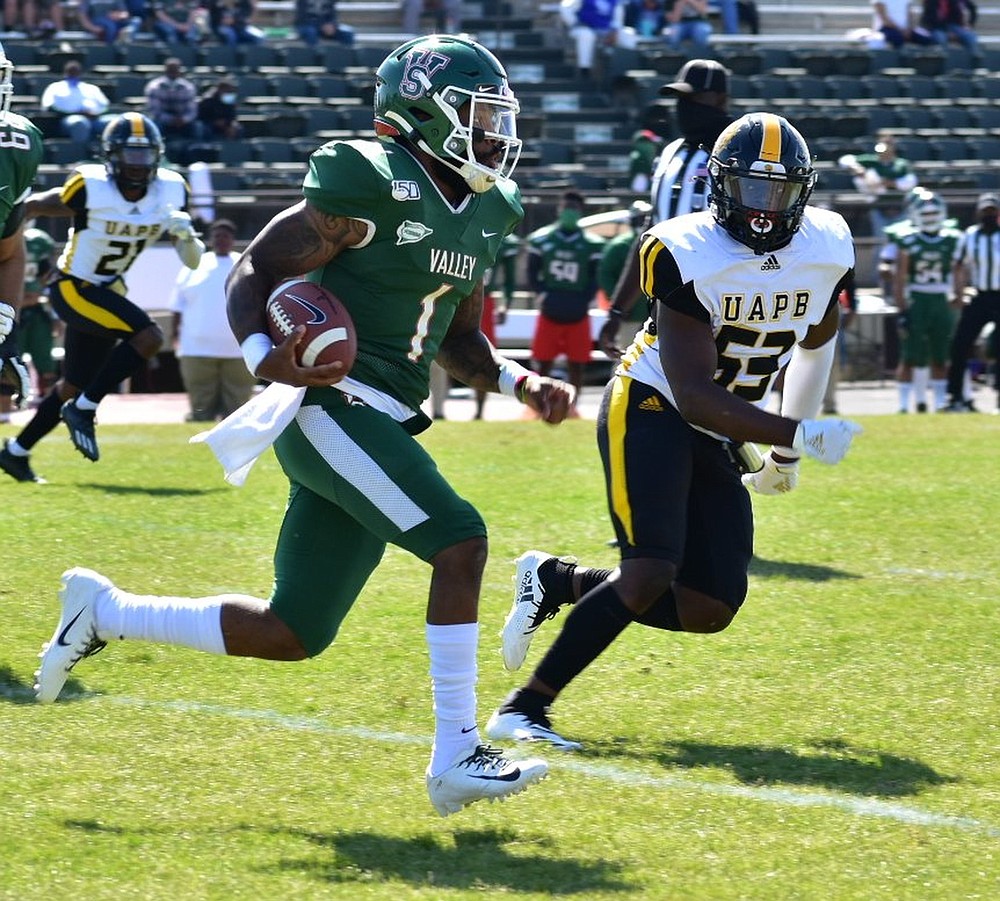