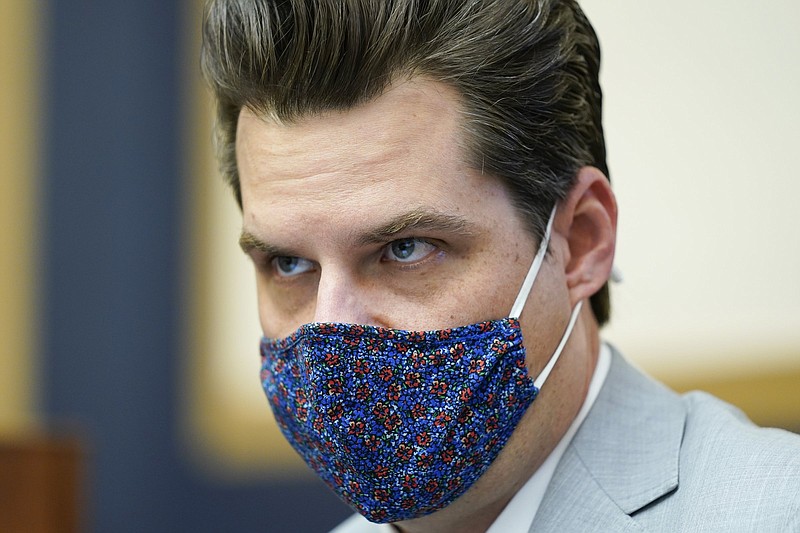 ORLANDO, Fla. -- When U.S. Rep. Matt Gaetz vacationed in the Bahamas in 2018, he was joined by a doctor who donated to his campaign and a former colleague in the Florida Legislature.

The Republican congressman, Dr. Jason Pirozzolo and Halsey Beshears were united in their enjoyment of politics, fancy travel and the company of beautiful women. They also had another mutual interest: Florida's $1.2 billion medical-marijuana industry.

The Bahamas trip is a central element of a federal investigation surrounding Gaetz that has endangered his political career. What began as an inquiry into sex trafficking and whether Gaetz paid women and an underage girl in exchange for sex has grown into a larger review of public corruption, according to people familiar with the investigation.

Investigators are looking at whether Gaetz and his associates tried to secure government jobs for some of the women, the people said. They also are scrutinizing Gaetz's connections to the medical-marijuana sector, including whether Pirozzolo and others sought to influence legislation Gaetz sponsored. The investigation includes legislation from 2018, when Gaetz was in Congress, and earlier work in the Legislature, according to one of the people.

[Video not showing up above? Click here to watch » https://www.youtube.com/watch?v=jdPXBzX-imQ]

None of the people on the trip to the Bahamas has been charged with a crime. Gaetz has vehemently denied any wrongdoing and has retained high-powered lawyers.

A spokesman for Gaetz said Saturday that Gaetz "is a longtime policy expert on marijuana liberalization and passed legislation on the matter as far back as 2013. Rep. Gaetz has never been influenced by outside groups to take a stance on any given position."

Beshears and a lawyer for Pirozzolo declined to comment.

Gaetz's interest in medical marijuana dates back nearly a decade, when he was a member of the Florida House. Well before he would gain national attention for his steadfast support of then-President Donald Trump, Gaetz would carve out an unusual reputation in Tallahassee as a Republican who wanted to liberalize marijuana laws.

In February 2014, Gaetz co-sponsored the first state effort to allow marijuana for medical use. He cast his proposal as a pared-down alternative to a statewide ballot measure that would have broadly legalized medical marijuana. Gaetz's measure was approved with broad bipartisan support and signed into law by Republican Gov. Rick Scott in June 2014, while the statewide measure narrowly failed at the ballot box that November.

The day Gaetz's measure was up for a final debate and vote in the House, both Pirozzolo and Beshears were on the floor.

Beshears was a fellow Republican member of the Legislature who joined Gaetz to support the measure. Pirozzolo, an Orlando hand doctor and pilot, was there serving as the physician of the day for the lawmakers.

Once the legislation passed, it created lucrative new opportunities for Beshears' family and Pirozzolo.

The long-standing nursery owned by Beshears' family was awarded one of five highly coveted licenses to cultivate and dispense medical marijuana.

An amendment added by another lawmaker in the House limited the pool of applicants to nurseries that had been in continuous business for 30 years and had an inventory of at least 400,000 plants. The Beshears family nursery, along with two other growers, met that standard.

The Tampa Bay Times reported in 2014 that Beshears had failed to file a conflict-of-interest report when he voted on the bill, and the lawmaker who sponsored the amendment wanted to "err on the side of limiting who could qualify now" when embarking on such a new industry. More licenses have since been awarded, but the industry is still tightly controlled.

Another amendment added to the 2014 legislation the day Pirozzolo watched in the House required dispensary applicants to employ a doctor as a medical director.

Gaetz has spoken at least twice at the association's annual conferences, including an appearance with longtime Trump confidant Roger Stone, according to the group's social media posts and the recollections of a member.

With recommendations from Gaetz and Beshears in 2018, Pirozzolo was appointed by the current governor, Republican Ron DeSantis, to serve on a board that runs Orlando International Airport. In 2019, he stood next to DeSantis and greeted Trump as he arrived in Orlando to kick off his reelection campaign, according to video posted online by a Sentinel reporter.

Information for this article was contributed by Brendan Farrington and Terry Spencer of The Associated Press. 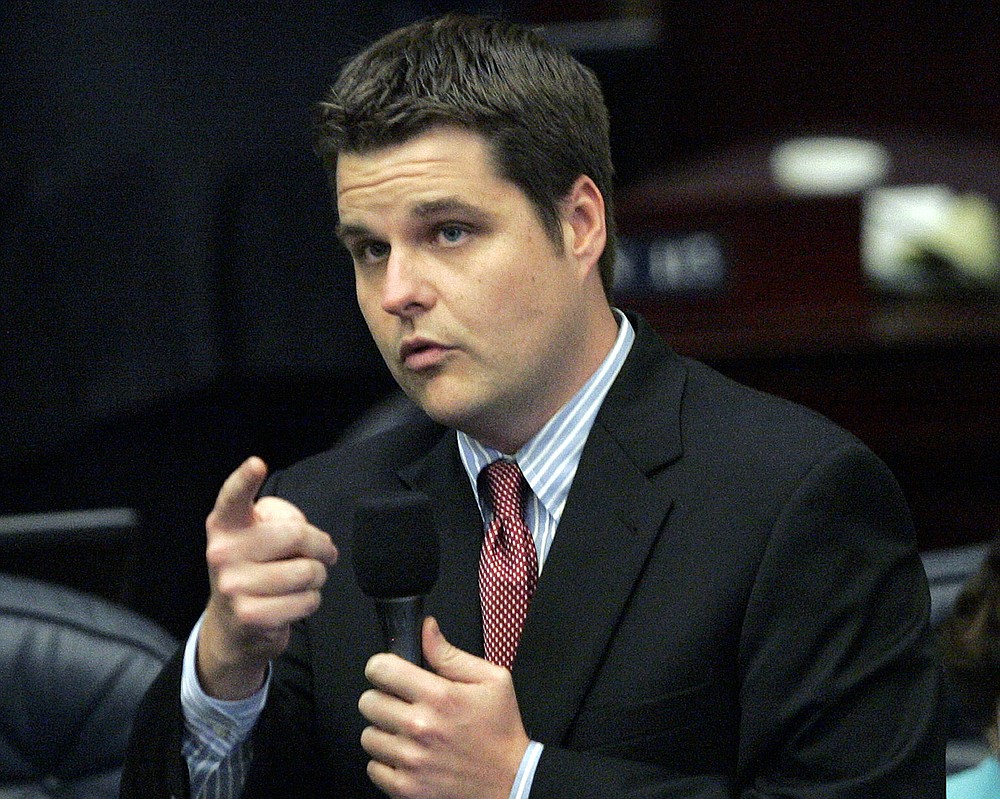 FILE - In this May 1, 2014, file photo, Rep. Matt Gaetz, R-Fort Walton Beach, answers questions about the medical marijuana bill during session in Tallahassee, Fla. Before Gaetz rose to national prominence as an ardent backer of Donald Trump, he carved out an unusual reputation in Florida: a Republican lawmaker who wanted to liberalize marijuana laws. (AP Photo/Steve Cannon, File) 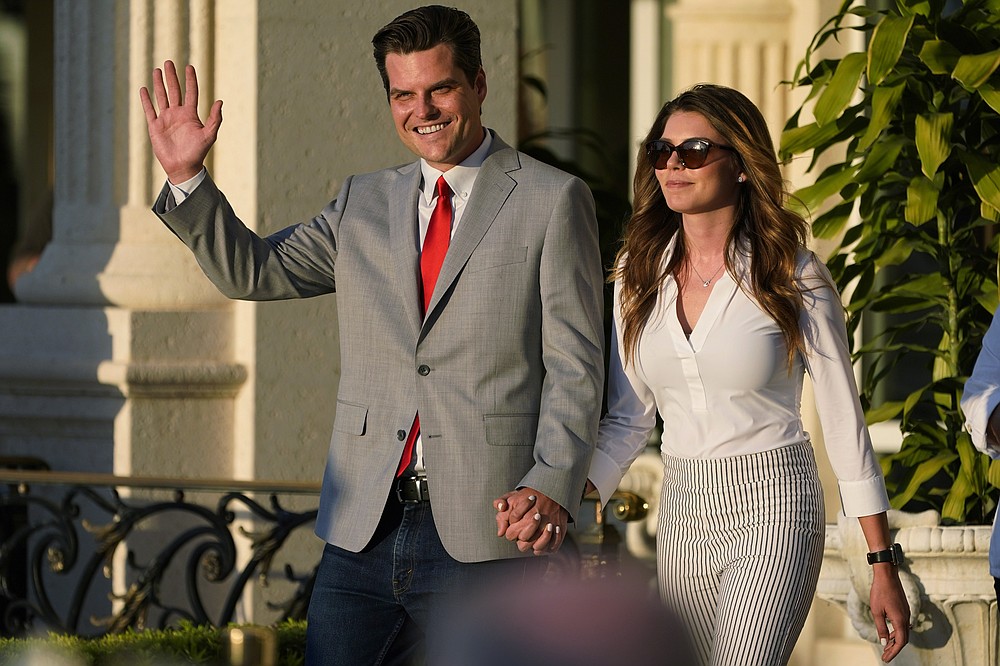 FILE - In this April 9, 2021, file photo Rep. Matt Gaetz, R-Fla., and his girlfriend Ginger Luckey enter 'A Woman for American First' event in Doral, Fla. Before Gaetz rose to national prominence as an ardent backer of Donald Trump, he carved out an unusual reputation in Florida: a Republican lawmaker who wanted to liberalize marijuana laws. (AP Photo/Marta Lavandier, File) 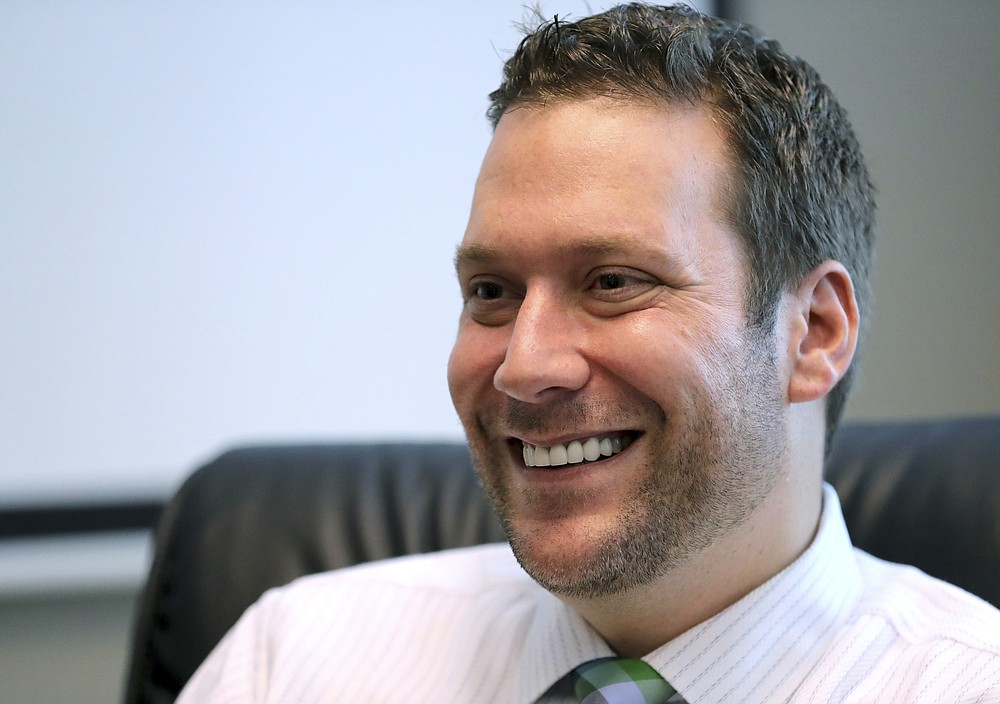 FILE — In this Monday, Sept. 30, 2019, file photo, Seminole County Tax Collector Joel Greenberg talks to the Orlando Sentinel during an interview at his office in Lake Mary, Fla. Greenberg has been charged with trafficking a minor, stalking a political opponent, producing fake IDs, identity theft, embezzlement and bribery. But it's his friendship with U.S. Rep. Matt Gaetz that is attracting the most attention now as federal investigators have launched a sex trafficking probe into the Republican congressman from the Florida Panhandle.(Joe Burbank/Orlando Sentinel via AP)
ADVERTISEMENT