Rochell goes from Bear to Ram 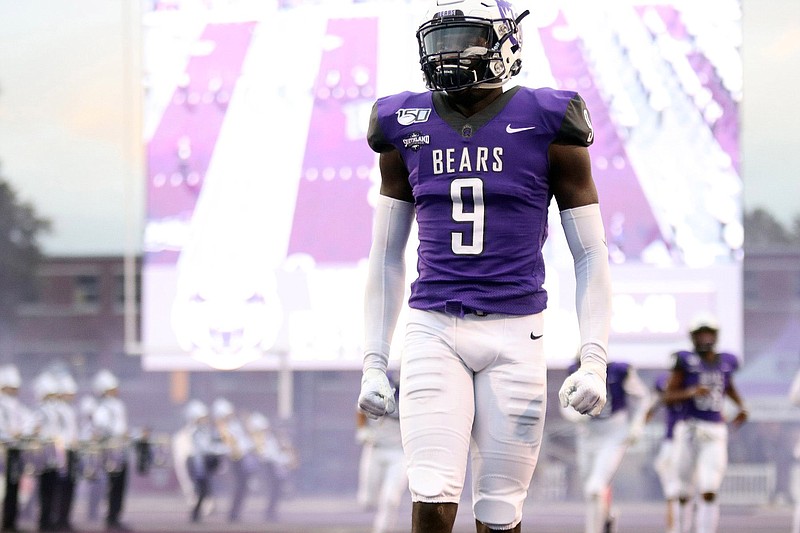 No stars? No matter.

Robert Rochell made history Saturday, becoming the highest-drafted player from the University of Central Arkansas, as the Los Angeles Rams selected the 6-0, 193-pound cornerback with the 130th overall pick in the fourth round of the 2021 NFL Draft.

Rochell, a Shreveport native, played in 42 games over four seasons with the Bears, intercepting 10 passes and breaking up 28 more while earning All-Southland and All-American honors as a junior.

"These last six months have been crazy, especially this weekend," Rochell said. "I thought I was going to go earlier than I did. ... But good things come when you wait a little bit longer. And now it's given me a little chip on my shoulder."

Rochell, after training in Dallas since the end of the fall season, returned to Conway for the weekend, watching the draft alongside his mother, his siblings, family and former teammates and coaches.

To get that phone call was a momentous occasion, not just for Rochell but also his mother, Monique, who raised her children as a single parent after Robert's father, Robert Franklin, was killed in a drive-by shooting in 2009.

"My mother was speechless," Rochell said when asked what his mother told him after he got off the phone with the Rams. "She was just hugging me, crying on my chest.

"Seeing this woman work herself down, sacrifice so much day in and day out that she didn't have to do and go through things that a woman shouldn't even have to go through as a parent -- it was a moment of relief. I felt the relief in her body as she was hugging me."

When UCA identified Rochell at Fair Park High School, he was primarily a 5-8 skill-position player on the offensive side of the ball, playing running back and wide receiver.

The Bears saw Rochell's future on the other side of the line of scrimmage. He was a high-level sprinter and still had room to grow physically. Coach Nathan Brown offered Rochell a chance at cornerback with the possibility of returning to offense if things didn't work out.

That never happened. After redshirting his first year in Conway, Rochell took over as a starter late in his first on-field season and took off from there.

"God blessed him with great physical ability," Brown said. "We didn't have to do much with that other than put some weight on him. He can run, jump, catch, have ball skills -- all the things you look for in a wide receiver or defensive back."

For Brown, Saturday was an equally important moment in his brief tenure as UCA's head coach. Although the Bears have had multiple players drafted in recent years, Rochell became the first to hear his name called during the Brown era in Conway.

It's something that the fourth-year coach can add to his resume while also using it as a tool to continue to build the Bears' program.

Rochell spoke of "keeping the path going for other guys," something that may very well continue as long as UCA remains one of the top programs at the FCS level.

But now, the former Bear now goes on to the NFL, where he'll join a Rams team featuring former No. 1 pick Matthew Stafford at quarterback and two-time All-Pro cornerback Jalen Ramsey.

With Ramsey, second-year safety Jordan Fuller and cornerback Darious Williams, the Rams have a strong defensive backfield but one without depth, meaning there could be chances for Rochell to see the field relatively early in his career.

"Man, I'm gonna be like a sponge in water," Rochell said of the chance to learn from Ramsey, a former No. 5 overall pick and four-time Pro Bowler. "I see his success, so I'm going to try to take his methods and just try to understand his game and his models and his work ethic."