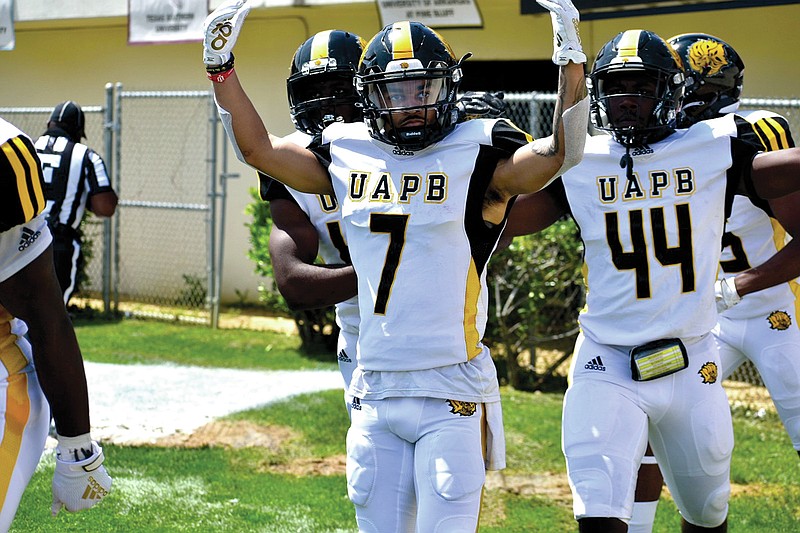 JACKSON, Miss. — Alabama A&M Coach Connell Maynor was right. The Southwestern Athletic Conference championship game did come down to who had the ball last, so to speak.

The University of Arkansas at Pine Bluff earned one last crack after cutting into a 14-point deficit late, but senior safety Trenton McGhee intercepted a Skyler Perry pass up the middle with 6 seconds left and Maynor’s Bulldogs won their first title in nearly 15 years, 40-33 at Mississippi Veterans Memorial Stadium on Saturday.

The Golden Lions (4-1) were going for their first title in almost nine years and first undefeated season since posting a 7-0-3 mark in the 1937 season. They led 26-18 at halftime, but the Bulldogs (5-0) scored on three of their first four possessions of the second half.

“We had some missed opportunities,” first-year UAPB Coach Doc Gamble said. “The defense played well enough to win.” A&M — which beat UAPB 22-13 in the 2006 title game — led by as much as 40-26 thanks in no small part to Aqeel Glass. The senior quarterback added championship game MVP to his resume after completing 24 of 45 passes for 271 yards and three touchdowns, two of them going to Zabrian Moore (five receptions, 111 yards).

Glass was named SWAC Offensive Player of the Year earlier in the week.

“We knew we had to contain the quarterback,” Gamble said. “That was key for us..” Perry, a junior, completed 23 of 36 passes for 231 yards and a touchdown, but threw three interceptions. For a team that prides itself on winning the takeaway battle, UAPB committed four turnovers to A&M’s two.

Josh Wilkes caught an 11-yard pass from Perry with 2:30 remaining to slice the deficit to 40-33. UAPB then forced A&M three-and-out to get the ball back on the Bulldogs’ 44 with 37 seconds left.

Perry completed a pass to Tyrin Ralph for 10 yards and then rushed for another 12. Perry stopped the clock and threw incomplete to Ralph and Harry Ballard III before trying to go back to Ballard on fourth-and-10. That’s where McGhee sealed the Bulldogs’ fate.

“We had time on the clock, and we came out as aggressive as always,” Ballard said after catching five passes for 60 yards. “We just executed a little better.” UAPB’s DeJuan Miller caught six passes for 69 yards and a touchdown, and Wilkes had six catches for 48 yards and a first-half TD from Taylor Holston, who came in midway through the second quarter after Perry lost his helmet.

The Lions were flagged 13 times for 139 yards, committing a roughing-the-punter penalty on fourthand-34 and that same drive being called for a late hit early in the second quarter. Gary Quarles’ 3-yard run capped off a nine-play, 43-yard series that gave the Bulldogs a 16-14 lead.

Gamble attributed the penalties to over-excitement on the Lions’ part.

“Definitely, no doubt,” he said. “We had a couple of questionable ones, but the refs do a good job. That’s a legit crew that called the game. The other penalties were good calls.” UAPB answered on each of A&M’s first three scores and cashed in another Ralph return and a scoop-and-score.

After the Bulldogs went ahead 10-7 midway through the first quarter, Ralph took back the kickoff 81 yards to put the Lions back in front.

Defensive back Chris Newton strip-sacked Glass, and senior linebacker Kolby Watts returned it 33 yards to pad UAPB’s lead at 26-18 with 5:17 to go before halftime. The stroke of luck was much needed for Lions, who gave up a blocked point-after return by Ja’Maria Green less than 2 minutes earlier.

Gamble hoped UAPB could get a solid rushing game going, but neither team went for 1oo yards on the ground. Perry was the Lions’ leading rusher with 16 carries for 71 yards, but Mattias Clark — who netted 5 yards on 8 carries — put UAPB on the board with a 4-yard tote on the team’s first drive of the game.

THE GAME CHANGED WHEN …

Alabama A&M scored on three of its first four drives of the second half.

Gass for throwing three touchdowns despite being sacked five times.

UAPB kicks off the fall 2021 season Sept. 4 at home against Lane College of Tennessee.