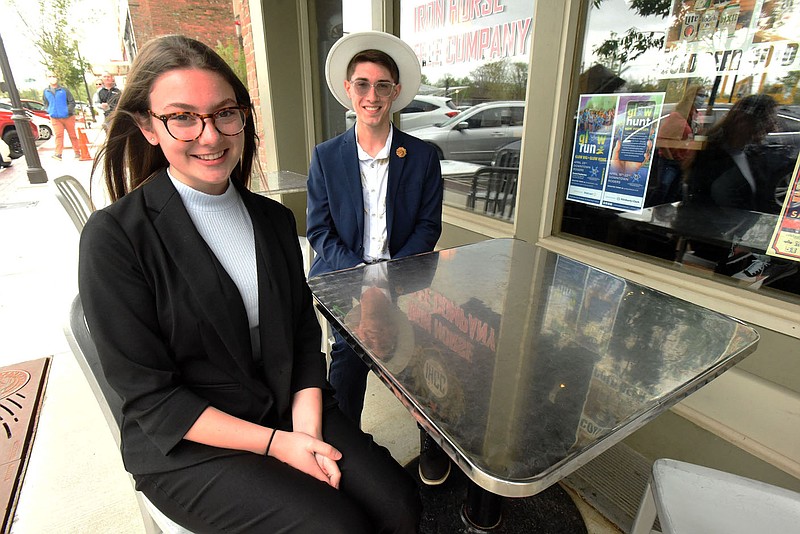 ROGERS -- E-waste is a problem Jackson Guthrie and Abigail Fleming want to solve.

"There are so many ways for kids to get involved with big world issues like this," said Fleming, a Rogers High School junior.

"Covid had a lot of impact," he said. "I felt like I was really seeing a lot of good things and I wanted to join in that."

Disposing of such items properly is a growing problem globally, Fleming said. The world produces as much as 50 million tons of e-waste a year, according to a 2019 report by the United Nations. Only 20% is formally recycled.

E-waste comprises 2% of landfill volume, but is responsible for 80% of toxic metals such as lead, mercury and arsenic leaching into water, Tucker said. It should be habitually recycled just like cardboard and glass are, Fleming said.

Six volunteers from the Rogers High Keystone Club assisted with the drive-up event, he said. Tucker's company donated a 30-foot trailer and a driver to haul it to eSCO for secure disposal or recycling, Fleming said.

"We handle all data to Department of Defense standards," Tucker said of securely destroying information stored on computers and hard drives.

"We did not have a quantifiable goal," Guthrie said. "We just were hoping somebody would show up."

The response demonstrates the need for e-waste recycling in the region, he said.

Many people have lots of items tucked away in their homes and don't know of organizations such as E-waste Warriors or businesses such as eSCO through which they can safely dispose of e-waste at little or no cost, he said.

E-waste Warriors plans to have another recycling event around August, Guthrie said, hoping the organization will inspire others to do the same to create the greatest impact possible.

Tucker said he was impressed with the students' efforts in creating and conducting the event.

"I'm hoping that they keep the head of steam that they've gathered, and we'd love to support them in the future," Tucker said. "Hopefully, it can be a lasting partnership."

A processing fee of about $10 may be required for some older televisions and computers with tubes containing toxic materials, Tucker said. It's otherwise free to recycle electronics through E-waste Warriors or his business, he said.

Guthrie said he hopes to work with more businesses and organizations to help finance recycling drives.

The teen's efforts with E-waste Warriors caught the attention of the National Society of High School Scholars Foundation, which awarded him a $500 Earth Day Scholarship, said Nikki Eye, foundation scholarships and communications manager.

"His project was completely unique and set him apart from the applicant pool," Eye said. "Jackson is innovative and creative, a member of our organization and a leader of his community."

Guthrie said he was excited to receive the scholarship, which is his first and is earmarked for college textbooks.

Both students said they're college-bound after high school. They intend to continue advocating for the environment long into the future, they said.

Northwest Arkansas residents have options when it comes to disposing of e-waste. Most items require a $5 charge to cover the cost of disposal.

The Boston Mountain Solid Waste District offers permanent e-waste collection locations in Springdale, Prairie Grove and Huntsville. The district also hosts free electronics recycling events in communities throughout Washington and Madison counties, such as one planned May 14-15 at the Elkins Community Center.

Northwest Arkansas residents have places to go to recycle their electronic waste. Most items require a $5 charge to cover the cost of disposal.