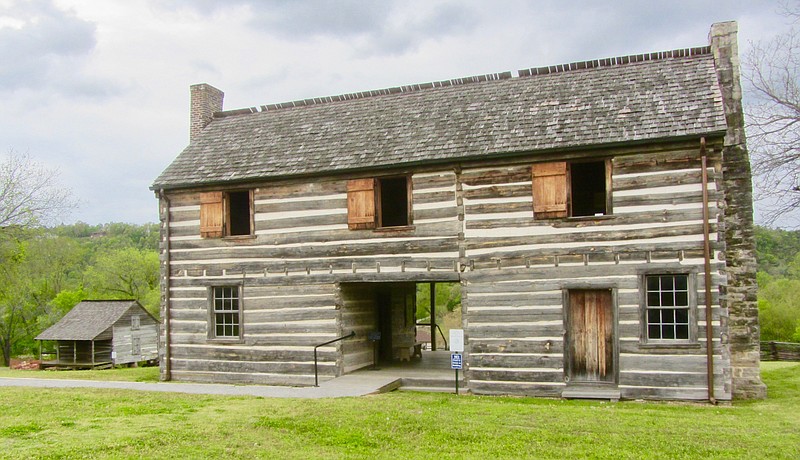 The Jacob Wolf House, built in 1829, is now a state historic site. (Special to the Democrat-Gazette/Marcia Schnedler)

The two-story log structure along Arkansas 5 overlooking the confluence of the White and North Fork rivers was constructed in 1829, seven years before Congress admitted Arkansas to statehood.

It is the namesake of Jacob Wolf, who set up a homestead around 1824 at the mouth of the North Fork, partly to trade with nearby Shawnee and Delaware settlements. The new community he later named Liberty is now Norfork.

"The Jacob Wolf House was initially built as Izard County's first permanent territorial courthouse," explains Marlon Mowdy, site manager since the property's acquisition in 2017 by the Department of Arkansas Heritage (part of the Arkansas Department of Parks, Heritage and Tourism). "It also served as district court for three other counties. Traveling judges and lawyers held court during a seasonal rotation." 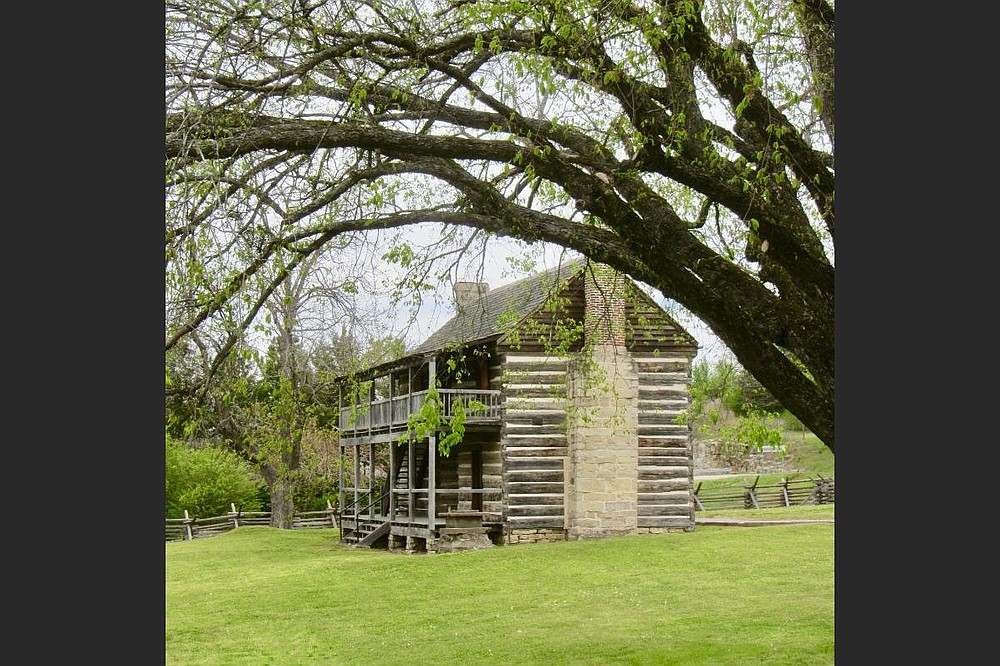 Entry to the Jacob Wolf House is via an outside stairway in the back. (Special to the Democrat-Gazette/Marcia Schnedler)

Wolf evidently was an entrepreneur of prodigious energy, as Mowdy describes him: "He was a territorial legislator, a master log builder, a master blacksmith, owner of two ferry crossings, two keelboats. He farmed 400 acres of land in the river valley, owned a mercantile business, was the postmaster, and last but not least was a Southern Baptist preacher."

Mowdy lauds the Wolf House as "a true testament to the early-19th-century vernacular architecture that existed, highlighting a 1,500-square-foot timber building known as a dog-trot. It provides a great deal of insight to the artisanship that then existed. It was listed on the National Register of Historic Places in 1973."

Visits to the Wolf House are sometimes guided by Mowdy. They begin in the two ground-floor rooms, which originally were the county clerk's office and the jury room. An outside staircase leads to the second floor, whose single space extending over the dog-trot breezeway served as the early courtroom.

After the county seat was shifted elsewhere in 1835, Wolf moved his family into the building. It was occupied at various times by his three wives, 16 children and five stepchildren. After Wolf's death in 1863, the property was sold, then used off and on as a residence until the 1930s. 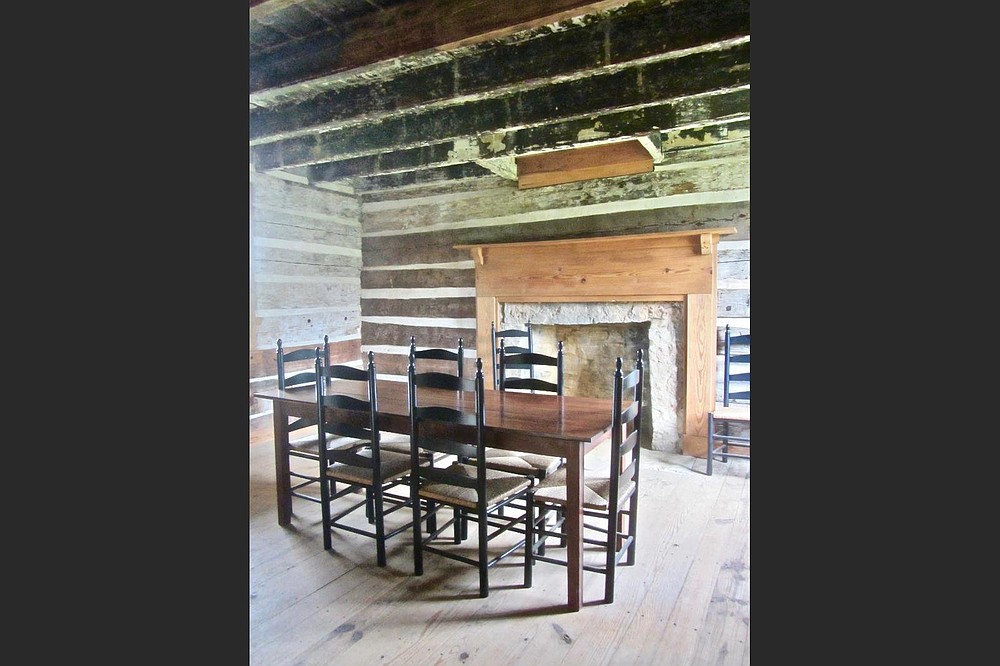 Jurors did their deliberations on the Jacob Wolf House’s ground floor. (Special to the Democrat-Gazette/Marcia Schnedler)

It eventually came under public ownership and was restored in the 1960s by the Elna M. Smith Foundation. A 1999 grant from the Arkansas Historic Preservation Program allowed for further restoration. Late in 2016, the Baxter County Quorum Court transferred the site to the state.

Along with the Wolf House itself, the two-acre property contains the Jacob Wolf Cabin, originally built in 1832 a mile south of Calico Rock on the White River. It was moved to the Norfork location in the early 1990s. A third structure, dating to the mid-1970s, is being converted into the historic site's visitor center.

Planned to begin this summer is a second phase of development that will include a historically correct roof for the Wolf House. The split-rail fence, a replica of the 1840s original, will be extended. Eight outdoor interpretive panels are being designed to recount the area's history in what is now Baxter County. Funding the work is a state-sponsored grant via the Arkansas Natural Cultural Resource Council. 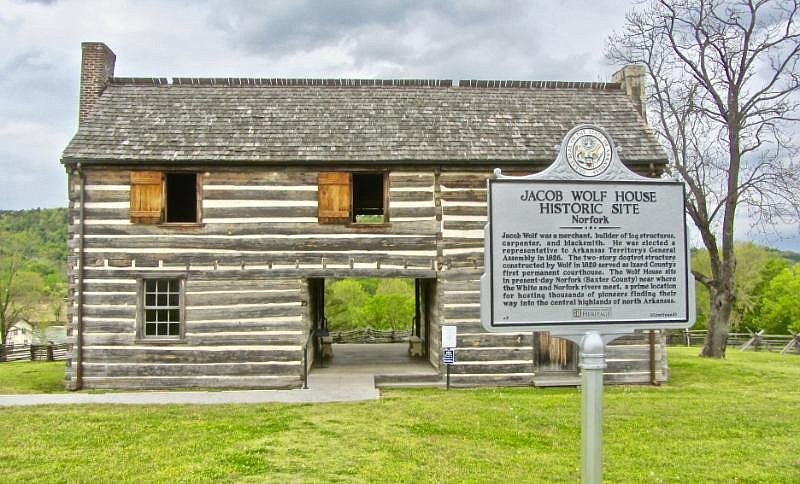 A sign outside the Jacob Wolf House gives a brief history of the site. (Special to the Democrat-Gazette/Marcia Schnedler)

Eventual public programming at the site will include frontier demonstrations, living-history programs, summer camps for youngsters and special events related to the years from 1829 to 1863.

A sustaining topic will be historic preservation, which according to Mowdy, "will speak to the paramount importance of preserving, protecting and promoting our cultural and historical properties."