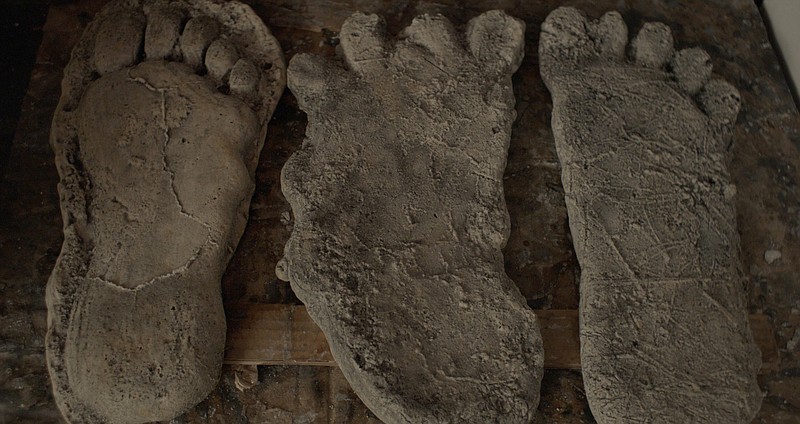 Are these really footprints left by Bigfoot? The story is told in the Hulu series “Sasquatch.” (Hulu)

For the skeptics, conspiracy theorists and true-blue believers among us, monsters are everywhere. Lurking in the shadows, in closets, in the woods, in the murky depths of our waters and maybe even living in our midst.

"Sasquatch," a new Hulu documentary series produced by brothers Mark and Jay Duplass ("Wild Wild Country"), takes America's long fascination with the folkloric, woodland beast as a starting point and weaves it with the growing wave of popular true-crime tales that equally scratch at an unknowable itch. In simplest summary, "Sasquatch" asks: Did such a creature really the kill three men in 1993 on a marijuana farm in Northern California? Is Sasquatch wanted for murder?

A quick primer, first, for those unfamiliar with the ongoing saga of the hairy giant: The mythical being is not necessarily unique to America (the yeti or Abominable Snowman of Himalayan lore shares similar traits) but is interchangeably known as Sasquatch or Bigfoot. The former name is taken from indigenous cultural phrases, and the latter comes by way of supposed found evidence, including massive sunken prints found by hikers or trackers in the Pacific Northwest.

Then there's the matter of what Sasquatch looks like. One feature makes it most captivating to the imagination: It kind of looks as if the human evolutionary chart got taller and hairier. This almost-kinship with a smelly, solitary and insanely buff bipedal ape puts it on our level of understanding. It's why Sasquatch appears as a common character in our urban legends, spooky campfire stories and, yes, even erotica.

It's no surprise then that "Sasquatch" uses its title beastie as a fitting cipher for other monster stories we like to tell ourselves. It gets at our most intimate, deep-seated fears of the "other." The Sasquatch myth even falls in with the national divide, as one of the truest and silliest ways to pit believers against nonbelievers.

The three-part series, currently streaming on Hulu and directed by Joshua Rofe (who made a 2019 documentary that revisited the case of Lorena Bobbitt), recounts a story from gonzo investigative journalist turned filmmaker David Holthouse, who also narrates and acts as on-screen guide. Holthouse remembers a night while working at a pot farm in the fall of 1993 in Mendocino County, Calif., in which a group of migrant workers came back shaken and convinced that a Sasquatch had just killed three people in the woods.

The series takes the viewer on Holthouse's winding investigation into Sasquatch lore, the murder in question (along with possible related incidents) and an examination of the types of communities that are typically ignored or might prefer to operate in the shadows.

Along with a spoiler alert, here are some takeaways from "Sasquatch":

◼️ It's not really about Sasquatch

The first episode takes a fairly serious interrogation into Sasquatch mythology and the people who devote time and energy trying to prove its existence. But by Episode 2, aspiring and existing cryptozoologists might be disappointed as Holthouse and Rofe sort of shoo away further exploration of the big, bad beast in favor of the (sometimes too on-the-nose) explicitly stated monsters of our own design.

There are some fascinating looks at the history of the marijuana-growing subculture of Northern California's Emerald Triangle and at the often-outrageous militaristic effort by the government to crack down on it.

Interviews with members of Operation Green Sweep and the Campaign Against Marijuana Planting — and the farmers whose crops were being destroyed — show why it's difficult to get locals to talk about anything going on in their world, Sasquatch or otherwise. Is it a sense of shame from those involved? Possibly. But more likely, it's the secrecy that defined the marijuana business long before legalization efforts, and the pain inflicted on those who tried to horn in on local growers' business.

◼️ But the Sasquatch subculture is delightful

Viewers may not get a full parade of kooks or zany characters who claim they've touched or hung out with the big fella, but they get a good enough sense of what they're all about.

This includes a dissection of the most notable piece of Sasquatch evidence to date — the Patterson-Gimlin film, which stands as the equivalent of the Zapruder footage for Bigfoot hunters. It shows fairly clear and convincing visual evidence of what you'd imagine: a big, hairy-looking thing that ever so subtly acknowledges the camera and goes about its business.

The 1967 clip was filmed by Roger Patterson and Bob Gimlin in Humboldt County, Calif. Patterson, a known Bigfoot enthusiast, died in 1972, but Gimlin, initially a more skeptical counterpart, appears here to tell the fateful tale of how the duo captured the footage on horseback.

But then you get to his neighbor, Bob Hieronimus, who claims to have been paid to put on an ape suit and appear as the figure in the film. The he-said/he-said testimony from the two Bobs is a great bit of comic relief. They squabble over the most trivial neighborly concerns, such as whether Gimlin still waves and says hi to Hieronimus as he drives by the house.

◼️ The sketchy characters include the narrator

It's a risky proposition to balance an entire series on the storytelling abilities of one man and his voice. Thankfully, for the most part, Holthouse is an engaging character.

There are typical true-crime visual and structural trappings (expect to see more than a few shots of Holthouse pacing around, shouting into a phone or blankly staring at a laptop screen), but his gonzo sensibilities work for the series. Holthouse's attempts to untangle twisting contradictions, make discoveries and conduct interviews work well enough, but "Sasquatch" shines when he hides the camera and explores property without permission, or talks with distrustful but often surprisingly forthcoming sources about the seedy underground network of growers that still haunts the community.

Holthouse might not be a 100% reliable narrator. "This didn't make it in the final cut of the show," Holthouse said in an interview with the literary magazine the Believer, "but my buddy and I had taken a pretty epic psilocybin mushroom trip [the night of the supposed Sasquatch murder]. We really took a heroic dose. This was going down in the cabin, and I was still coming down from the mushrooms, just to add to the surrealism." A viewer is tempted to dismiss the whole ordeal as a bad trip.

However, Holthouse is very forthcoming about his own extraordinary background as a survivor of sexual assault. The heart of the documentary comes into focus as his own personal quest to find Bigfoot — or simply, the truth of a story — reveals a passion for hunting down the monsters of the world.