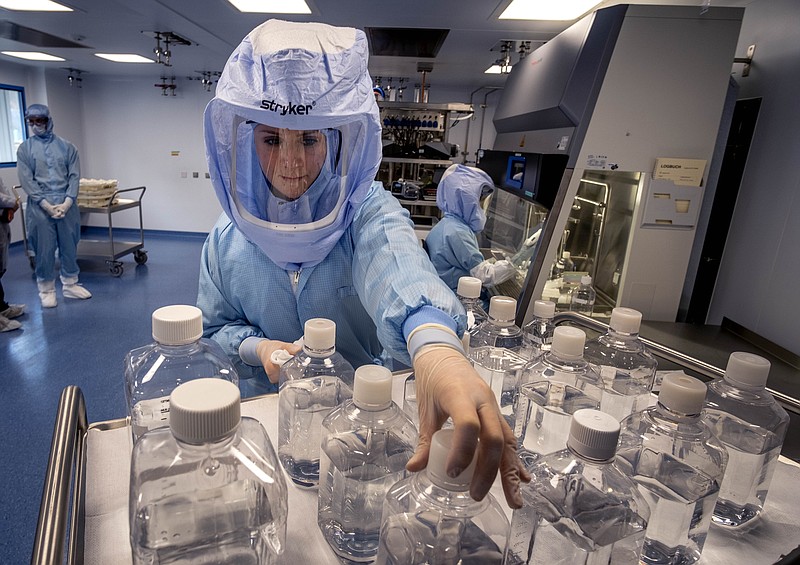 FILE - In this March 27, 2021 file photo a laboratory worker simulates the workflow in a cleanroom of the BioNTech Corona vaccine production in Marburg, Germany, during a media day. Ugur Sahin, BioNTech's chief executive, which developed the first widely approved COVID-19 vaccine with U.S. partner Pfizer, said Europe can achieve 'herd immunity' against the coronavirus within the next four months. (AP Photo/Michael Probst, file)

Pfizer, buoyed by a huge jump in sales for its covid-19 vaccine and solid first-quarter performance across most of the company, raised its 2021 financial forecast sharply after blowing past Wall Street expectations.

The company, along with its German partner BioNTech, now anticipate sustained revenue from their covid-19 vaccine with the world far from herd immunity against the virus. New contracts to supply vaccines to countries as far out as 2024 continue to be signed.

Pfizer on Tuesday almost doubled its sales projections for the vaccine this year, from $15 billion to roughly $26 billion. The partners expect to be able to deliver about 2.5 billion vaccine doses this year, including 300 million doses for the U.S., and already are prepping for what could become annual booster shots.

Pfizer reported quarterly net income of $4.88 billion, or 86 cents per share, on Tuesday. That was up from $3.36 billion, or 60 cents per share, in the same period last year, when the global coronavirus pandemic began triggering lockdowns, and doctor visits, diagnostic tests and new prescriptions for other medicines dropped significantly.

Sales of cancer drugs jumped 18% in the quarter and sales of medicines administered in hospitals rebounded 11% as patients got treatments delayed by hesitance to go to hospitals swamped with covid-19 patients. Sales of clot preventer Eliquis jumped 26% to $1.64 billion.

Once viewed as a marketing machine for blockbusters like Viagra and cholesterol fighter Lipitor, Pfizer has transformed itself into a research powerhouse in drugs for cancer and rare diseases -- and vaccines.

Pfizer got into the low-profile, low-profit vaccine field in 2009 when it acquired Wyeth and its then-experimental pneumococcal vaccine. That vaccine, Prevnar, which protects against ear, bloodstream and other pneumococcal infections, was approved by the U.S. the following year. It became the world's most lucrative vaccine with annual sales of about $5 billion -- once unheard of.

"Investors were skeptical of the Wyeth acquisition because vaccines were a sleepy area with lots of risk and rarely enough profit to justify spending money on them. Pfizer proved them wrong," said Erik Gordon, a business professor at the University of Michigan.

Pfizer began developing more vaccines and building up expertise. Then in 2018 it began a partnership with BioNTech focused on creating a flu vaccine with a then-new technology called mRNA for short. This vaccine type uses genetic material called messenger RNA rather than an inactivated virus to teach the immune system to produce antibodies if the real virus infects someone.

But while the flu vaccine was still in testing, the coronavirus hit and the companies switched to use the technology for a vaccine against it. Their vaccine has proved to be more than 90% effective and has rapidly won emergency approval in country after country while avoiding the manufacturing delays and safety questions stinging some rivals.

"Partnering with BioNTech was a stroke of genius or of good luck," Gordon said.

Pfizer, which splits vaccine costs and profit with BioNTech, reported $3.46 billion in first-quarter sales in all but three countries; BioNTech will report the remaining revenue Monday.

Some patient advocacy and consumer groups now accuse covid-19 vaccine-makers of profiteering as they've only pledged to stick to nonprofit prices until the pandemic emergency ends. Some want patents suspended to enable poor countries to get cheaper vaccines sooner.

On a conference call Tuesday, Pfizer noted its three price tiers for the vaccine, depending on each country's financial situation. In the U.S., Pfizer charges $19.50 for each dose, far below what Prevnar and many other vaccines cost. 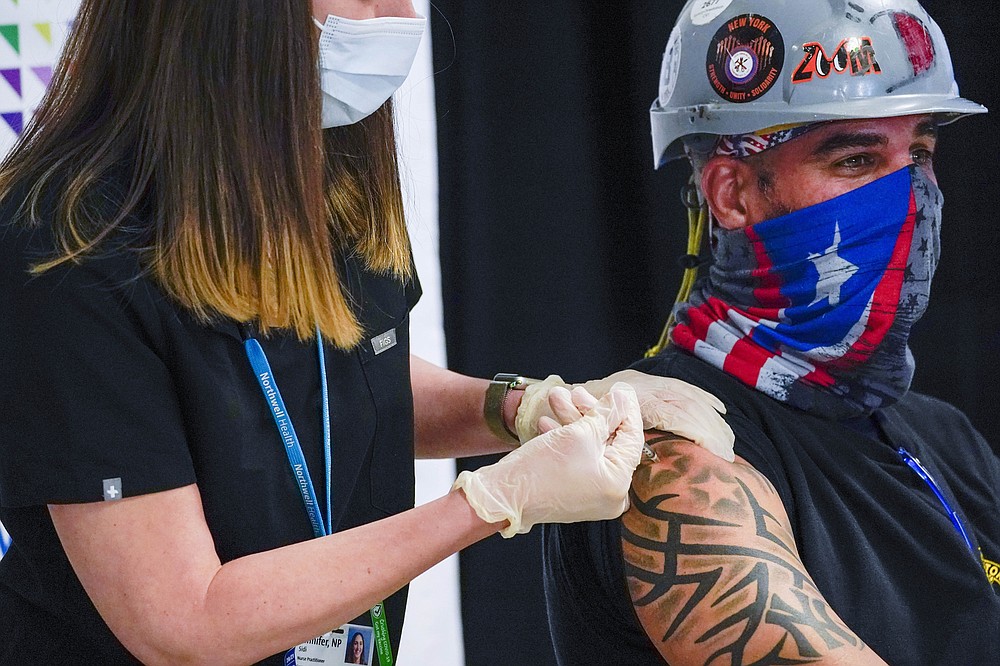 FILE - In this April 14, 2021 file photo, a Northwell Health nurse injects Local 28 Sheet Metal Worker Demetrius Buttelman with the first dose of the Pfizer vaccine during a news conference, at the Belmont Park in Elmont, N.Y. The state recorded 43,000 new cases in the week that ended Saturday, April 17, 2021. That's the lowest number in a seven-day period since Thanksgiving. (AP Photo/Mary Altaffer, Pool, File) 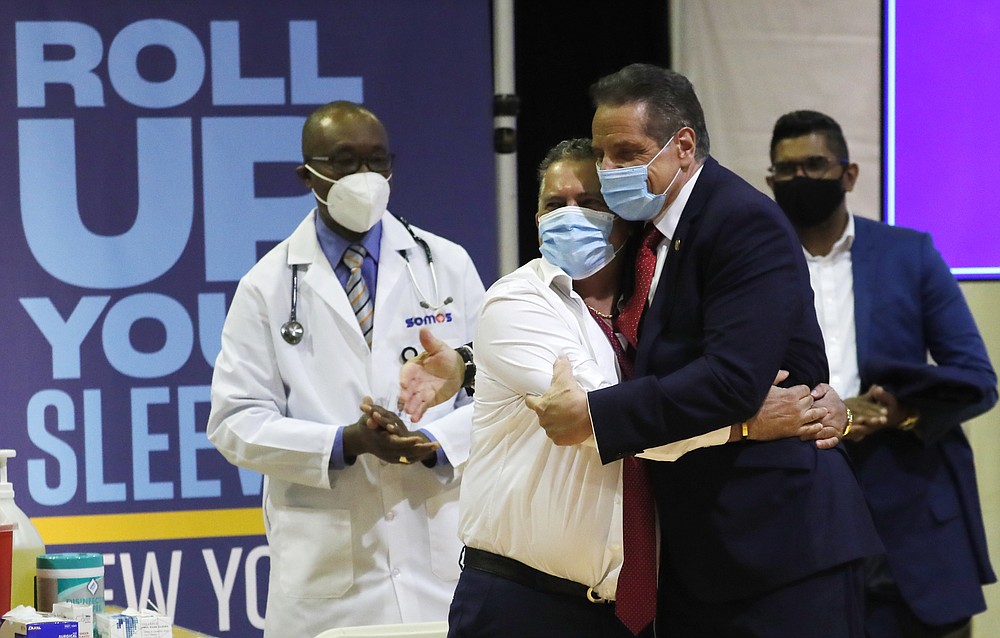 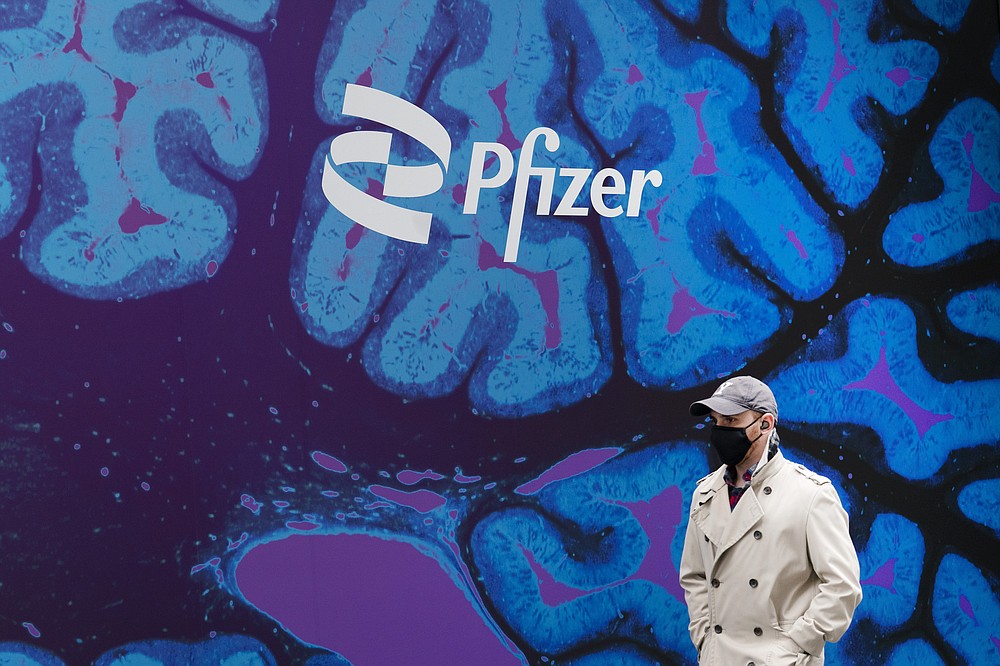 A man walks by Pfizer headquarters, Friday, Feb. 5, 2021 in New York. Pfizer, buoyed by a huge jump in sales for its COVID-19 vaccine and solid first-quarter performance across most of the company, hiked its 2021 financial forecast after sharply after blowing past Wall Street expectations, Tuesday, May 4. (AP Photo/Mark Lennihan)
ADVERTISEMENT