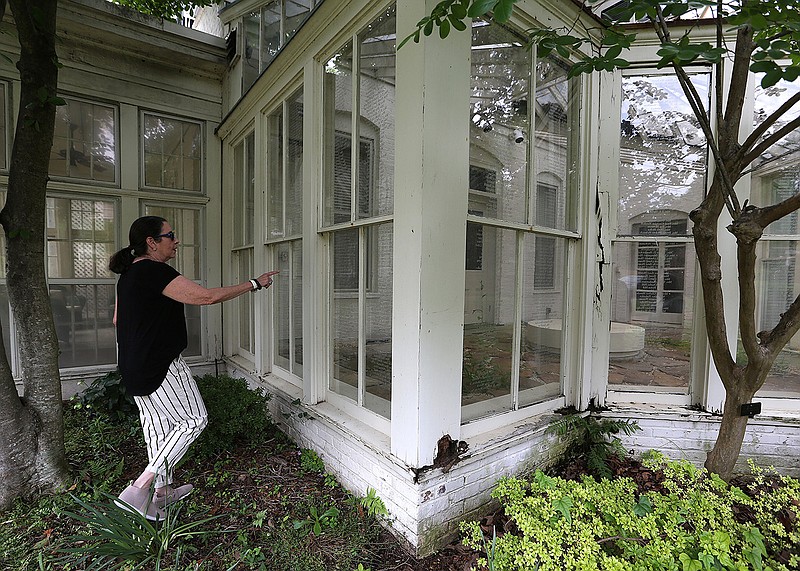 Capi Peck points to her grandmother’s name Tuesday on the list of the Women’s Emergency Committee at the Terry House in Little Rock. On Wednesday, Preserve Arkansas came out with its list of most endangered properties in Arkansas, and the Terry mansion is on the list. (Arkansas Democrat-Gazette/Thomas Metthe)

It's one of the oldest buildings in Little Rock and one of the most endangered structures in the state.

The Pike-Fletcher-Terry House, a large Greek Revival residence built in 1840, is vacant and suffering from years of deferred maintenance, according to Preserve Arkansas, which named it Wednesday as one of the most endangered places in Arkansas for 2021.

The mansion at 411 E. Seventh St. needs about $1 million in repairs, according to a news release from Preserve Arkansas, citing an estimate from 2017.

"Now, deferred maintenance has taken its toll, and the building's exterior is showing signs of significant disrepair," according to the news release. "Water penetration and foundation issues are causing wood and brick failure that is especially evident at the front porch, solarium, and eaves. For every day these issues go unaddressed, the repairs grow more costly, putting the home's future in jeopardy."

The Terry mansion has gotten a good deal of social media attention, in particular. But Preserve Arkansas wants to reach a larger audience.

"With this listing, Preserve Arkansas hopes to raise awareness of the home's significance and the need for preservation to a wider audience, encourage emergency repairs, and help to find a sustainable use for the house that will benefit all stakeholders," according to the release.

In 1964, the Terry mansion was deeded to the city of Little Rock, specifying that the house be used for the Arkansas Arts Center, which was renamed the Arkansas Museum of Fine Arts this year, Charles Witsell Jr. wrote for the Encyclopedia of Arkansas in an entry about the Pike-Fletcher-Terry House.

The Arkansas Museum of Fine Arts is constructing a new building that's scheduled to open in May 2022.

Peck said the city is prepared to assume operation of the Terry house from the Arkansas Museum of Fine Arts, but an endowment for its upkeep would need to accompany the house.

Peck said there was an endowment for upkeep and maintenance of the house, and that endowment was about $2 million back in the 1980s.

"The city would then bring it back under its direction if the endowment comes with it," said City Attorney Tom Carpenter. He said city officials have been discussing the matter with heirs of the Terry family.

The Pike-Fletcher-Terry House is located on 12 lots in the heart of Little Rock's MacArthur Park Historic District. According to Preserve Arkansas, the house is "the state's premier example of residential Greek Revival architecture."

"The mansion is perhaps the city's most important historical home, and it is falling to ruin," according to the Friends of Terry Mansion Facebook page.

"This building, generally known as the Terry Mansion, is an icon of Arkansas political, cultural and civil-rights history," historian Tom Dillard wrote on Feb. 7 in the Arkansas Democrat-Gazette. "It cannot be allowed to fall down -- or more likely [be] burned down by vandals or transients."

The house was constructed for Albert Pike.

Pike was a lawyer who played a major role in the development of the early courts of Arkansas, according to an Encyclopedia of Arkansas entry by Carl H. Moneyhon.

A poet and writer, Pike was also involved in Arkansas politics before the Civil War. During the war, he commanded the Confederacy's Indian Territory, raising troops there and exercising field command in one battle, wrote Moneyhon.

Pike left Arkansas after the Civil War. In 1871, he deeded his home to his daughter, Lillian Pike, according to Preserve Arkansas. She leased the building to the Arkansas Female College from 1873 until 1889, when it became the home of the Fletcher family.

John G. Fletcher and his wife, Adolphine Krause Fletcher, had three children: Adolphine, John Gould and Mary. The elder John Fletcher was a prominent banker and cotton broker, and served as the mayor of Little Rock from 1875 to 1881, according to Preserve Arkansas.

Two of the Fletcher children, Adolphine and John Gould, became well-known Arkansans in their own right. John Gould Fletcher Jr. won the Pulitzer Prize for Poetry in 1939. Adolphine married U.S. Rep. David D. Terry, and they lived in the family home for most of their lives, according to Preserve Arkansas.

"It also was the meeting place for the Women's Emergency Committee to Open Our Schools during the aftermath of the desegregation of Little Rock Central High School in 1957," wrote Witsell.

"Although the house was remodeled several times, it retains much of its original Greek Revival character. The Pike-Fletcher-Terry house was listed on the National Register of Historic Places on August 21, 1972."

In 1977, the Arts Center rehabilitated the house to use as gallery and support space, wrote Witsell. It opened as the Arkansas Arts Center Decorative Arts Museum in 1985.

In 2004, it became the Arkansas Arts Center Terry House Community Gallery, a multipurpose gallery in which local and regional art was shown. However, it was later closed, and now sits empty and unused, Witsell wrote.

The site of Wednesday's announcement, the former Woodruff Elementary School in Little Rock, was included on the 2017 most endangered list, but it's now being rehabilitated as apartments and restaurant space, according to the news release.

Founded in 1981, Preserve Arkansas is the only statewide nonprofit advocate for the preservation of Arkansas' historic places.

"The Most Endangered Places Program began in 1999 to raise awareness of historically and architecturally significant properties facing threats such as demolition, deterioration and insensitive development," according to the news release.

"Preserve Arkansas solicited nominations from individuals and organizations throughout the state. The list is updated each year to generate discussion and support for saving the places that matter to Arkansans."

More information is available at preservearkansas.org. 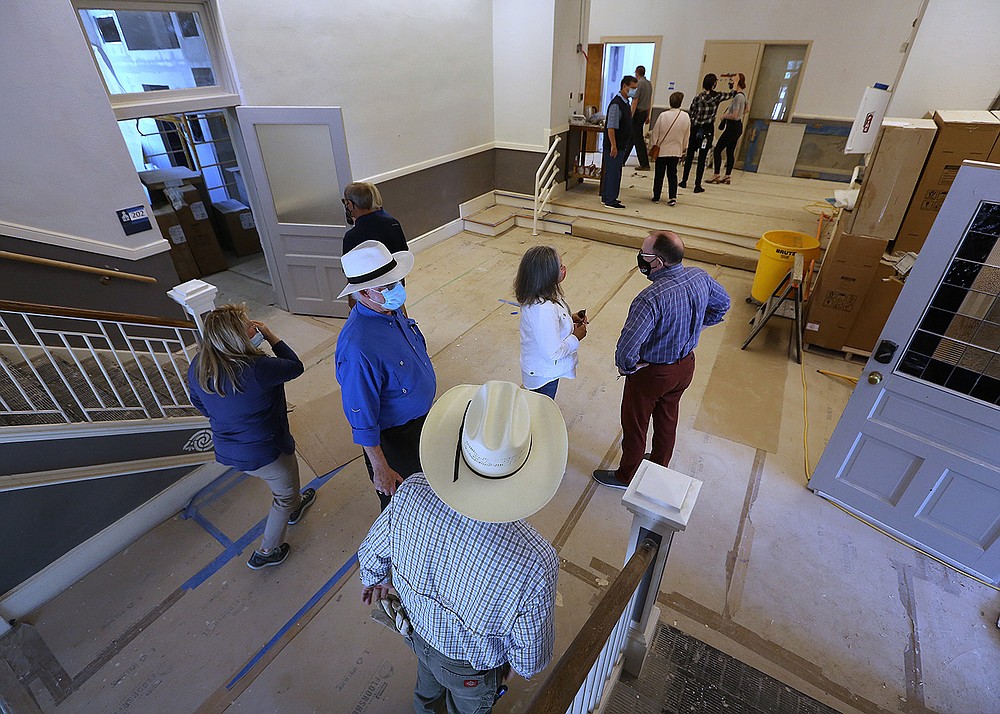 Visitors tour the Woodruff School after the announcement of Preserve Arkansas’ 2021 Most Endangered Places list during a news conference outside the building Wednesday in Little Rock. The Woodruff School was included in the 2017 Most Endangered Places list. It is being rehabilitated with federal and state historic tax credits, and will offer apartments and restaurant space. (Arkansas Democrat-Gazette/Thomas Metthe)
ADVERTISEMENT