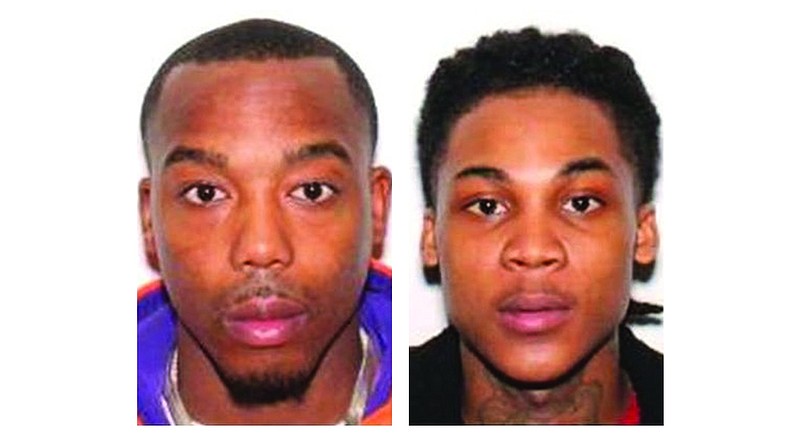 Brandon Burnett and Tirek Langel are shown in this undated composite photo.

One of two men who surrendered to police during an investigation into a March 11 shooting at Saracen Casino Resort pleaded innocent Wednesday to five counts of second-degree unlawful discharge of a firearm in a vehicle (a Class B felony) and three counts of aggravated assault (Class D) before Judge Jodi Dennis in Jefferson County Circuit Court.

Brandon Burnett, 27, is accused of shooting from a Nissan Maxima in the parking lot of the casino after security guards escorted him and four others out because of allegations of inappropriate behavior. Three of the men were released after being questioned by police. According to an affidavit, one of those men said that Burnett drove the vehicle, pointed a gun outside a window and fired at least two shots toward the officers, who returned fire.

Security guard Dakota Goforth suffered a gunshot wound in the lower part of his abdomen. He was treated and released from Jefferson Regional Medical Center.

Burnett agreed to a search of his home and vehicle four days after the shooting. He is out on $150,000 secured bond and is not to possess any dangerous weapons, indulge in intoxicating liquor or drugs, or make contact with Saracen Casino.

Prosecutors filed formal charges against Tirek Langel, 22, who was accused of exiting the vehicle and shooting toward security guards. Langel surrendered days after Burnett did.

Langel was arraigned April 7 and faces five counts of a terroristic act toward an occupiable structure (a Class Y felony); one count of first-degree battery (Class B); two counts of aggravated assault (Class D); and one count of possession of a firearm by certain persons (Class B). Langel pleaded guilty to possession of a controlled substance in October and was sentenced to 60 months' probation, and he also served jail and probation time for his role in a November 2016 residential burglary.

A jury trial for both Burnett and Langel has been scheduled for Oct. 25.