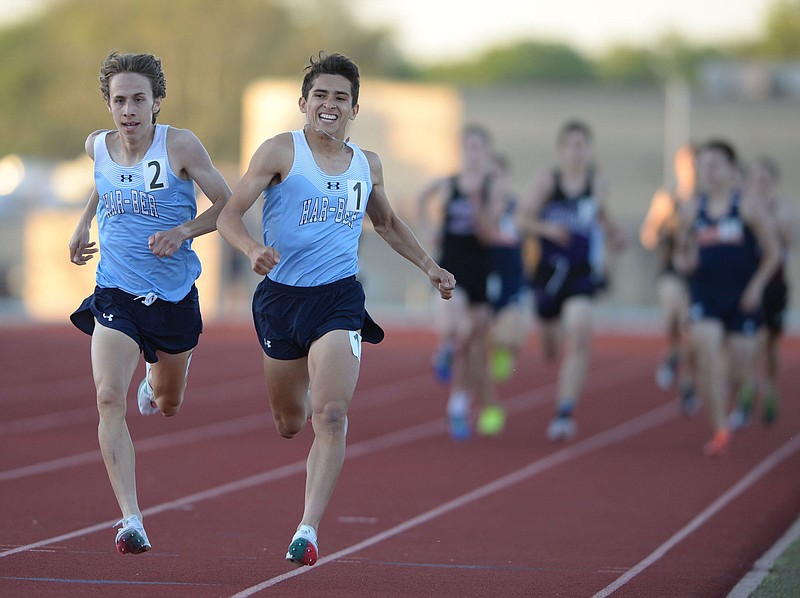 Springdale Har-Ber seniors Anthonie Alvarez (left) and Reuben Reina have pushed each other all season. They’ll head into today’s Class 6A state track and field championship with the same goal — to break the state record in the boys’ 800 meters. (NWA Democrat-Gazette/Andy Shupe)

BENTONVILLE -- When a high school track athlete begins a quest to break a state record, they are usually on a proverbial island and can't really seek much help from other runners.

That hasn't been the case for Anthonie Alvarez and Reuben Reina this spring. The two Springdale Har-Ber senior runners have pushed each other the entire season, and they head into today's Class 6A state track and field championship at Rogers Heritage with the same goal in mind -- to break the 6A state record in the boys' 800 meters.

In order to do that, both runners must run that distance in less than 1 minute, 52.54 seconds -- the time ran by current record holder John Feltner of Russellville in 1970. A little faster than that is the state overall record of 1:51.94 set by Robert Bradley of Crossett in 1985.

"I feel really grateful to have a teammate in that capable of shape," Reina said. "I've been training with him all year, so it's been good to see him grow as a runner. This is actually his first year as a distance runner, and he's gotten a lot better and stronger throughout the year.

"Personally, he has a lot of speed, and he holds me accountable."

The Wildcats duo's quest began to take shape in March, when they ran the 800 together in the Springdale Invitational. Alvarez won the race with his time of 1:57.49, while Reina was right behind him at 1:58.20.

The two didn't run the 800 again until last month at the McDonalds Relays in Fort Smith. Alvarez won again, with his time cut down to a personal-best 1:54.24, while Reina was right behind at 1:54.54.

"That race, we came into it and said let's see how fast we can push out," Alvarez said. "'After that race, we regrouped and talked about the race and whether or not we could go faster, and we agreed we can go a little bit faster. After looking at the state record, we realized it's going to be a really hard time to reach.

"But we also know that we're going to push each other really hard. We've had plenty of good training and been able to do a lot of speed work. Our coaches did an excellent job of preparing us. We have that confidence of running that time, and seeing us get closer and closer to that time is what's pushing us even further."

The two took another shot at a better time last week during the 6A-West Conference meet at Bentonville, and the only 800 was the only event they ran that day. The warmer temperature may have affected them, but it was their closest margin as Alvarez won at 1:55.94 while Reina was at 1:55.98.

There will be also more races for the two of them to worry about throughout today's meet. Alvarez will also run the 1,600, where he has a personal-best time of 4:24.09, while Reina could be running the 1,600 and the 3,200 and has a shot at the state record in the latter after his time of 9:09.58 during the West Relays in Centerton.

"That was the fastest 3,200 time in Arkansas," Har-Ber coach Chris Clinton said. "And it was all by himself. He had to pace himself out with me yelling out his times. But with them together, it just makes them so much better. They are so much faster together. It helps them in practice, and it transitions over really good on the track.

"The 800 is definitely Anthonie's race, and he's better at it because he's so geared for it. He will run the 1,600 before he does the 800. Honestly, I couldn't tell you which race Reuben is best at. If he has to do all three races, it's going to be a gut-check for him."