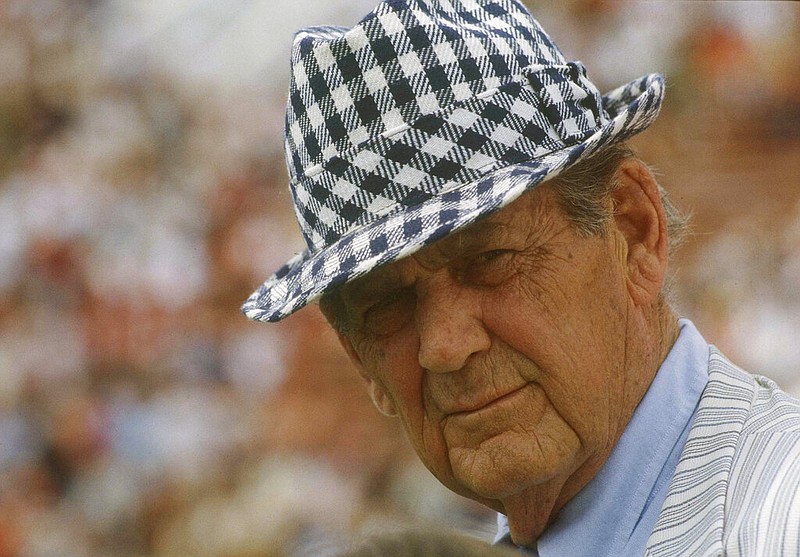 Paul "Bear" Bryant, the longtime head football coach at the University of Alabama, is shown in this undated file photo. (AP file photo)

A YouTube video of the Bryant/Bell ad has been viewed more than 300,000 times. Last year, CoachTube.com tweeted the video, garnering 210 retweets and nearly 500 “likes.”

The ad begins with Bryant, clad in a crimson sweater, hanging up the phone in his office.

“One of the first things we tell our players is to keep in touch with their families. And when our freshmen first arrive, we ask them to write a postcard home, right then,” Bryant says in a gravelly voice as the camera gradually gets closer.

“You know, we keep them pretty busy, but they always have time to pick up the phone and call. And it’s really important to keep in touch.

“Have you called your mama today? I sure wish I could call mine.”

Legend has it that Bryant, who died in 1983 at the age of 69, veered away from the script and ad-libbed the last line.

[Video not showing up above? Click here to watch » https://www.youtube.com/watch?v=0Hq9wfYb13U]

The ad ends with a vocalist singing South Central Bell’s slogan, “Reach out and touch someone.”

Bryant’s mom was Ida Mae Kilgore Bryant of Moro Bottom, Ark. He was the 11th of her 12 children and grew up to play college football at the University of Alabama.

When asked why he was leaving Texas A&M for Tuscaloosa, Bryant had a simple answer: