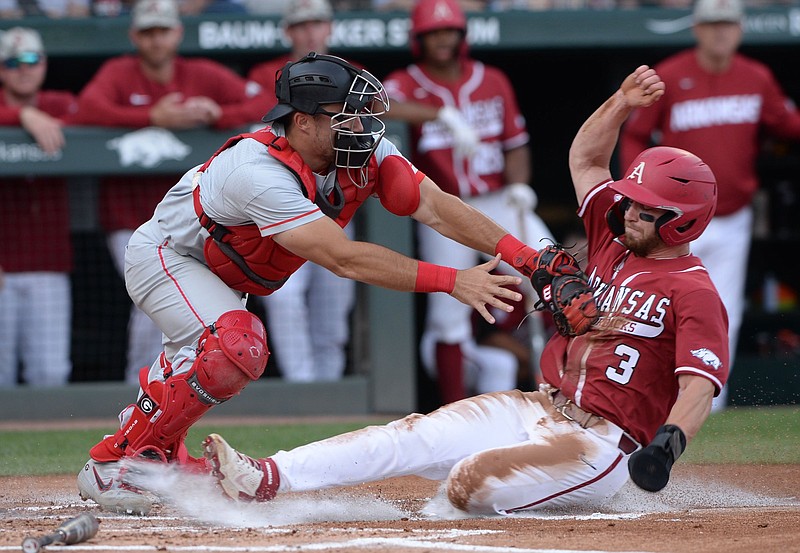 Arkansas left fielder Zack Gregory (3) is tagged out Saturday, May 8, 2021, by Georgia catcher Corey Collins while attempting to score on a fly ball out to center field during the first inning of play against Georgia at Baum-Walker Stadium in Fayetteville. Visit nwaonline.com/210509Daily/ for today's photo gallery. .(NWA Democrat-Gazette/Andy Shupe)

FAYETTEVILLE -- The SEC's best fielding team committed a pair of critical errors on the same play to let Georgia back in the game, then Bulldogs' outfielder Ben Anderson hit a two-run home run for the go-ahead runs in a 7-3 victory over the University of Arkansas on Saturday night.

The Bulldogs snapped a five-game road losing streak to the No. 1 Razorbacks before a crowd of 7,645 at Baum-Walker Stadium on a windy night.

[Video not showing up above? Click here to watch » https://www.youtube.com/watch?v=F5LKqIYeJ7g]

Arkansas (35-9, 16-7 SEC) fell into a four-way tie atop the league race along with Mississippi State, Tennessee and Vanderbilt. Georgia (28-17, 11-12) won its third road game of the season against a No. 1-ranked team after downing Vanderbilt on April 8 and 10.

Freshman left-hander Jaden Woods (3-0) was an ace out of the bullpen, providing 4 innings of 2-hit relief with 1 walk and 3 strikeouts while holding Arkansas scoreless from the third into the seventh inning.

Perhaps the game's most pivotal play came a few minutes after home plate umpire Ronnie Teague was forced from the game after taking a hard foul ball off the upper part of his mask with Arkansas leading 3-1 in the top of the fifth.

With a runner at third base and two outs, Arkansas starter Peyton Pallette jammed Georgia's two-hole hitter Josh McAllister, who had homered in the first inning. McAllister hit a dribbler toward third base that Pallette rushed to field bare-handed before throwing errantly past first base and down the right-field line, allowing the run to score.

McAllister kept chugging around second base in the loose-ball scenario, and second baseman Robert Moore air-mailed the relay over third base into the netting over the Arkansas dugout, allowing McAllister to score the tying run.

"It was just a bad play all the way around," Arkansas Coach Dave Van Horn said. "Bottom line, Pallette makes a pretty good pitch, jams the guy, he hits it up the third-base line and he should've just fielded the ball and gotten back up on the mound and tried to get the last out. Instead he tried to throw it, and it was just a mistake."

Georgia Coach Scott Stricklin talked up the wild swinging bunt play and the work by Woods.

"If you look at the scoreboard it was 7-3, but it was never comfortable," Stricklin said on the Georgia Radio Network. "With this crowd, I mean you've got 10,000 people and they're on you pretty good.

"I think Jaden Woods was a huge key to that to settle them down when it was 3-1 and keep us right there. We got lucky on the McAllister play, that he was able to [hit an] infield swinging bunt and somehow get all the way. I mean that's a little league home run."

Georgia piled on two more runs in the ninth inning off Zebulon Vermillion on catcher Fernando Gonzalez's slug bunt up the middle with runners on first and second, and McAllister's hit by pitch against Heston Tole with the bases loaded.

The Bulldogs had another runner cross the plate when Evan Taylor's inside pitch to Garrett Blaylock caromed off home plate umpire Mayhue Edwards, but the run was disallowed and Blaylock called out because on-deck hitter Riley King touched the live ball for an interference call.

The Bulldogs struck out 16 times against six Razorback pitchers, including eight in the first four innings against Pallette. However, they hit .412 with runners on base, .500 (5 of 10) with runners in scoring position and .308 with two outs.

"Their bullpen shut us down," Van Horn said. "We didn't score a run.

"We left too many runners on base the first three or four innings of the game. We had a chance to build up a big lead. It came back to get us."

The Razorbacks had a scoring chance in the seventh by loading the bases against Woods and ace reliever Ben Harris with two outs, but could not capitalize. Woods walked Matt Goodheart, then Harris hit Cayden Wallace with an 0-2 pitch and walked Brady Slavens on four pitches.

After falling behind Christian Franklin 2-0, Harris rallied to get a swinging strikeout on outside heat. The lefty Harris finished up for his third save.

Georgia took an early lead on McAllister's towering home run with one out in the first inning. McAllister's ninth home run landed in the Arkansas bullpen beyond the left-field wall and was the third allowed by Pallette.

The Razorbacks got the run back in the second inning against the 6-6 righty Cannon. Slavens walked to lead off and moved to third on Franklin's double. Moore brought home the tying run with a sacrifice fly, but Cannon avoided further damage by retiring the next two batters with Franklin on third.

The Razorbacks got busy again in the third inning, eventually knocking Cannon out of the game. Jalen Battles singled to left field to open the frame, then Zack Gregory walked on four pitches.

Goodheart jumped on a first pitch and drilled it to left-center field, driving in Battles with his fourth double. With one out, Slavens' chopper to second base brought home Gregory for a 3-1 lead. Cannon then walked Franklin and got the early hook, bringing on the hard-throwing lefty Woods.

Pallette had retired six in a row entering the fifth inning before a bizarre series of events went against him.

Eight-hole hitter Cole Tate led off the frame with a single. On a 2-0 pitch, the catcher Gonzalez fouled a 93 mph fastball off the mask of Teague, sending the mask flying and putting Teague onto his backside. After being tended to by the athletic trainers for both teams and physician Al Gordon, Teague was escorted off the field and the second base umpire Edwards put on the home plate gear, leading to a 15-minute delay.

Pallette got a double-play grounder to Battles at shortstop to get on the brink of escaping before his throwing error touched off the two-run play.

The left-handed hitting Anderson jumped on the first pitch he saw from southpaw Zack Morris for a two-run home run with one out in the seventh to pin the loss on reliever Ryan Costieu (6-2), who walked Tate to open the inning.

NO. 1 ARKANSAS BASEBALL vs. GEORGIA

Georgia 2B Josh McAllister made a gold-star defensive play to open the bottom of the sixth, sprinting into medium-depth right field and laying out horizontally to rob Brady Slavens on a flare. ... Both teams had early defensive gems: Arkansas 2B Robert Moore ranged to his left in the hole to field Corey Collins' sharp grounder, then spun and fired a strike to SS Jalen Battles for a force out. Georgia 3B Garrett Blaylock dove to his left to field a Battles' grounder, then hopped up and threw a strike to first. ... Moore's second-inning sacrifice fly was the SEC-leading 28th for Arkansas.