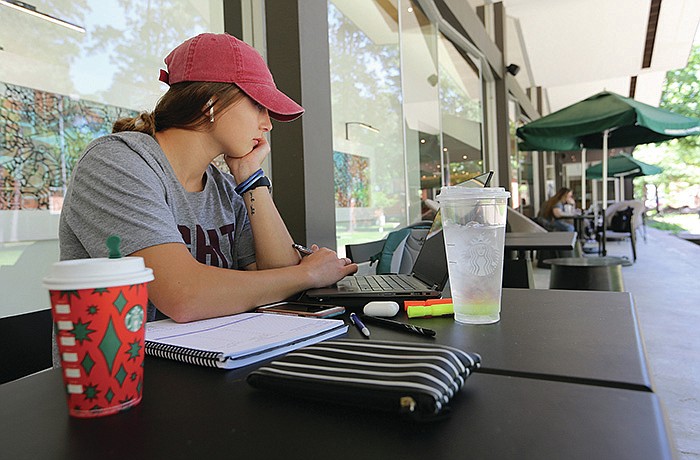 University of Arkansas at Little Rock sophomore Shelby Dunlap of Pea Ridge works on her computer at the UALR campus Starbucks on Thursday, May 6, 2021. (Arkansas Democrat-Gazette/Thomas Metthe)

College students at the state's four-year public universities returned for their second year at higher rates compared with other recent freshman classes, according to fall 2019 retention data from the state Division of Higher Education.

Retention rates increased at eight of 10 public universities in a time period that overlapped with the pandemic, rising overall to 77.1% from 75.2% a year earlier.

Providing economic support, as well as going into "hyperdrive" in talking to students, may have fueled the rising college retention rates, said Willis Jones, an associate professor of higher education who is set to join the University of Miami this fall. Jones is currently a professor at the University of South Florida.

Federal coronavirus relief funds have included emergency grants for college students, with schools disbursing the money. Universities also provided reimbursements to students affected by dorm closures, and schools used existing funds for emergency student support to offer help to those who needed it after covid-19 emerged in Arkansas last spring.

"I think a lot of students who may have been on the fence felt like with some of that extra financial support, going ahead and remaining in their sophomore year would be advantageous for them," Jones said.

Nyah Peyton, 20, said she stayed for her second year at UALR after a brief moment of economic concern related to the pandemic.

She lost her job with the temporary closure of clothing store Forever 21.

But with the help of her father, she said, she filed for and began receiving unemployment aid.

"I didn't feel the pressure to take a year off for a gap year because I was still earning an income," Peyton said.

The retention numbers boost the outlook for schools but don't offset undergraduate enrollment declines experienced by many universities in the state, said Alisha Lewis, a spokeswoman for the state Division of Higher Education.

"First time entering students were the source of the overall enrollment decline and that has been the case nationally, as well," Lewis said in an email.

The fall-to-fall rates for four-year schools are based on students who entered as first-time, full-time, bachelor's degree-seeking students, according to a report given April 23 to the state Higher Education Coordinating Board.

A rate for community colleges in the state was 58% for a fall 2019 cohort of 6,633. That rate hasn't varied by more than 1 percentage point for the past five years of state data.

UALR in recent years has taken "a very data-informed planning approach to addressing why our students were stopping out and dropping out," Finzer said

"We used a portion of our CARES funding to purchase laptops and webcams and microphones in a loaner program for our students," Finzer said.

Peyton, a marketing major at UALR, said she began the pandemic recovering from meningitis and last summer also found herself, as an African American woman, deeply upset by the death of George Floyd, a Black man killed while in police custody in Minnesota.

"Sometimes we don't recognize that it takes a toll on us," Peyton said, referring to the constant TV coverage.

As a student, she also worried about online learning and working to keep focused, she said.

After completing her sophomore year on track to graduate in four years, "I do feel a sense of accomplishment," Peyton said.

Among the public four-year schools in the state, the University of Arkansas at Monticello had the biggest increase in its year-over-year retention rate, according to state Division of Higher Education data.

"This is something that UAM has been working on for quite some time," said Crystal Halley, the university's vice chancellor for academic affairs. The university has an open admissions policy, meaning that no minimum college-entrance exam score is required to enroll.

Halley said that in fall 2019, UA-Monticello fully implemented what it calls its Pathways initiative. This aims to place students in a degree track "based on student skill sets," according to the university's catalog.

The Pathways program "creates multiple opportunities for any of our applicants to find where they may be most successful," said Halley. UA-Monticello offers technical degree and associate degree programs, in addition to bachelor's degrees.

Halley said UA-Monticello hired a professional advising staff in 2016, adding that communication between advisers and faculty members has been a significant factor in the rising retention rates at the university.

It was "very hard to tell" what fall 2020 enrollment would look like, Halley said, adding that many students delayed in registering for the fall.

High winds from an April 2020 storm also knocked out power for days, adding to difficulties, she said. UA-Monticello turned to telephone calls and text messaging to reach out to students and help them enroll for the fall, Halley said, adding that this has become a typical part of student outreach efforts.

Jones, the higher education professor, said colleges had major concerns last spring about how the pandemic would affect their enrollments.

"There was a belief that a lot of students wouldn't reenroll," Jones said.

Data such as that in Arkansas shows that efforts at retaining students paid off, even though significant numbers of potential students hesitated to enroll during a pandemic, Jones said.

"Most of the research on college student retention would point to the importance of students feeling a sense of belonging within an institution and feeling like they matter," said Jones.

The pandemic may have led to some lasting lessons for colleges, Jones said.

As far as communicating, Jones said he thinks using technology to reach out to students one-on-one could be here to stay.

"I see schools saying, 'We're going to have maybe a subset of our advisers who really specialize in virtual advising, with a goal to have that one-on-one contact,'" Jones said.

The University of Arkansas, Fayetteville topped all four-year public universities in the state with an 84.7% retention rate for a cohort of 4,562 students.

The two universities that had declines in retention rates were Arkansas Tech University and Henderson State University.