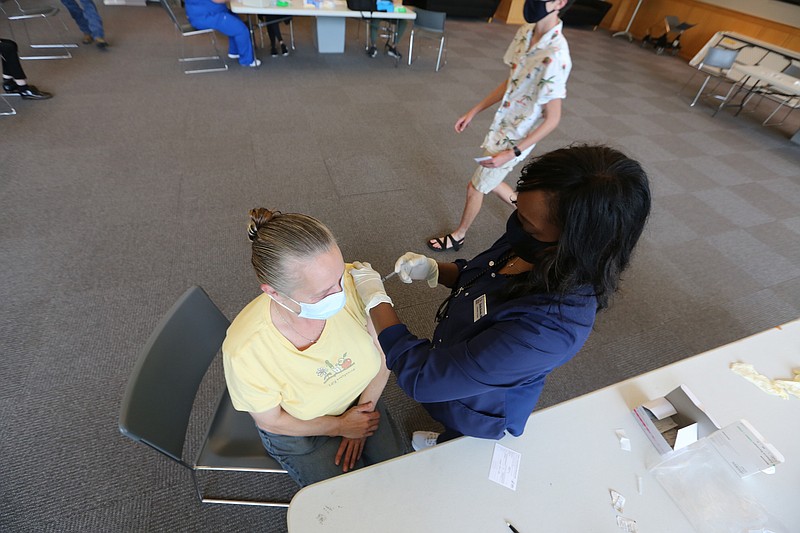 Kathy Davidson gets her first dose of the Pfizer vaccine from UALR nursing instructor Shelia Brooks during UALR's vaccine clinic put on by Don's Pharmacy on Wednesday, April 28, 2021, at the Jack Stephens Center in Little Rock. (Arkansas Democrat-Gazette/Thomas Metthe)

Arkansas' count of coronavirus cases rose Tuesday by 233 - a larger increase than the one the day before but smaller than the one a week earlier.

After rising by three on Monday, the number of Arkansans hospitalized with covid-19 remained at 169.

The state's death toll from the virus, as tracked by the Department of Health, rose by six, to 5,770.

Tuesday's increase in cases was smaller by 63 than the one the previous Tuesday.

As a result, the average daily increase in cases over a rolling seven-day period fell by about nine, to 194.

That was the first time the average had dropped below 200 since the week ending May 3.

Compared to a week earlier, the number of people hospitalized in the state with covid-19 was down by 23.

The number of the state's virus patients who were on ventilators, however, rose Tuesday by three, to 44, its highest level since March 20.

Arkansas should prioritize capital needs including broadband and cyber security with the $1.57 billion allotted to the state government through the American Rescue Plan, Gov. Asa Hutchinson said Tuesday.

The U.S. Department of the Treasury issued guidance on how states can use the covid-19 aid Monday night. Hutchinson described the funding as "discretionary within limits," because they allow for some flexibility.

Money should also be spent on meeting short-term humanitarian needs, but Arkansas’ spending will focus on one-time investments rather than programs that the state won’t have money to supplement once the federal funding runs out, according to Hutchinson.

A 14-member steering committee will play a role in deciding how the money is spent. Eight seats will be filled by cabinet secretaries or their designees, and six will be filled by members of the state House and state Senate, Hutchinson said. He signed an executive order setting up the panel Tuesday.

“We have to be methodical about this and not rushed,” he said.

The $1.9 trillion covid-relief package was signed into law in March by President Joe Biden.

Other allowable uses, according to the federal government’s guidelines, include infrastructure and preparation for a future pandemic, Hutchinson said.

Currently, all Arkansans age 16 and older are eligible for the vaccine.

On Monday, U.S. regulators expanded the use of Pfizer’s coronavirus vaccine to children as young as 12.

Hutchinson made the announcement at a charter school conference in downtown Little Rock. He referenced U.S. National Institute of Allergy and Infectious Diseases director Dr. Anthony Fauci’s statement that restrictions could be relaxed in the next year if people get vaccinated.

“We do not have mandates, but we have an urgent need,” he said.

He said afterward that the state would follow the direction of the Food and Drug Administration and that he would provide more details at his 1:30 p.m. news conference.

[Video not showing up above? Click here to watch » https://www.youtube.com/watch?v=pgc_BeCZWPc]

The Republican governor reiterated that it is his goal to get the vaccine into the arms of half of all Arkansans, which is about 1.5 million people.

This story has been updated. It was originally published at 9:37 a.m.

CORRECTION: Arkansas' increase of 233 coronavirus cases on Tuesday was smaller by 63 than the increase the previous Tuesday. An earlier version of this story incorrectly described the difference between the increases on those two days.