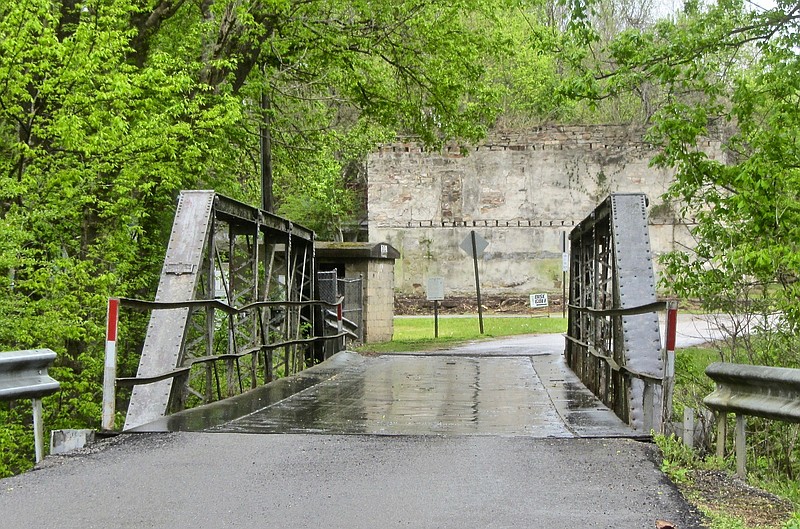 CALICO ROCK — Visitors find that Calico Rock has a definite split personality on the opposite sides of its Calico Creek.

West of the creek, the Izard County town seems to be more than holding its own, unlike most of Arkansas' smaller communities. Population has grown from 991 in 2000 to around 1,700 today, thanks in part to the efforts of the Calico Rock Organization for Revitalization. The town's main artery is the spine of Main Street Historic District, on the National Register of Historic Places.

East of the creek across a rustic wagon bridge lies the haunting contrast of East Calico Historic District. It's a ghost town of vacant buildings, most of them crumbling shells overgrown with weeds and vines. Although nobody lives in East Calico anymore, the properties are still privately owned. They survive as a somewhat haunted attraction. 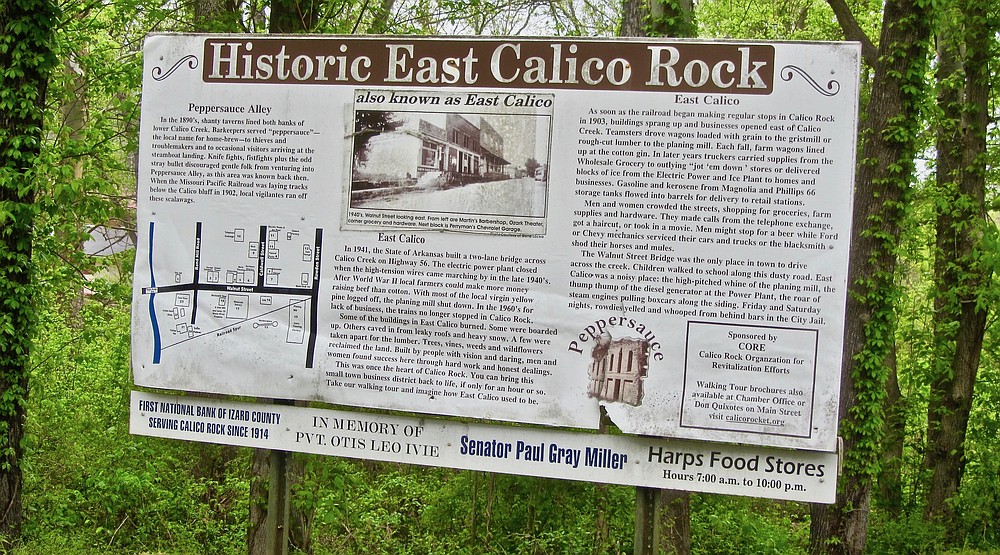 The history of East Calico Historic District is told at the entrance to the ghost town. (Special to the Democrat-Gazette/Marcia Schnedler)

East Calico is touted locally as "the only authentic ghost town within the city limits of a town in America" — an arcane distinction, perhaps, but still a distinction. Exhibits on both historic districts and other nearby locations in Izard County can be viewed at Calico Rock Museum and Visitor's Center, 105 Main St.

The museum, which includes a gallery of works by local artists, is expanding its displays this year. Its building was originally the Bank of Calico Rock, and visitors peering through a rear window can see the original teller cages. Across the street are stone buildings dating to the first quarter of the 20th century.

Calico Rock is perched on multihued White River bluffs that early settlers likened to colorful strips of calico cloth, leading to the beguiling name. It is pointed out at the museum that no other town anywhere in the world is named Calico Rock — not a huge surprise. 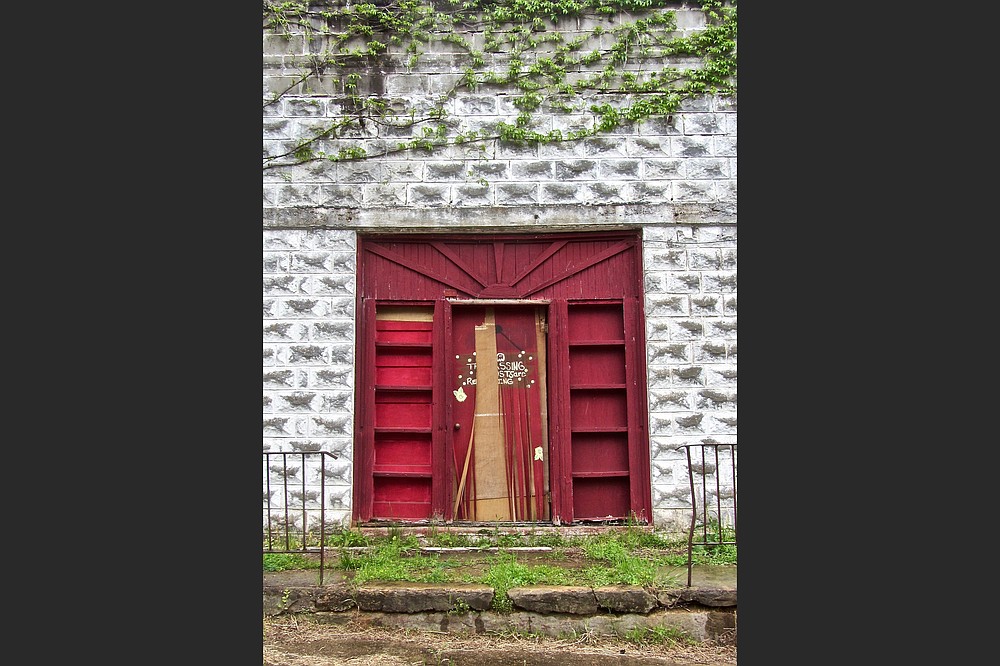 The door of a former funeral home stands ajar in East Calico Historic District. (Special to the Democrat-Gazette/Marcia Schnedler)

The two dozen derelict buildings in East Calico are best viewed on foot after crossing the old wagon bridge. Going inside the privately owned properties is prohibited. Making this ghost-town walk livelier is a set of signs detailing the onetime use of the structures.

Just across the bridge to the right, tall sheds were the site of a cotton gin from the 1880s to 1956. As the sign notes, "Every fall, the gin ran day and night. Cotton farmers raced to get their loaded wagons in line. Latecomers camped out all night waiting for their turn."

At the location of a former movie house, destroyed by fire in 1954, "the wooden seats were banked, admission was 10 cents and popcorn was 5 cents when Harold Wood opened the Ozark Theater in the early 1930s."

At Hall's Funeral Home, with its red door ajar, the posting reads: "In the 1920s, the mortician and his wife lived in the back. He 'ran off,' but she continued to operate the business for the new owner, Mr. McGuire. In the 1950s, Roman and Wilma Howard lived here and ran the business for owner Lawrence Hall. After the mortician embalmed a body, the family would lay out the deceased at home for viewing." 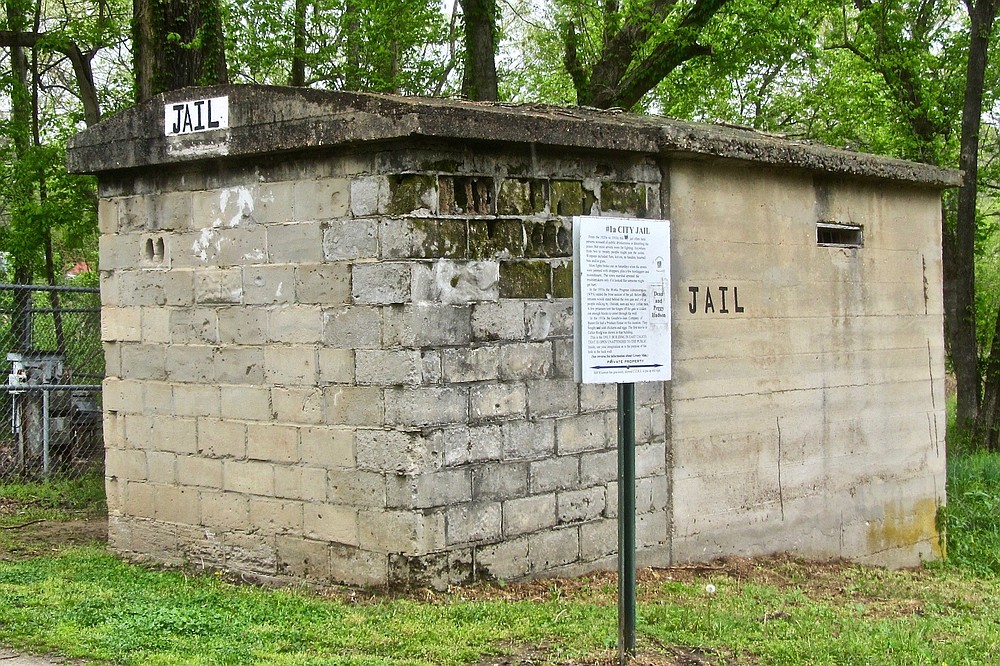 The old city jail was used in Calico Rock until the 1950s, mostly for brawlers. (Special to the Democrat-Gazette/Marcia Schnedler)

The old city jail, about the size of a storage shed, was used until the 1950s. It "often held persons accused of public drunkenness or disturbing the peace. But most arrests were for fighting. Anywhere from two to 20 people might join the melee. Weapons included fists, knives, ax handles, baseball bats and/or guns."

Briefly the town marshal in the 1940s, according to another sign, was William Luther Harris, known as "Greasy Slim." The nickname came because this eccentric vagabond was greased up from blacksmith's work. He "avoided bathing or washing his clothes. Once a year, he bought a new shirt and bib overalls, which he put on over the old ones. He slept on a cot in the grist mill or on the floor of the jail."

On the fringe of East Calico, Peppersauce Alley owes its name to shanty taverns of the 1890s, where "barkeepers served 'peppersauce' — the local name for home-brew — to thieves and troublemakers. Knife fights, fistfights plus the odd stray bullet discouraged gentle folk from venturing into Peppersauce Alley." 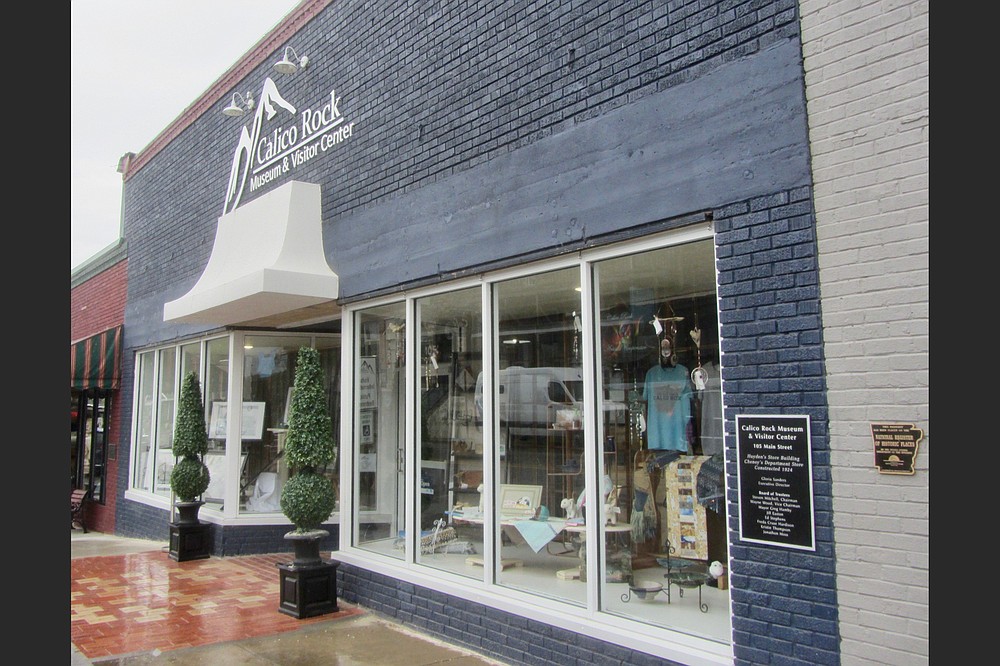 Gentle folk can venture into the alley these days with no trepidation — unless they happen to believe in ghost-town ghosts.

For more information, visit calicorockmuseum.com or call (870) 297-6100. The museum is open 10 a.m.-4 p.m. Tuesday-Saturday. Admission is free, with donations welcome.