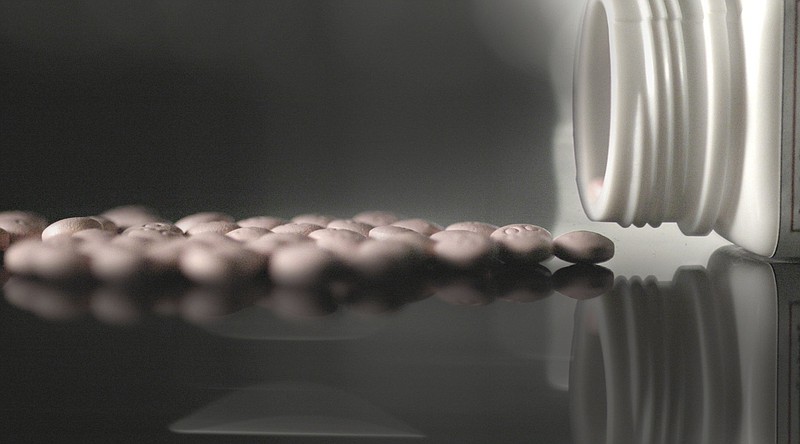 Pills spill from a bottle in a scene from the two-part documentary “Crime of the Century,” about the opioid epidemic, which premiered Monday and ends today. (HBO via AP)

NEW YORK — Not unexpectedly, given the subject matter, HBO's two-part documentary "The Crime of the Century" opens with a body bag.

It contained a man from San Diego — his remains carried away in the predawn hours after overdosing on fentanyl — one of nearly a half million Americans to die from opioid abuse since 2001.

Filmmaker Alex Gibney quickly widens the lens, however, for an explanation of how the drugs that caused the crisis came to be, how companies aggressively promoted and distributed them and how the government failed to act swiftly and effectively to save lives.

The story is exhaustive and often sickening, its scope recalling the examinations Gibney and his team have given in the past to Enron, to Scientology and, most recently, to the Trump administration's response to covid-19. "The Crime of the Century" started Monday and ends today.

"I felt that the whole idea of the crisis was being treated as if it were a spontaneous event that just couldn't have been helped," Gibney said. "What was missing was the element of crime, in particular the sort of broad, over-arching conspiracy."

The role of the Sackler family and their company, Purdue Pharma, in developing the prescription painkiller OxyContin is familiar territory. Gibney's film digs into the aftermath, including the push to get doctors to overprescribe the medication and the company's use of former government regulators to cripple serious oversight.

A former Purdue Pharma salesman, Mark Ross, tells how he got involved to make some money and help people with chronic pain. But when he grew concerned about abuses, his bosses told him to stay in his lane.

Gibney reports on a little-known memo prosecutors in Virginia drew up in 2006 that detailed Purdue Pharma's actions, its contents essentially hidden when the Justice Department reached a settlement. It was his "a-ha" moment, seeing the connections between OxyContin, heroin abuse and the development of fentanyl.

Asked for comment on "The Crime of the Century," a Purdue Pharma spokeswoman pointed to the company's recent proposed settlement in federal bankruptcy court, intended to clear thousands of lawsuits stemming from OxyContin.

"We remain focused on achieving a global settlement that would deliver more than $10 billion in value, including 100% of Purdue's assets and millions of doses of opioid addiction treatment and overdose reversal medicines, to claimants and communities across the country affected by the opioid crisis," the company said.

Gibney's Jigsaw Productions worked in tandem with The Washington Post on the documentary, and he credits the newspaper's journalists for helping draw connections and bringing stories of government to life.

Ross is a key character in Gibney's film, as is Joe Rannazzisi, a former federal Drug Enforcement Administration agent who saw his efforts thwarted and is trying to educate the public on what is going on, and Alec Burlakoff, former sales executive at the rogue company Insys Therapeutics, manufacturer of fentanyl.

With the storytelling ability of a born salesman, Burlakoff tells a frightening tale of a corporate culture where doctors were bribed and intimidated to pump out the dangerous drug. Money was the concern, not consequences.

Celebratory videos from company events bring the culture to life.

"He was able to cast all moral qualms to the side and rapaciously and relentlessly sell a drug that he knew was terrible for people, in ways that were utterly reprehensible," Gibney said. "But he takes us through the process step by step by step in a way that's just jaw-dropping. You understand ultimately how the crime works."

Gibney's film doesn't avoid the stories of a victim like Roy Bosley, showing in detail how opioids killed the Utah man's wife. Filmmakers also confront the doctor who ran the pain clinic where Bosley's wife was treated.

That story illustrates Gibney's focus on the people and companies responsible for creating addicts.

"If you understand the perps and what their motivations are, it helps you understand not only how crimes are committed but how to prevent them in the future," he said.

There is some good in these drugs, in limited doses for people who have undergone serious operations or are in end-of-life care, he said.

If it really is the crime of the century, will anyone pay?

"That's a good question," Gibney said. Companies that have been charged with wrongdoing will point, as Purdue Pharma has, to fines and settlements, he said.

Gibney believes that most of the people who have lost loved ones due to the opioid crisis mostly want an apology or, more significantly, the truth.

Most of the companies and executives involved, however, hide behind settlements that keep what happened essentially hidden, he said.

"When you evade and avoid the truth, you avoid a public reckoning," Gibney said. "That's why I make films like this, to say 'look at what happened. Apply it the next time you see a situation where something like this is coming. Don't be fooled.'"