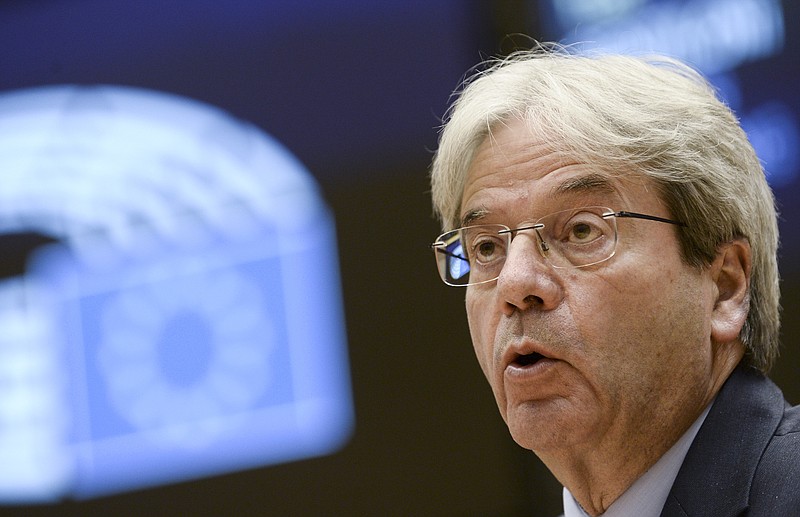 FILE - In this Wednesday, April 28, 2021 file photo, European Commissioner for Economy Paolo Gentiloni addresses the plenary chamber at the European Parliament in Brussels. The European Union's top economy official said Monday, May 10, 2021 that the measures the EU and its 27 member states have in the works to come out of the pandemic total some US dollars 5.85 trillion. EU economy Commissioner Paolo Gentiloni told a European Parliament Committee said that if comparisons are made with U.S. President Biden pandemic stimulus relief package, the 27-nation EU can confidently stand next to to Washington when all efforts are counted together. (Johanna Geron, Pool via AP, File)

BRUSSELS -- The European Union's top economic official said Monday that the recovery measures the EU and its 27 member states have in the works to emerge from the pandemic total about $5.85 trillion.

Economy Commissioner Paolo Gentiloni told a European Parliament committee that if a comparison is made with President Joe Biden's pandemic relief package, the EU can confidently stand next to Washington when all efforts are counted together.

"Measures taken until now from member states and the EU reach so far" $5.85 trillion, the Italian commissioner told legislators, sweeping aside criticism that authorities weren't doing enough compared with Washington.

The EU has agreed to a common recovery fund package of $910 billion, plus a $1.3 trillion seven-year budget that will be strongly geared toward dealing with the recession caused by covid-19 that the bloc's 450 million citizens will have to overcome. Many of those measures still need a final stamp of legislative approval.

During his first 100 days in office, Biden has secured passage of a $1.9 trillion pandemic package to bring relief to 330 million Americans. There is also a proposed $2 trillion-plus infrastructure plan and the recently unveiled $1.8 trillion proposed student-families-workers plan, bringing the total to a potential $6 trillion.

"If we look at it in a certain way, we could say that the U.S. reaction was stronger, faster than the European one," Gentiloni said.

Take note, however, "that we are not a federal state. And so we have to consider both member states and the EU level."

"So we are not used to mixing all the different interventions. But if we do this, we reach an amount which is not so different from the effort of the United States," Gentiloni said.

Many major social affairs and economic policies are still run at a national level in the European Union, and stimulus measures for companies and the workforce also have a massive national input that is rarely visible in EU statistics.

Still, the $910 billion "Next Generation EU" package stands out because for the first time it allows the bloc to raise money on the markets by itself. Much of the aid will be spent among the poorer and harder-hit member states.

EU Vice President Valdis Dombrovskis said that if requests from member states proceeded as planned, the first disbursements could be made in July. He added that the second tranches of financing could come before the end of the year.

Meanwhile, British Prime Minister Boris Johnson confirmed Monday that he has given the go-ahead for much-missed human contact starting next Monday as part of the next round of lockdown easing following a sharp fall in new coronavirus infections.

Other easing measures include the reopening of pubs and restaurants as well as cinemas and hotels, and allowing two households to meet up inside a home.

However, Johnson stressed that people should exercise common sense given that social contact is the main way the virus is transmitted.

"This unlocking amounts to a very considerable step on the road back to normality, and I am confident we will be able to go further," he said at a briefing from Downing Street. "This doesn't mean that we can suddenly throw caution to the wind ... I urge you to think about the vulnerability of your loved ones, whether they have had a vaccine, one or two doses, and whether there has been time for that vaccine to take effect."

In the easing next week, Johnson said six people, or two households even if the total is higher, will be able to mix in homes as well as in pubs and restaurants. The limits on outdoor gatherings have been raised to 30 people. Indoor entertainment activities such as cinemas, soft play areas, adult group sports, exercise classes and hotels are also allowed to reopen Monday. And students won't have to wear face coverings in class.

Information for this article was contributed by Pan Pylas of The Associated Press.