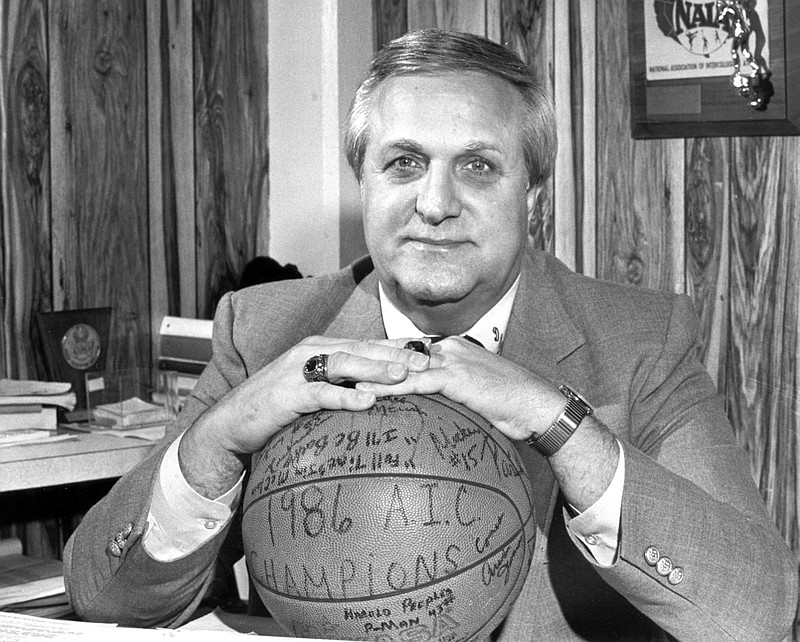 Coach Don Dyer is shown in this undated photo.

Grady Bean very much remembers picking up the phone in spring 1983. On the other line was Donald Wayne, a fellow Henderson State basketball alum and the then-head coach at Hamburg High School.

"'Do you remember a guy named Scottie Pippen?'" Bean recalled Wayne asking. "'He's not a great player, but he wants to go to college [and walk on]."

Bean and the Reddies couldn't take Pippen. They were out of roster spots.

University of Central Arkansas Coach Don Dyer, on the other hand, wasn't going to turn anyone down.

"He would have 100 guys trying out outside his scholarship players and he'd spend a week weeding through them every year," Bean said. "No other coach would do that."

That commitment to the game and "relentless" work on the recruiting trail is how the Arkansas basketball community will long remember Dyer, who died Wednesday at 87. An Arkansas Sports Hall of Fame and NAIA Hall of Fame inductee, Dyer, who was a successful high school coach where he won two girls state championships at England, amassed a 606-277 record as a collegiate head coach, making him the winningest at any level of the sport in Arkansas when he retired in 1993.

Although Dyer was perhaps most well-known for coaching Pippen at UCA, he also coached the Bears to back-to-back national championship games in 1991 and 1992. He also had a very successful run at Henderson State. where the Reddies made four trips to the NAIA national tournament, won eight Arkansas Intercollegiate Conference championships -- including seven consecutive from 1972-1978 -- and finished as national runners-up in 1976.

Following that run, he retired briefly, stepping away for one season. The Bears then offered a chance to get back in the coaching game and Dyer couldn't resist the itch.

And a return to the AIC meant frequent matchups against his alma mater, Henderson State, and his former player, Bean, who took over as head coach of the Reddies in 1983.

"I don't think I've ever seen a more intense competitor [as a coach] than Don Dyer was," Bean said. "To most of us that played for him, he was like that sixth-grade teacher that you have and you don't like them very much when you have them in class. And then 30 years later you say, 'Wow, they taught me a lot. I just didn't realize what was going on.'

"If you played for him there were no shortcuts at all. You didn't really appreciate him a lot when you were playing for him -- you were just trying to survive."

Where Dyer stood out from the pack was his willingness to recruit Black players during an era in which most of his peer schools did not.

Dyer took chances on guys he viewed as hard-working, regardless of race, but that he was unafraid to cut against the grain and bring in players that gave his teams the best chance possible to succeed is something that sticks with Ronnie Martin to this day.

"He recruited anybody that liked to play and wanted to win," said Martin, who was Pippen's roommate at UCA and was also recruited by Dyer from Hamburg. "He gave a lot of young Black men an opportunity to not only develop in sports but to develop as people."

As much as Dyer was a competitor, he developed deep relationships with many statewide through basketball.

Bean credits Dyer with helping him get the Henderson State job when the position opened. And as much as Bean knows Dyer did it because they were friends, he still jokes that Dyer wanted to be able to constantly pick his brain about the sport that brought them together in the first place.

Cliff Garrison, who spent just one season as an assistant under Dyer with the Reddies before becoming the head coach at Hendrix College for 31 years, often found himself on the wrong side of the Hendrix-Henderson State or Hendrix-UCA rivalry.

But with their two final schools just a few miles apart in Conway, Garrison and Dyer grew to be close friends once they retired.

"We had some great Razorback coaches during that time and some great AIC coaches, but I think Don was one of the top coaches in the history of the state in college basketball," Garrison said. "He was a professional. He really worked at [it] and it paid off for him."

It's the work that Bean always comes back to when he remembers Dyer.

"He was not a great Xs and Os coach -- that was not his forte," Bean said. "His forte was his work ethic. If you talked to anybody that knew the man, you were not going to outwork him. ... He lived it and breathed it 24/7.

"He just had no ego. He was a relentless pursuer of knowledge of the game, and for me, that's what I learned from him -- you can learn from anybody -- and he certainly showed me that."