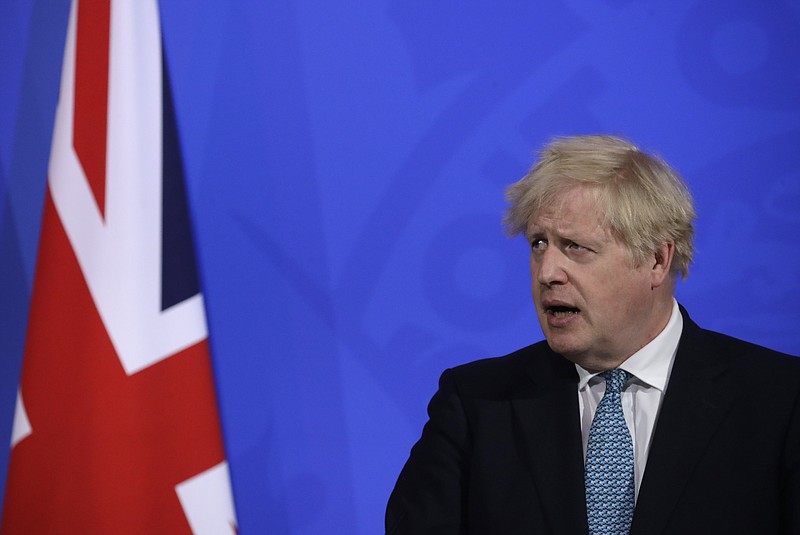 [Video not showing up above? Click here to watch » https://www.youtube.com/watch?v=9uUMtNk-uJM]

Cases of a variant first identified in India have more than doubled in a week, defying a sharp nationwide downward trend in infections won by months of restrictions and a rapid vaccination campaign. Government scientific advisers say this variant is likely more transmissible than even the U.K.'s dominant strain, though it's unclear by how much.

"If the virus is significantly more transmissible, we are likely to face some hard choices," Prime Minister Boris Johnson said Friday at a news conference. "I have to level with you that this could be a serious disruption to our progress."

He said the next stage of lockdown-easing measures would take place as planned on Monday, but warned the variant might delay plans to lift all restrictions, including social distancing and face-covering rules, on June 21.

Johnson said soldiers would help carry out "surge testing" in Bolton and Blackburn in northwest England, where pop-up vaccination sites were being set up to speed the inoculation drive. More than two-thirds of British adults have received a first dose of a coronavirus vaccine, and 37% have had both doses. The government is shortening the gap between doses for people over 50 from 12 to eight weeks in a bid to give them more protection.

The government's Scientific Group for Emergencies says the Indian-identified variant, formally known as B.1.617.2, could be up to 50% more transmissible than one first recorded in southeast England last year that is now the U.K.'s dominant strain. But they say there is a high level of uncertainty about the exact figure. Additionally, there is no evidence so far that the variant causes more severe disease or that existing vaccines won't work against it.

Britain has recorded almost 128,000 coronavirus deaths, the highest reported toll in Europe. But new infections have plummeted to an average of around 2,000 a day, compared with nearly 70,000 a day during the winter peak, and daily deaths have fallen to single digits.

Restrictions that have curbed travel, commerce and daily life for months are gradually being lifted. Starting Monday, restaurants and pubs in England can open indoors; museums, theaters, cinemas and hotels can reopen; and people can once again hug friends and family members they don't live with.

Scotland, Wales and Northern Ireland are following similar but slightly different paths. The Scottish government is keeping the city of Glasgow and the northern area of Moray under restrictions because of rising case numbers there.

Elsewhere in Europe, Poland's restaurants, bars and pubs reopened for the first time in seven months, and the government dropped a requirement for people to cover their faces outdoors.

The reopening, now limited to the outdoor consumption of food and drinks, officially took place on Saturday. Yet many could not wait for midnight to strike and were out on the streets of Warsaw and other cities hours earlier on Friday evening to celebrate, gathering outside popular watering holes.

"Now they are opening and I feel so awesome. You know, you feel like your freedom is back," said Gabriel Nikilovski, a 38-year-old from Sweden who was having beer at an outdoor table at the Pavilions, a courtyard filled with pubs in central Warsaw. "It's like you've been in prison, but you've been in prison at home."

The end of a requirement to wear masks outdoors added to the sense of liberation. Masks still will be required in settings like public transport and stores.

The easing of the country's lockdown is taking place in stages, but the reopening of bars with outdoor gardens or dining areas was clearly a key psychological step on the road back to normality. From May 29, indoor dining will again be allowed.

Yet many people don't feel like they can fully relax yet.

Aleksandra Konopka, who manages a bar along a busy promenade on the Vistula River where people were lounging in deck chairs and sipping drinks in the sandy garden with a beachlike vibe, said she was thrilled with the reopening. But she is nervous there could be more lockdowns as new virus variants circulate.

Other bar owners were happy, thanks to the prospect of being able to finally start earning money, and many said they had been bombarded with reservation requests leading up to the opening.

"Today we feel as if it was New Year's Eve because we are counting down to midnight," said Kasia Szczepanska, co-owner of a bar on Warsaw's trendy Nowy Swiat Street. "It's like New Year's in May."

As Poland began opening up, Taiwan announced limited gatherings and ordered entertainment businesses to close as it raised its coronavirus alert in the capital to the second-highest level to contain a new surge in locally transmitted cases.

Health Minister Chen Shih-chung said at a briefing Saturday that Taipei and the surrounding city, New Taipei City, accounting for a population of about 6.5 million, was now placed under coronavirus alert level three, one stage short of a full lockdown.

The measures, which will be in place for two weeks, limit indoor gatherings to five people and outdoor ones to 10 people. Residents, urged to avoid unnecessary travel and gatherings, must wear masks at all times when outside.

Nightclubs, bars, karaoke bars and other entertainment venues were ordered to shut while restaurants were required to register customers and implement social distancing. Businesses were encouraged to offer remote working and flexible hours. Schools would be closed to the public, but classes were not suspended.

The latest outbreak is a setback for Taiwan, which has for the past year been held up as a model for dealing with the outbreak. It's never had to impose lockdowns, with residents carrying on as usual in sharp contrast with much of the rest of the world. As of Saturday, Taiwan had reported 1,475 cases among its population of about 24 million, with 12 deaths.

On Friday, after increased local infections, more than 32,000 people were vaccinated, the highest daily figure since late March when Taiwan began offering AstraZeneca shots. Less than 1% of the population had been vaccinated as concerns were raised over possible blood clots associated with the vaccine. On Thursday, Taiwanese President Tsai Ing-wen said the first batch of locally made vaccines would be available at the end of July.

Meanwhile, a drastically truncated version of a Hindu chariot festival took place Saturday in Nepal's capital, where strict covid-19 restrictions in place. The festival went on after an agreement was struck between organizers and authorities that prevented a repeat of last year's violent confrontations between police and protesters.

Typically, a five-story-high wooden chariot of the deity Rato Machindranath -- whose statue is made from clay and covered in red paint with wide-open eyes -- is pulled by devotees around a suburb of the capital, Kathmandu. The annual festival lasts about a month and draws tens of thousands of people.

But this year, only around 100 hand-picked devotees were allowed to pull the chariot for just a few yards, as riot police sealed off the neighborhood to prevent any spectators from entering.

The Himalayan nation is experiencing a coronavirus surge, with record numbers of new infections and deaths. Authorities imposed a lockdown across most of the country last month, and extended it in recent days by another two weeks.

The agreement to drastically scale back the festival was made after consultations among politicians, officials, security forces, priests and organizers. Many devotees stayed home and celebrated with feasts and rituals with their families.

Last spring, the statue was built but remained parked because of virus restrictions until September, when thousands of protesters defied a lockdown to take part in the festival. Several people were injured as police in riot gear blocked protesters as they moved the chariot, dousing them with water cannons and firing tear gar. The protesters threw stones at the police.

The festival is held in the belief that it will to please gods so they can provide for a generous rainfall, a good harvest and prosperity. It's thought to have been held for more than 1,350 years.

Nepal, with a population of around 30 million, has reported 447,704 confirmed coronavirus cases and 4,856 deaths.

Out of fears of importing infections from Nepal, China on Friday canceled attempts to climb Mount Everest from its side of the world's highest peak.

The closure was confirmed in a notice Friday from China's sports administration, the official Xinhua News Agency said.

China had issued permits to 38 people, all Chinese citizens, to climb the 29,032-foot-high mountain this spring. Nepal has given permission to 408 people. Climbing was not allowed from either side last year because of the pandemic.

In Nepal, several climbers reportedly have tested positive for the virus after they were sent down from the Everest base camp.

China said earlier that it would set up a separation line at the peak and prohibit people on its side from interacting with anyone on the Nepalese side. It was unclear how that would be done.

Information for this article was contributed by Jill Lawless, Vanessa Gera, Rafal Niedzielski, Binaj Gurubacharya and staff members of The Associated Press; and by Lily Kuo, Alicia Chen and Wu Pei Lin of The Washington Post. 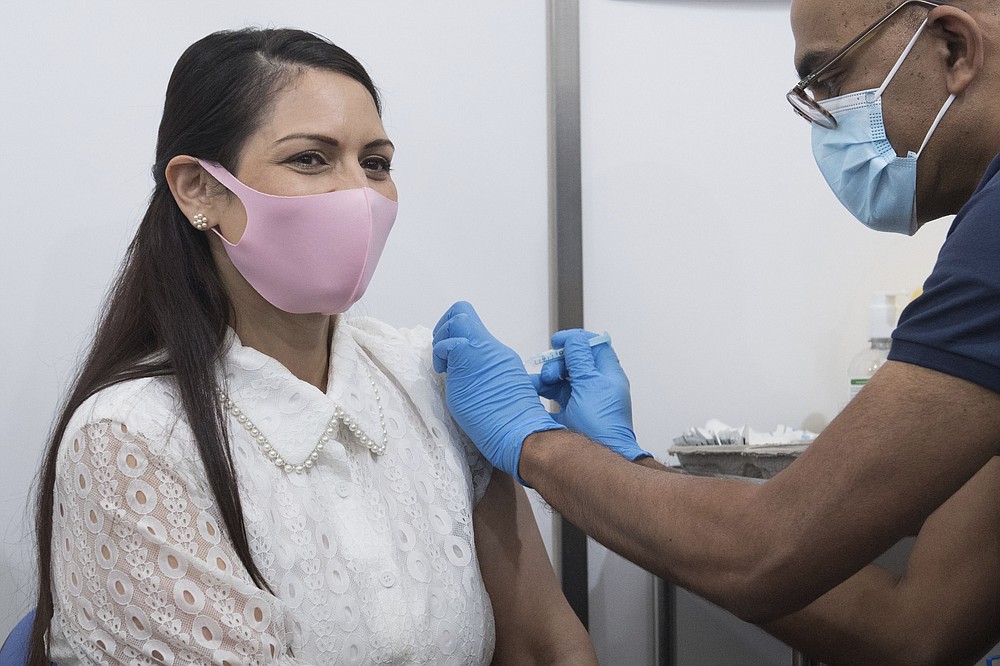 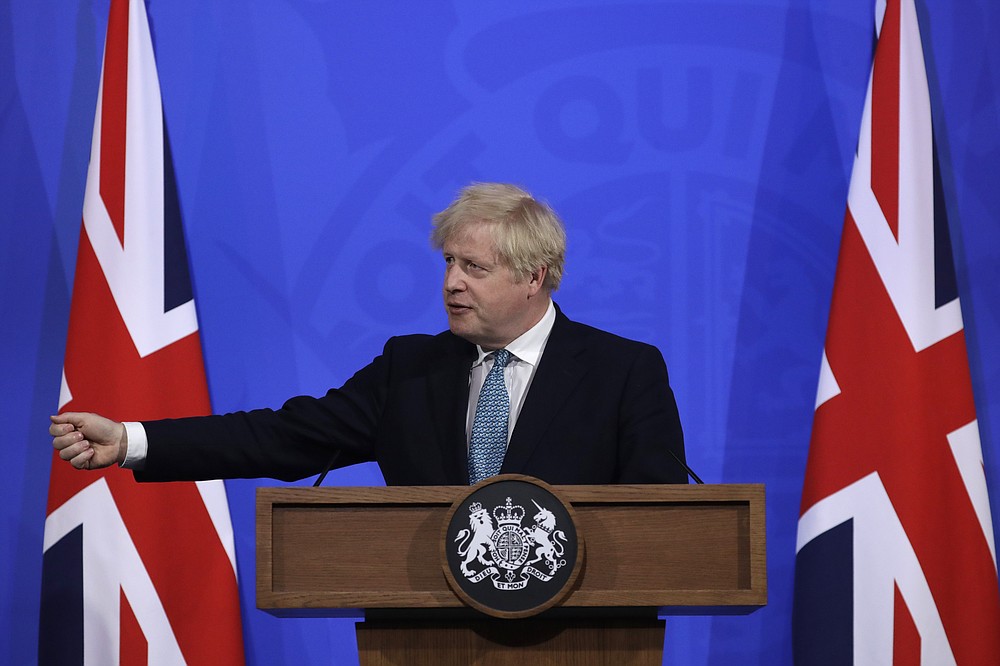 Britain's Prime Minister Boris Johnson gestures as he answers a question from the media at a press conference about the ongoing coronavirus outbreak, in London, Friday, May 14, 2021. (AP Photo/Matt Dunham, Pool) 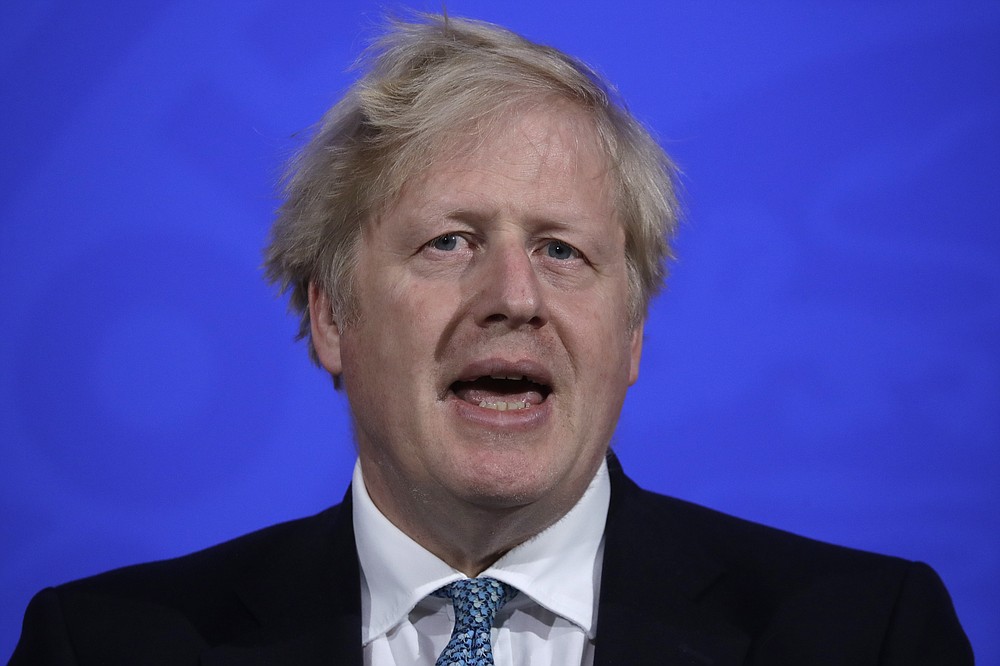 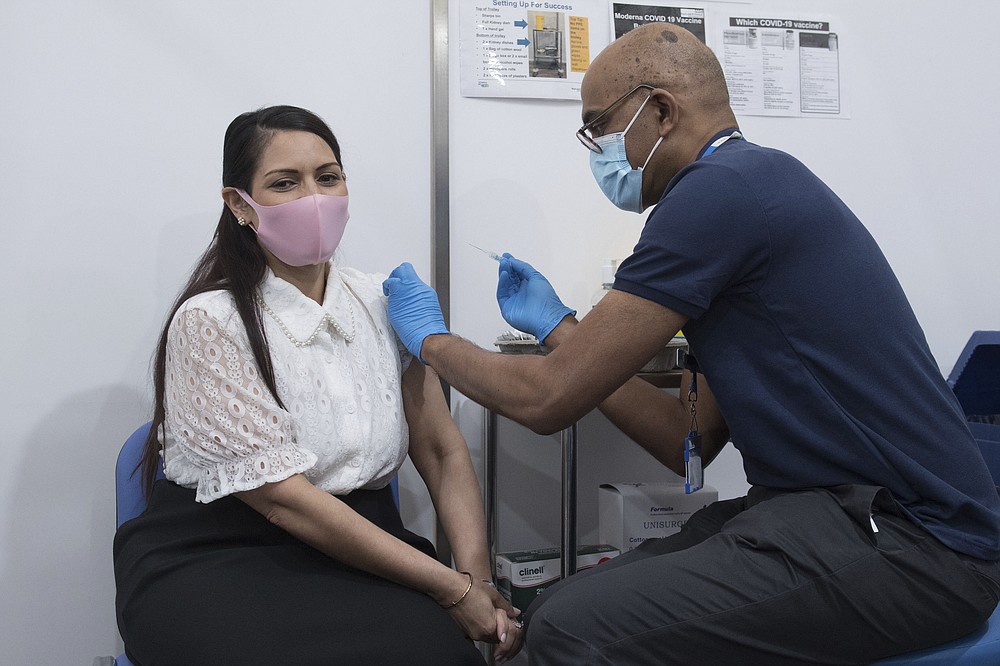