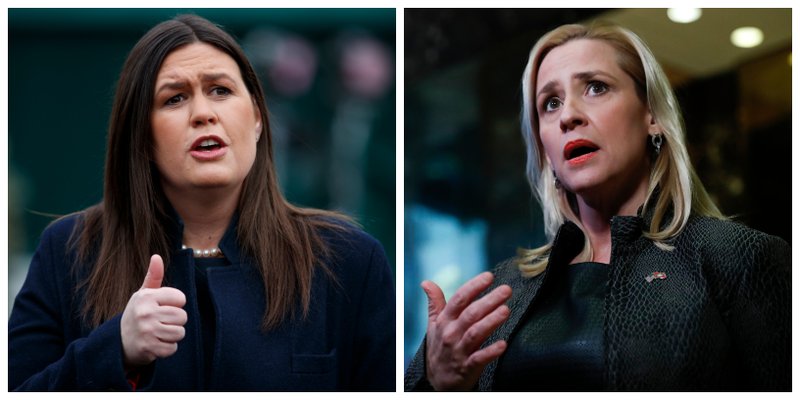 Rutledge, of Maumelle, announced Monday that she signed the "Taxpayer Protection Pledge" by nonprofit group Americans for Tax Reform to demonstrate that she "will work toward strong, common-sense proposals such as eliminating the state income tax to bring economic prosperity to Arkansas."

In signing the pledge, Rutledge, the current attorney general, pledged that she " will oppose and veto any and all efforts to increase taxes."

"I stand firm that this is a contract with Arkansas voters demonstrating my commitment to not only stop any future tax increases, but also eliminate the state income tax altogether," she said in a news release.

Three days earlier, Sanders tweeted her support for eventually getting rid of the state's income tax.

"At a time DC democrats are raising taxes and paying workers to stay home, we need to begin phasing out the state income tax. When I'm governor I will lead the effort to reward work, not penalize it," Sanders said Friday on Twitter.

In November, Republican Lt. Gov. Tim Griffin, who was a candidate at the time for governor, called for phasing out the state's income tax. In February, he decided to run for attorney general instead.

Griffin said in November it could take a decade or more to eliminate the tax.

At that time, state Sen. Jim Hendren, an independent from Sulphur Springs who is considering a possible run for governor, said it could take more than three decades to phase out the state income tax.

"Using the rates of tax relief that we have used the last 7 years it would take over 35 years to phase out all Arkansas income tax completely unless there would be tax increases elsewhere or dramatic cuts to the state budget," Hendren said in November. Hendren served as a co-chairman of the Legislature's tax overhaul task force in 2017 and 2018.

Hendren is Republican Gov. Asa Hutchinson's nephew. Hutchinson, who is term limited, has said he plans to call a special session this fall for the Legislature to consider further cutting state income taxes.

Rutledge's announcement Monday coincided with the income tax filing and payment deadline for Arkansans for both federal and state income taxes.

"Over the last 6 years, Arkansas has taken significant steps to reduce the tax burden including cutting the top marginal income tax rate from 6.9 to 5.9 percent in 2019," Rutledge said in her news release.

In a telephone interview, she said she hopes to eliminate the tax during her time as governor, "whether it takes four years or eight years."

She said she would release a plan to do so in the summer.

"Without fail, so many people talk about the tax burden that Arkansans carry on their backs," Rutledge said. "We can't simply do it overnight, but we can't wait till 10 or 15 years down the road."

To offset the reduction in revenue, she said she would look for ways to make state government more efficient by eliminating duplicate services or positions.

Sanders' campaign manager, Chris Caldwell, said in a written statement that Sanders, of Little Rock, is looking into different ways to end the state income tax.

"We believe there are multiple paths to accomplishing the reduction and phasing out of the state income tax, and we are taking a close look at a number of options," he said in a text message to the Arkansas Democrat-Gazette.

"Ultimately, Sarah knows one of the most important solutions to growing our economy and remaining competitive with no income tax states around us like Texas and Tennessee is to reduce the tax burden on Arkansans," Caldwell said.

"As governor, Sarah is eager to put us on a path to phasing out the state income tax and making Arkansas the number one state to live, work, do business and raise a family."

Garner presented the bill to the Senate Revenue and Taxation Committee, but he didn't ask the committee to vote on it. He plans to pursue an interim study of the proposal.

SB522 would have led to a $3 billion reduction in revenue in fiscal 2023, based on net tax amounts reported on 2019 returns, according to a financial impact statement from the state Department of Finance and Administration.

Businesswoman Supha Xayprasith-Mays of Little Rock said Monday that she would phase out the state individual income taxes only for Arkansans making under $500,000 annually.

"I'm proposing that because we are a poor state and people that generate that kind of revenue and money can afford to pay the state income tax to help the state meet its financial obligations," Xayprasith-Mays said in a text message to the Arkansas Democrat-Gazette.

Small business owner James "Rus" Russell of Little Rock said Rutledge and Sanders' proposals would have a negative outcome for the state, and that he would like to see more corporate tax accountability.

"I don't think we need to phase out the income tax because that has been disastrous in states like Kansas, where it's destroyed their economy, so I don't agree with them on phasing out personal income tax," Russell said in a telephone interview.

"I just think that we need to bring corporate taxes back in line with the modern era and revise our tax code in general."