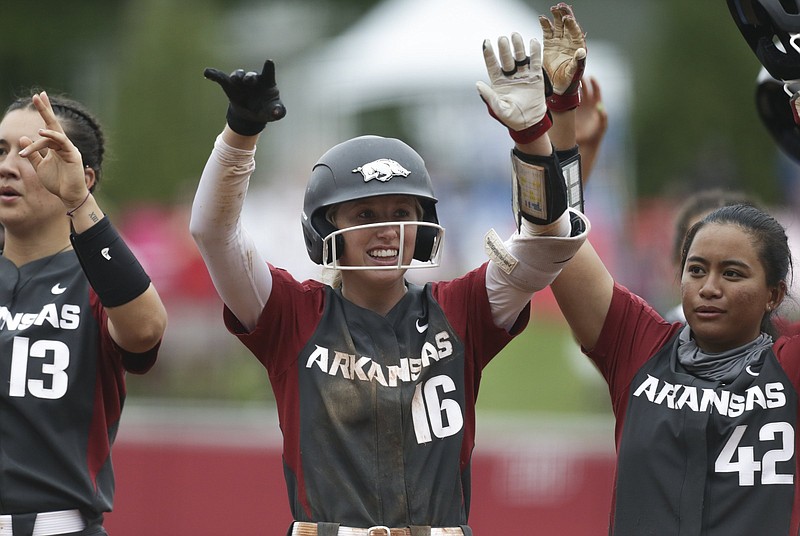 FAYETTEVILLE -- The University of Arkansas softball team endured a two-plus hour rain delay to start its opening game in the NCAA Tournament, but it didn't hamper the Razorbacks in making short work of Manhattan at Bogle Park on Friday afternoon.

Ryan Jackson's two-run double highlighted a five-run fifth inning and put an exclamation mark on the Razorbacks' 8-0 run-rule win over the Jaspers in the Fayetteville Regional.

The Razorbacks (41-9) will take on South Dakota State, a 7-1 winner over Stanford, in the winner's bracket at 1 this afternoon in the double-elimination event. Stanford will face Manhattan in an elimination game at 3:30 p.m.

The opening game of the Fayetteville Regional was originally scheduled to start at noon, but it was pushed back multiple times because of rain until the first pitch was finally delivered at 2:05 p.m. Arkansas Coach Courtney Deifel liked the way her team handled the situation.

"I felt like we got better as the game went [on]. I thought we had a little slow start, and I don't think we had our best stuff early. And I think we just stayed the course and took what they gave us, got some big hits when we needed them."

Arkansas took advantage of Manhattan's struggles in the circle in the fifth inning. The Razorbacks used three hits, three walks and a hit batsman to put the game away.

Aly Manzo and Linnie Malkin drew bases-loaded walks, and another run scored on a wild pitch. Jackson's double down the left-field line scored two and ended the game via the run rule.

Malkin -- who went 2 for 2 with a double, 2 RBI and a run scored -- said the team has demonstrated good patience all season and it showed in that inning.

"We draw a lot of walks on this team," Malkin said. "Just keeping our composure in the box and not swinging at anything we don't want to swing at and playing as a team. It was fun."

Arkansas draws plenty of attention for its power, ranking among the national leaders in home runs all season. But the Razorbacks are fifth in the nation with 198 walks drawn heading into the NCAA Tournament.

That was more than enough to back Mary Haff. The junior tossed a two-hitter and improved to 24-6 on the season. She allowed only 2 singles, struck out 5 and walked 1 in 5 scoreless innings. The Jaspers (22-15) got just one runner as far as second base against the SEC co-pitcher of the year.

"First three innings were pretty good," Pardalis said. "It was very interesting getting used to the atmosphere, which was nice. The big inning when we started walking people, it got away from us then."

Manzo's two-out single past the shortstop scored Malkin from second base with the first run of the game in the bottom of the second. The Razorbacks added two more on a sacrifice fly by Hannah Gammill and an RBI single by Malkin.

Summit League player of the year Cylie Halvorson hit two home runs and drove in five runs to help the Jackrabbits take down the Cardinal.

Halvorson's two-run shot in the third inning gave South Dakota State (43-6) a 2-0 lead. She added a three-run blast in the seventh to set the final score. Teammate Jocelyn Carrillo added a two-run home run as well.

Grace Glanzer picked up the win in the circle allowing a run on just three hits. She struck out one and walked one in the complete-game effort. 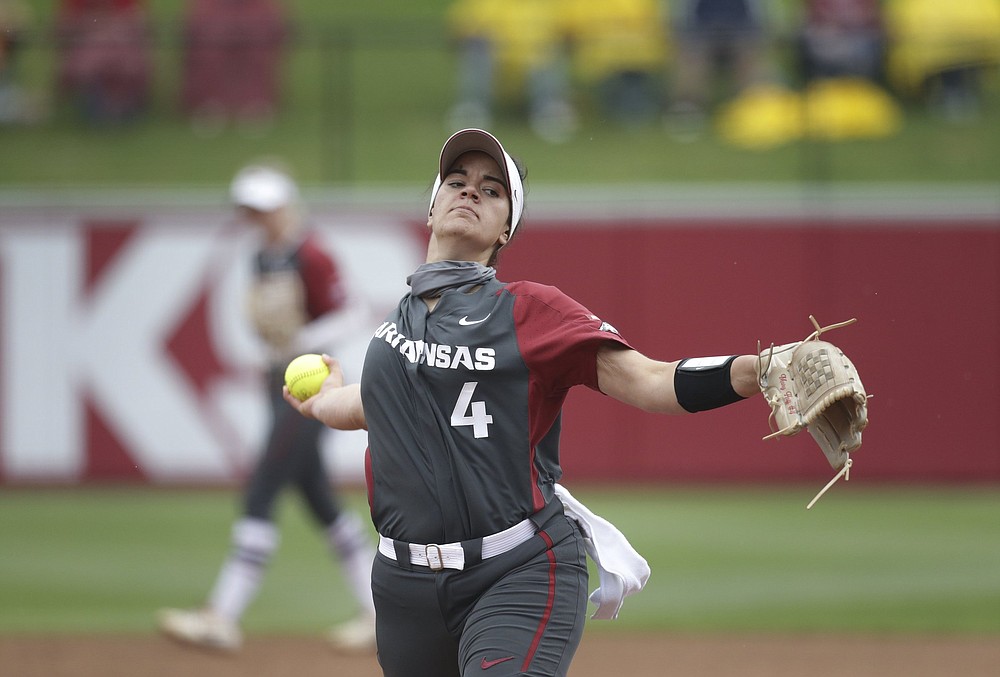 Mary Haff allowed 2 hits, struck out 5 and walked 1 in a complete-game performance in the Razorbacks’ 8-0 victory over Manhattan on Friday in the NCAA Tournament Fayetteville Regional at Bogle Park. Arkansas will take on South Dakota State in a winner’s bracket game at 1 p.m. today. More photos at arkansasonline.com/522mcua/ (NWA Democrat-Gazette/Charlie Kaijo)
ADVERTISEMENT