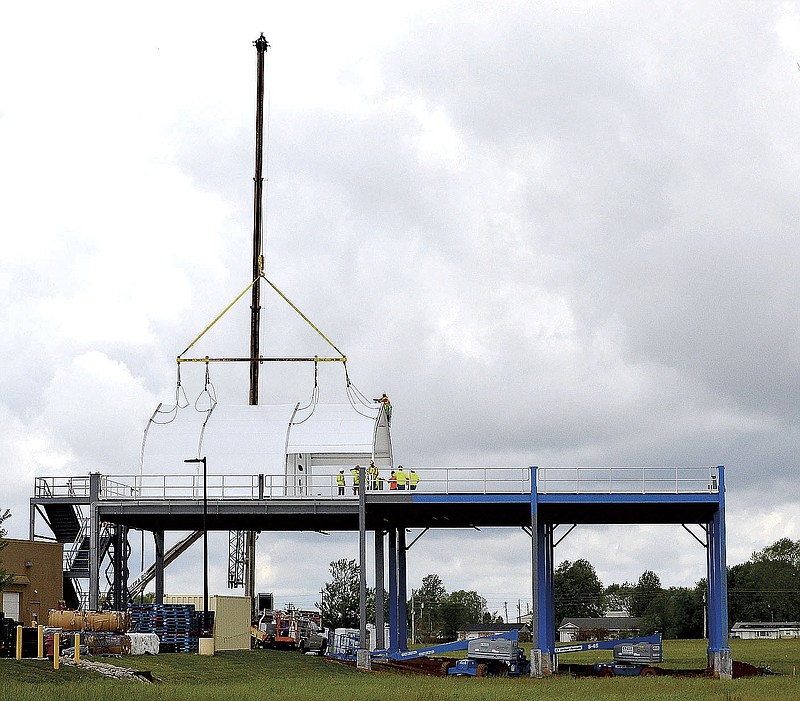 Work progresses on the platform for the drone service on the northwest corner of the Walmart Neighborhood Market on Slack Street, Pea Ridge.

PEA RIDGE -- Construction is well underway on the drone launchpad here at the Walmart Neighborhood Market, which will use the same method to deliver consumer goods to customers' homes that has worked for years in delivering lifesaving supplies in Africa.

"The drone wars have begun and as is the case with most retail innovations, Walmart is determined to lead the pack," said Carol Spieckerman, a retail consultant and president of Spieckerman Retail in Bentonville. "Next-level drone capabilities are already being hatched by retailers like Kroger, which announced that its drone deliveries will reach mobile phone locations, not just street addresses. No doubt Walmart is already testing new options as well."

"Keeping these betas running close to home allows Walmart to monitor and quickly adjust strategy. The wide open spaces in Pea Ridge offer a compelling testing ground for drone deliveries without venturing too far away from home office."

Walmart's headquarter is in Bentonville, 11 miles by road from Pea Ridge.

Benoit Miquel, project manager for Zipline, the company partnering with Walmart, explained the project to the city's planning commission in January. The elevated pad with two buildings sits on the northwest corner of the store's property on Slack Street.

The platform is 25 feet high because it is a prototype for the pads to be at supercenters, which have 25-foot-high roof lines. The roof line at the Pea Ridge store is 20 feet high.

The drone delivery service is expected to launch to select customers later this year, Walmart spokeswoman Camille Dunn said in a Thursday statement. The pilot program will initially focus on delivering over-the-counter health and wellness items, with the potential to expand to other categories, she said.

Over the long term, drones are one possible way to reduce line-item expenses like fuel and labor while providing a convenience customers will demand, said Senior Vice President Keith Anderson of Profitero, a financial analysis firm.

"The idea is that a customer places an order on an app," Miquel said. "The customer is kept aware of the location of the package and notified when it's about to be delivered."

The drones can deliver about four pounds in product anywhere within a 50-mile radius. Zipline drones do not land to make deliveries but drop them by paper parachute attached to sturdy cardboard containers.

This procedure allows packages to drop with great precision, thanks to GPS guidance, without having to teach customers or anyone else how to remove the package from the drone, according to the company.

The drone flies well above houses and traffic, dropping to a low altitude only near the point of delivery. The drone has a 10-feet wing span and no cameras.

Zipline began using its system to deliver life-saving medical supplies in the African nation of Rwanda in 2016. Zipline drones now serve more than 2,600 medical facilities on that continent, delivering everything from prescription medicines to chilled packets of blood for life-saving transfusions, according to news accounts.

"People think what we do is solving a developing economy's problem. But critical-access hospitals are closing at an alarming rate in the U.S., too, especially if you live in the rural U.S.," Zipline co-founder and chief executive Keller Rinaudo said in a 2019 interview with CNBC.

In Pea Ridge, "there will be two support buildings," Miquel told city planners. "Each building is made of two portable units -- providing conditioned air space for operators and the other for maintenance and ground station.