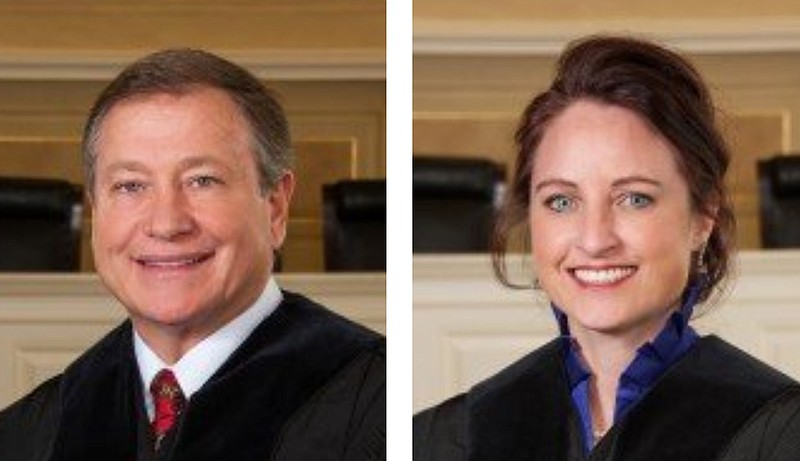 Wynne announced his bid for a second eight-year term on the Supreme Court in a news release issued Wednesday morning.

Wood confirmed Wednesday afternoon that she plans to seek re-election to a second eight-year term. She said she will make a formal announcement soon.

Wynne has served as an associate justice in Position 2 on the Supreme Court since 2015. In the 2014 election, Wynne defeated attorney Tim Cullen of Maumelle by a 52% to 48% margin.

Chris Carnahan, a district judge in Faulkner and Van Buren counties, said Wednesday he is considering challenging Wynne for the post. He said he expects to make a decision within the next few weeks. Carnahan was the Republican Party's executive director from 1999-2001.

Wood has served as an associate justice in Position 7 on the Supreme Court since 2015. She was elected in 2014 without an opponent.

State Supreme Court positions have staggered terms, so not all seven justices are up for re-election in the same year.

A third associate justice post will be on the ballot in next year's election. Position 6 is held by Justice Karen Baker, who has served since 2011. Baker could not be reached Wednesday for comment by telephone about her plans. Baker filled a vacancy on the high court in a special election in 2010 and won re-election in 2014.

The filing period for candidates for state and federal offices in Arkansas is Feb. 22-March 1, 2022, with the primary election May 24, according to the secretary of state's office.

The four other members of the Arkansas Supreme Court are Chief Justice Dan Kemp and Justices Shawn A. Womack, Courtney Rae Hudson, and Barbara Webb.

Wynne said he has enjoyed serving on the Supreme Court and he believes his 20 years of experience as a judge, combined with his time in private practice in Fordyce, allow him to bring a unique perspective to his service on the state Supreme Court.

"I feel it is important for Judges to be elected and I look forward to having the opportunity to visit with the people of Arkansas about my commitment to them and the judicial system," he said in a news release announcing his re-election bid.

Asked whether he expected independent groups to be involved in the election next year for his Supreme Court post, he said, "I have no control over anything but my campaign."

Prior to Wynne's election in May 2014, the race received national attention when the Law Enforcement Alliance of America, an organization based in Lake Ridge, Va., began buying airtime for commercials targeting Cullen.

The ads, which Cullen's campaign estimated to cost about $400,000, criticized Cullen for his courtroom defense of a sex offender. At that time, Cullen said the ad was a lie and he called on Wynne to repudiate the claims the group made. Wynne did not speak out against the ads, stating that he was not involved with them.

After that election, Cullen said the group helped Wynne outspend him. Wynne said he had no comment on the effect of the ads on the election.

He also served as a Fordyce School Board member; Fordyce city attorney; chief deputy prosecuting attorney in Dallas, Calhoun and Cleveland counties; and a Democratic state representative from 1984-88. He has been an adjunct professor at the University of Arkansas at Little Rock William H. Bowen School of Law since 2012.

Wood served on the state Court of Appeals from 2013-14 and as a circuit judge in the 20th Judicial District from 2007-12. She previously was an attorney at the Wood Law Firm and Williams & Anderson PLC.