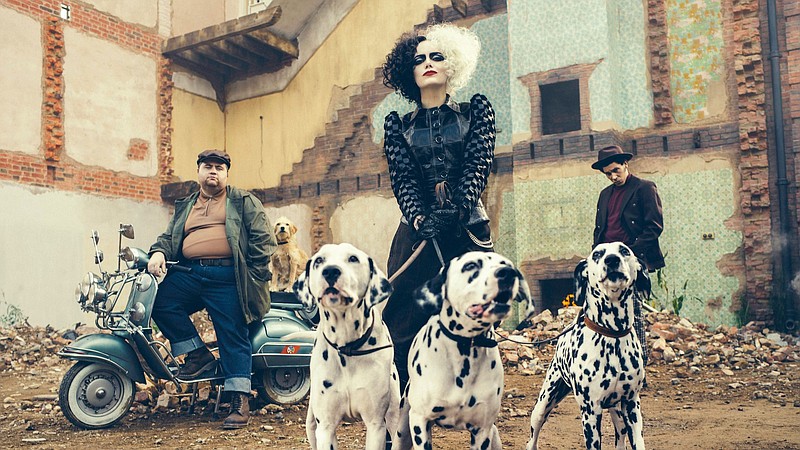 Sympathetic baddies Horace (Paul Walter Hauser), Cruella (Emma Stone) and Jasper (Joel Fry) alongside the real stars of “Cruella,” the dalmations that may or may not be digitally composed.

Skeptical. That's how I was going into "Cruella." I had little faith in a movie trying to humanize a woman who attempted to skin puppies and make a coat. And yet ...

There are some things Disney and I are never going to see eye to eye on. Their obvious cash grabs remaking animated classics into soulless live-action copies is abysmal. The remakes of "Dumbo" and "The Lion King" have proved that.

But the "Maleficent" movies are a guilty pleasure, and "The Jungle Book" was actually solid. And "Cruella" surprisingly works (most of the time).

The film opens with our protagonist (definitely can't call her a hero) named Estella as a young mischievous girl. Estella's mother tells her to lie low, and she does for about five seconds, just long enough for a bully to anger her and for her to punch him in the face.

The opening few minutes do a lot to inspire confidence. It's full of hilarious moments. Estella keeps getting dragged before the headmaster, and he stamps her record book to keep track of how "bad" she's behaving. And each time you see the book, it's practically covered in black ink from stamps. It's a good bit.

What comes next, however, is such a lame death that I had to pause the video and ask myself, "Did that really happen?" It seems so ridiculously absurd that I just couldn't get over it.

Still, "Cruella" doesn't dwell on it for long, giving young Estella a pretty good transition scene into her modern-day self. For the rest of the movie, Emma Stone plays Estella, and the Arizona native gives a surprisingly serviceable English accent. Don't expect her to be cast on "The Crown" anytime soon, but for "Cruella," she's fine.

Cruella teams up with two thieves she met as a child, and they have a great deal of chemistry together in their team. One thief is Jasper (Joel Fry), and the other is Horace (Paul Walter Hauser). And if you're thinking those names sound familiar, they should. These are the same henchmen evil Cruella has in the animated film, "One Hundred and One Dalmatians," which this movie sort of serves as a prequel to.

Having a trio of thieves added more of a heist element to "Cruella," and it's certainly not unwelcome. The rest of the movie is about Estella following her dream of being a fashion designer, and she comes to work for one of the biggest names in London fashion, the Baroness.

I had questions about Emma Stone playing the role of Cruella, not because she's incapable, but because it's a fairly bombastic role for someone who typically plays smart snarky characters like Gwen Stacy in "The Amazing Spider-Man" or Olive Penderghast in "Easy A."

But I had no questions about Emma Thompson playing the Baroness, a narcissistic and eclectic fashion mogul. She was perfect for that part in every way.

Perhaps the best parts of "Cruella" are just watching Stone pulling all these insane stunts to upstage the Baroness. She's edgy and fierce, and naturally, the gossip rags eat it all up.

Another thing I really appreciated about this film was how it took the time to build Estella up into Cruella. Our protagonist really gives it the old college try, taking a menial job cleaning toilets in a big clothing store, just trying to get into the alterations department. But her honest efforts to break into fashion are rebuffed until she finally lets a little bit of Cruella loose.

I enjoyed the soundtrack for exactly half of the movie. Disney really shelled out to get some good tracks in here like "Time of the Season," and "These Boots Are Made for Walkin'." But toward the end of the movie, there's just so many hit songs crammed into "Cruella" that I found myself thinking, "Enough already!" It's overkill.

Then there's Artie, played by John McCrea. He plays a flamboyant and fashion-conscious owner of a boutique. Some headlines have even hailed him as "the first openly gay character in a live-action Disney film."

I like Artie, but he's criminally underutilized. And Disney pulled this "debut of a gay character" spiel before. Remember 2017's "Beauty and the Beast" facing boycotts because LeFou was supposed to be openly gay?

Artie's sexuality doesn't seem to be explicitly declared in the movie beyond some broad stereotypes. It's not like we see him with another man or discussing what his life is like as a gay man in '70s London. So what do these headlines amount to the week before Pride Month? Not much. Until Disney really commits to supporting a central LGBTQ character, it really shouldn't get any kudos from allies in the all-consuming culture war.

I did find myself wondering about the film's pacing in the second half. I appreciated the buildup to Estella becoming Cruella, but I paused the movie about 75 minutes in, expecting to find the film approaching its climax. Imagine my surprise when I discovered "Cruella" is actually two hours and 14 minutes long.

"Cruella" is fun, but by no means does the story need to be more than two hours long. The movie needs a little trim.

The film also earned a forehead slap from me by revealing how Cruella got her last name. It went over about as well as Han Solo getting his surname in "Solo: A Star Wars Story."

This being a prequel (of sorts) to "One Hundred and One Dalmatians," you might expect some tie-ins to the animated classic. There are. The Baroness owns three Dalmatians, and, to our amusement, they're quite ruthless and bloodthirsty animals. They look fine. I had trouble distinguishing when they were animated and when they were real dogs. And "Cruella" does a good job of making me like them by the end.

But the real dog stars of the movie are Estella's mutt "Buddy" and Horace's one-eyed chihuahua, "Blinky" (complete with leather eyepatch). Disney did what it does best and made these animals cute, resourceful, and hilarious, especially Blinky. Like the dalmatians, I couldn't tell when these animals were CGI, and when they were real. The studio does well in that department.

Discussing the dogs brings me to the most confusing part of the movie, and that's Cruella's behavior. Betty Lou Gerson's Cruella De Vil from the cartoon wouldn't have hesitated to kill someone (or maybe more accurately to have someone killed). And that's the Cruella I grew up with.

That's not the character Stone gives us. She dons a dalmatian-patterned coat at one point, and Artie straight up asks if she killed the Baroness' dogs to make it. To which, she responds "of course not." Stone is mean during parts of "Cruella" (frustratingly so when it comes to Horace and Jasper, whom I adored), but puppy murder is a line she refuses to cross, directly conflicting with her development into the villain of the animated movie.

That should affect your expectations going into "Cruella." Disney is trying to humanize the character and give us a relatable origin story.

The final showdown between Cruella and the Baroness is predictable, and it includes a silly twist. But "Cruella" has a lot to offer.

Stone offers a boisterous performance, and the rest of the cast including Kirby Howell-Baptiste and Mark Strong bring their A game. I especially loved Paul Walter Hauser as Horace, easily my favorite character. Horace isn't the brightest, but he's funny and wholesome.

I know nothing about fashion, but I appreciated all the outfits and themes Cruella put together. They always look cool.

Stay after the credits. There's a really cute tie-in to "One Hundred and One Dalmatians," I didn't see the film setting up.

"Cruella" is equal parts "Harley Quinn" and "The Devil Wears Prada." It's vibrant and carries an attractive energy for most of the film. A few things keep it from being perfect, but overall it's a good prequel. (And that's not something you can say about too many prequels.)