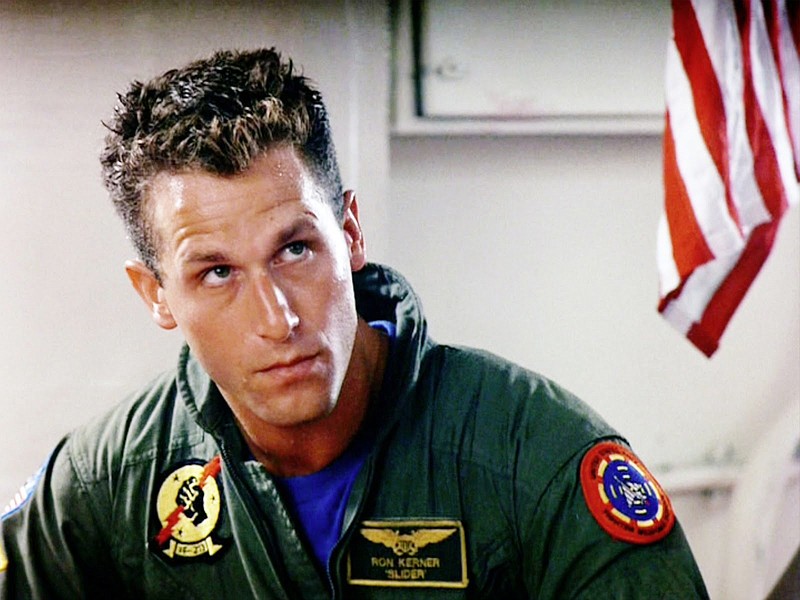 Actor Rick Rossovich stars as “Slider” in 1986’s “Top Gun.” Rossovich, who claims he had “no volleyball skills” before playing in the film’s iconic scene, is rumored to have a part in the film’s sequel which will be released this November.

Because his wife, Eva, originally hails from Sweden, it's tempting to think actor Rick Rossovich views his annual summer flights to Scandinavia as routine. Being a passenger, however, makes him strangely anxious.

"I'll be honest with you. I think I would feel probably safer flying with the Navy," he says from Europe. "That was [a] kind of world all unto itself. I did the training to get certified to fly in the back seat of an F-14 (Tomcat fighter)."

Rossovich has had memorable roles in "The Terminator" and "Roxanne" (where he delightfully plays Daryl Hannah's bumbling would be lover who needs help from a long-nosed Steve Martin), but his his best-known performance is in the 1986 hit "Top Gun."

Slider and Iceman resent the film's hero LT Pete "Maverick" Mitchell (Tom Cruise) because he lives up to his call sign. At the beginning of the movie Maverick faces off against a Soviet MIG pilot by flying so close to the Russian's canopy so that the enemy flier can see the naval aviator's middle finger.

While Slider supports the unflappable Iceman, one of the more memorable scenes in the film features him doing something the ultra-chill pilot would never do. When Maverick recommends a fighting strategy his instructor (Kelly McGillis) disapproves of, Slider tells the impulsive but clever pilot, "Gutsy move."

"I was lucky to have that little crack in the armor, unlike Iceman," Rossovich admits. "Being a radar intercept officer or a navigator, you're always a lower rung on the ladder. You've got to respect the guy in front of you, even if he's not in your cockpit."

From hearing this detail, it's obvious that Rossovich and the other performers took the task of playing navy pilots seriously. My uncle John Craig is a retired Air Force colonel, and while he laughed at the improbably greeting Tom Cruise gives a MIG pilot, he said that much of the rest of the film is quite good. He has even been to some of the dives in Miramar, Calif., featured in the film, like the bar where Anthony Edwards, as Maverick's Radar Intercept Officer "Goose," sings Jerry Lee Lewis' "Great Balls of Fire."

"It was a great location," recalls Rossovich, 63. "They had a fire. They had a lot of memorabilia there. Some things survived like the piano. There's the house in Oceanside where Kelly McGillis lives."

As the extras on the Blu-Ray indicate, Top Gun classes, which were developed to train fighter pilots after the Vietnam War, are rigorous. So was the process of replicating them on screen.

"Getting into the flight suits, doing the training to pass the certification, I had to be in a pool in full gear, treading water for -- I dunno -- I think it was 45 minutes. That's kind of a tough thing when you have a flight suit on with boots and a helmet, gloves and the whole deal," he says.

"We were all young guys who wanted to be tuned up and in our best physical presence. That's what you do on a movie set. You party at night, and during the day before you do that, you find a quick workout somewhere. It was the same with another movie I did called 'Navy Seals,' which was even more intense. The physical preparation was part of the character development. The volleyball scene was like that, too. Don't let me kid you."

In a break from the classroom scenes and mock combat exercises, Rossovich and the other cast members play a beach volleyball game shirtless. It's been a gift to comedians ever since. As the opening notes of Kenny Loggins song drone in the background, RiffTrax commentator Bill Corbett muses, "Nothing says macho like Kenny Loggins singing falsetto."

In the 1994 movie "Sleep with Me," moonlighting director Quentin Tarantino convincingly argues that "Top Gun" is actually a gay metaphor and that Maverick and Iceman eventually form an "elite gay fighting force."

Yes, Rossovich has seen Tarantino's analysis, which is readily available on YouTube, and says, "I love his riff on that, his monologue. He's funny.

"You've got to think about how the film was made. I'll give you an example. With the love scene (between Curise and McGillis). That was an afterthought. In the first cut, there wasn't a love scene, and the test audience said, 'Where's the love scene?'"

The final film features both a romantic sequence and the song "Take My Breath Away" by Berlin, which topped the charts and won an Oscar for Best Original Song.

It's no secret that Rossovich is proud of having been part of "Top Gun," and is still eager to share his experiences.

"They treated us so good. The Navy was so welcoming, open arms, good people. It made me so proud of being an American. They were so close, and I'd never served in the armed forces."