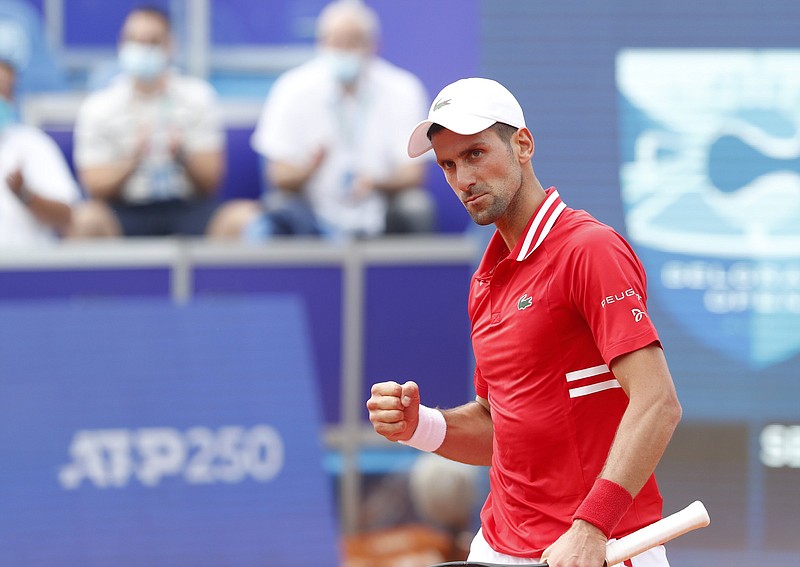 Novak Djokovic is the top seed in this year’s French Open, which begins Sunday in Paris. Djokovic’s only French Open championship came in 2016 when he defeated Andy Murray. (AP/Darko Vojinovic)

Forgive Novak Djokovic if he's just a little bit tired of hearing about, and being asked to address, how much longer he, Rafael Nadal and Roger Federer can stay at the top of tennis.

Or, put another way, whether a younger generation of men finally is poised to consistently win Grand Slam titles.

"I mean, I said it a thousand times. I don't know how many times people want me to repeat it," Djokovic said. "Of course [the next generation] is there, is coming, whatever. But here we are, still winning the biggest tournaments and Slams. I don't know what to tell you other than that."

"People like to talk about it. Fine. The guys are there. They are already establishing themselves in the top five, top 10 of the world. Nothing new. But we are still there."

When the French Open begins in Paris on Sunday, it will feel in some ways like order restored after the 2020 edition was altered in two significant ways because of the coronavirus pandemic: Only 1,000 spectators were let into Roland Garros per day, and competition started in September instead of May. Back in its rightful spot on the calendar and with about 5,300 fans allowed in each of the first 10 days, then 10,000 or more each of the last five days, could the clay-court championship serve as the setting for a symbolic changing of the guard?

Or, to Djokovic's point, will the elders remain in charge?

"A lot of people underestimate the time and the era we are playing in, with by far the three best players in the history of the game," said Dominic Thiem, whose U.S. Open title in September makes him the only first-time major men's champion since 2014. "It's more than clear that it's incredibly tough to win Grand Slam tournaments, having to beat, most of the times, two of them."

A glimpse at the dominance from the three tennis legends:

• Fifteen of the past 16 Grand Slam tournaments were won by them.

That can't happen at Roland Garros because they are in the same half of the bracket for the first time at a Grand Slam tournament. No. 1 Djokovic could face No. 8 Federer in the quarterfinals, and one of them could meet No. 3 Nadal in the semifinals.

The other half includes No. 5 Stefanos Tsitsipas and No. 6 Alexander Zverev, who are among the 20-something men considered contenders to grab a first major trophy, along with No. 2 Daniil Medvedev and No. 7 Andrey Rublev.

Things look quite different in the women's game, where the question is which player might extend the recent run of success of the younger set in women's tennis. Iga Swiatek, for example, won last year's French Open at age 19 (she turns 20 on Monday). Other relatively recent Slam champs include Ash Barty, 25, Sofia Kenin, 22, and Bianca Andreescu, 20.

And then there is someone like Coco Gauff, still just 17, who keeps moving up the WTA rankings. She is seen as part of a group of possible future stars ready to step forth as Serena Williams, who is 39, gets closer to moving on.

As in any sport, eventually there is turnover. The guessing game in tennis has been about both who will break through and when.

With Federer turning 40 in August, Nadal turning 35 next week and Djokovic now 34, there did seem to be some recent evidence that such a shift might be happening, including in the rankings, where Medvedev is the first man other than those three or Andy Murray to be ranked in the Top 2 in 15 years.

Thiem's triumph in New York at age 27 made him the first man born in the 1990s to win a Grand Slam title. Runner-up Zverev and the other semifinalists at Flushing Meadows also belong to that decade. The 2020 U.S. Open was the first Slam since 2004 without at least one of Djokovic, Nadal or Federer in the semifinals.

A caveat, though: Neither Federer (coming off two knee operations that sidelined him for more than a year ) nor Nadal entered the U.S. Open, and Djokovic was disqualified in the fourth round.

But at the last Masters 1000, on clay at the Italian Open this month, Djokovic faced Nadal in the final. Nadal won.

After beating Tsitsipas in the semifinals in Rome, Djokovic ran into Nadal in the locker room.

"We kind of joked around," Djokovic said, "that the old guys are still not giving up." 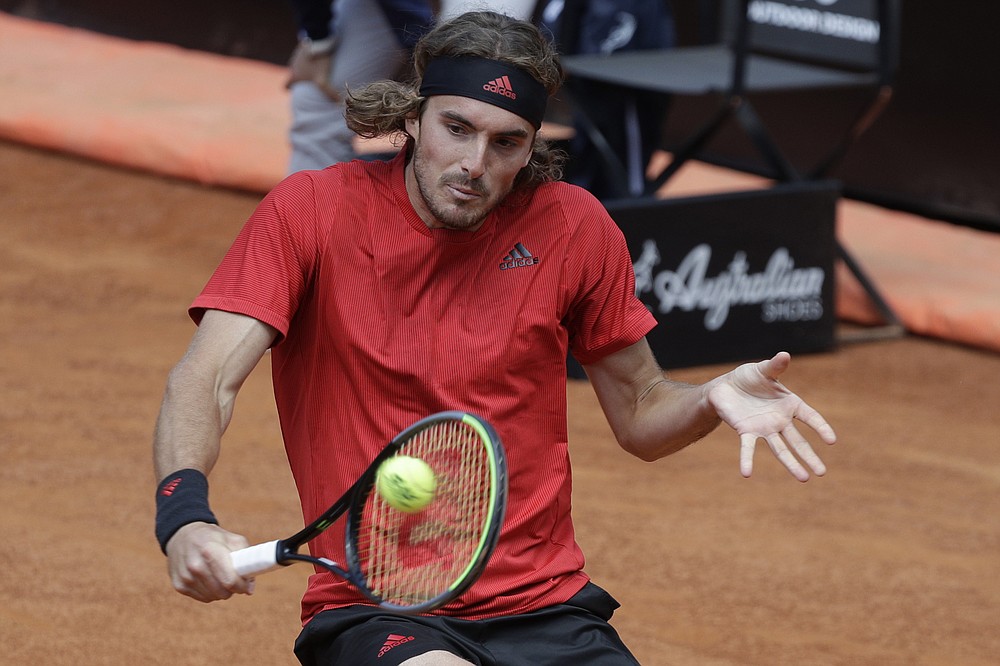 FILE - In this May 15, 2021 file photo, Greece's Stefanos Tsitsipas returns the ball to Serbia's Novak Djokovic during their quarter-final match at the Italian Open tennis tournament, in Rome. When the French Open starts Sunday, May 30, in Paris, there will be those looking for a changing of the guard in men’s tennis, Tsitsipas and Alexander Zverev are among the 20-somethings considered contenders. (AP Photo/Gregorio Borgia, File) 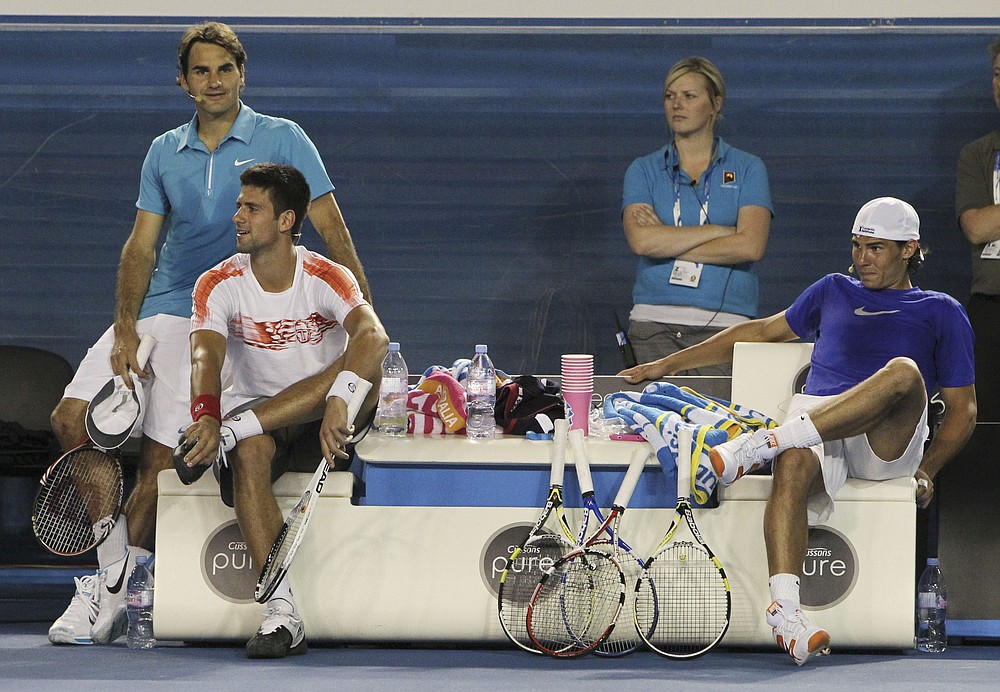 FILE - Roger Federer of Switzerland, left, Novak Djokovic of Serbia, second left, and Rafael Nadal of Spain watch an exhibition tennis match in Melbourne, Australia, in this Sunday Jan. 17, 2010, file photo. Novak Djokovic, Rafael Nadal and Roger Federer all ended up in the same half of the French Open men's field in the draw Thursday, May 27, 2021, meaning no more than one of them can reach the final. (AP Photo/Mark Baker, File) 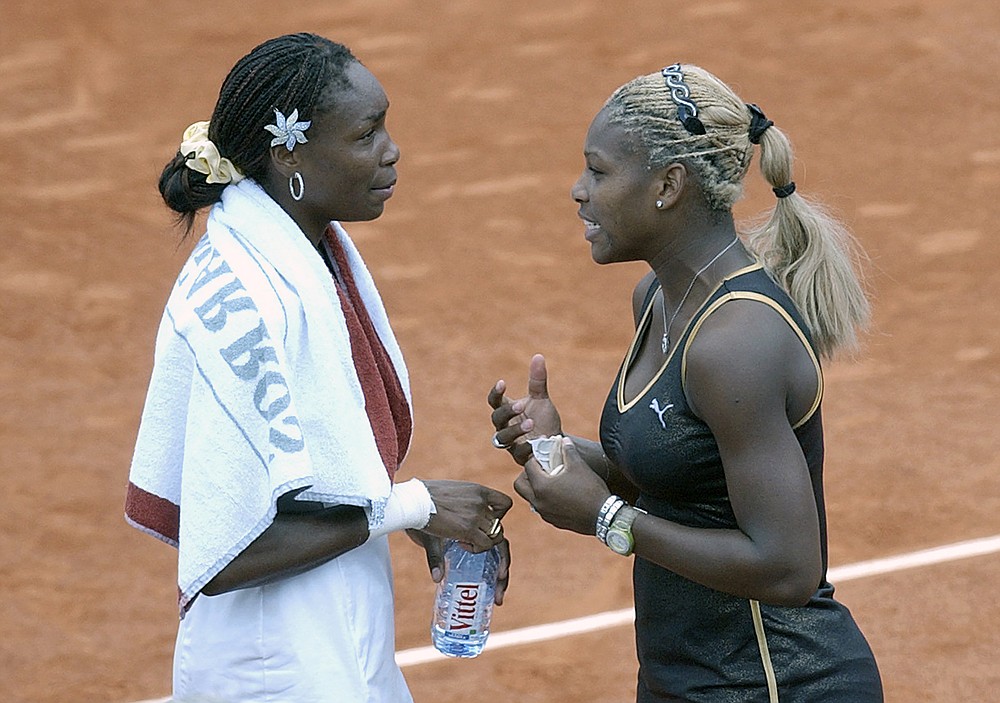 FILE - In this June 8, 2002, file photo, Serena Williams, right, talks with her sister Venus after Serena won the women's final of the French Open tennis tournament at Roland Garros stadium in Paris. Serena Williams defeated her sister Venus 7-5, 6-3. Williams has only won two clay-court matches over the past two years and says her lack of competition on the surface makes her uncomfortable ahead of the French Open. The tournament begins Sunday in Paris. (AP Photo/Christophe Ena, File)
ADVERTISEMENT