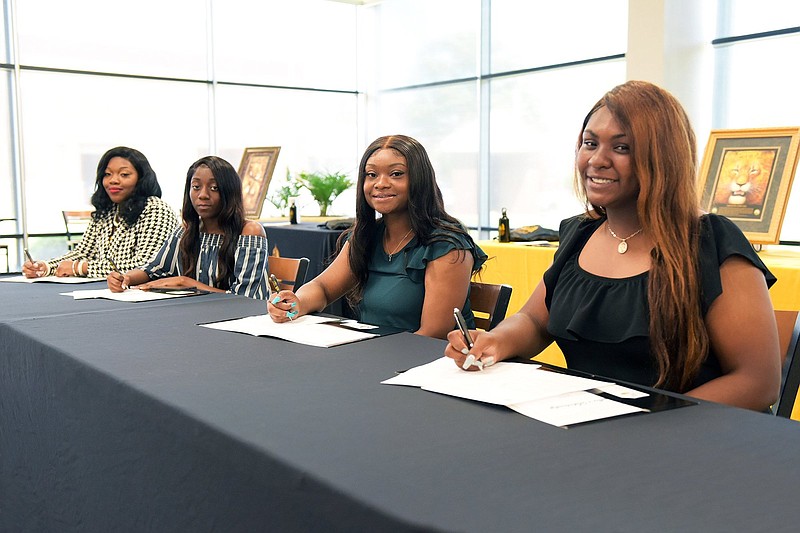 For the first time, all valedictorians of high schools within the city of Pine Bluff have committed to attend the University of Arkansas at Pine Bluff.

"This is monumental for UAPB and the community – keeping our talent here," enrollment management and student success Vice Chancellor Braque Talley Sr. Said in a news release.

Jackson had previously intended to attend Grambling State University but said she was persuaded by family members and campus staff to stay in Pine Bluff during a program that she said made her and the other valedictorians feel special.

"At first, I thought we were going on tour," Jackson said. "But it was a full-on program. They had an introduction of us. They introduced us to the staff. The chancellor and vice president spoke as well."

The administrators, Jackson said, made her feel important and "not like a number."

"People were coming up to me and did their research and they wanted me there," she said. "They made me feel home. Why would I take my talents somewhere else when I have an HBCU right here at home?"

Jackson plans to major in English and minor in political science with hopes of attending law school.

Handy had previously expected to attend the University of Central Arkansas. She and Lambert plan to major in nursing and become registered nurses.

Thompson committed to playing in the UAPB Marching Musical Machine of the Mid-South band. She will major in biology with hopes of becoming a doctor or entrepreneur. Her business goal is to own a healthcare facility called Thompson Care, according to the news release.

"We must work to attract and retain top talent in our state and help make lasting, transformative investments in our future students and local schools that will have positive impacts for generations," institutional advancement Vice Chancellor George Cotton Sr. said.

Each valedictorian accepted a scholarship to attend UAPB.

"We want our local students to know that UAPB is a viable option," scholarship coordinator Amanda Kirklin said.