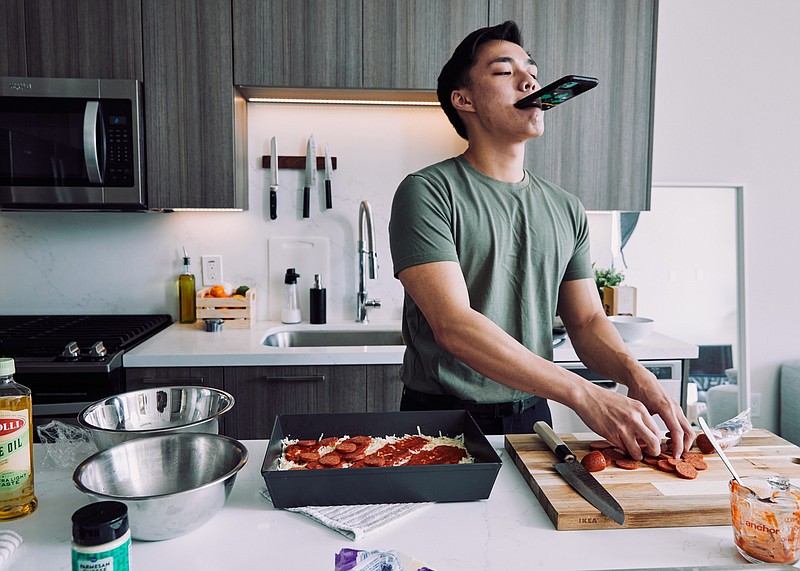 Newton Nguyen films a cooking video for TikTok at his home in Los Angeles, May 17, 2021. Nguyen is one of the best-known food creators on TikTok, with almost seven million followers. (The New York Times/Adam Amengual)

Eitan Bernath, a 19-year-old TikTok star with more than 1.6 million followers, began posting cooking content to the platform in 2019. Like many Generation Z TikTok chefs, he taught himself to cook by watching YouTube and the Food Network. He would share the things he made on Instagram but never gained much traction.

Within 24 hours of posting his first TikTok, however, he had tens of thousands of followers.

Bernath, whose demeanor is upbeat and approachable, began sharing short, easy-to-make recipes that other beginner cooks and his teenage peers could make at home. The videos took off.

"TikTok is the biggest thing that happened to me in my career, and honestly the reason why I am where I am today," he said.

In 2018, when TikTok was officially introduced in the United States — it was already enormously popular elsewhere around the world — the app was synonymous with lip syncs and dance challenges. But food content exploded on the platform in early 2020, when millions were stuck at home during quarantine.

Videos with the hashtag #TikTokFood have collectively amassed 25.2 billion views, and the app regularly spawns viral food crazes, such as whipped coffee and a pasta dish with baked feta and tomatoes now known as the "TikTok pasta." A video that shows you how to make a three-ingredient Oreo cake has more than 42.1 million views.

TikTok has also given birth to a generation of cooking stars who didn't put in years in a professional kitchen or at a glossy food magazine, and who are often showcasing recipes they find online rather than developing their own. They've become famous on the internet remarkably fast.

"The thing that makes TikTok outstanding compared to any other platform is the speed of scale," said Eunice Shin, head of media and entertainment at Prophet, a growth strategy firm. "If something goes viral, you can go from zero to millions of followers in a matter of months. That's really hard to do if you take a traditional trajectory."

"The trend we're noticing is younger and younger talent making a name for themselves as a result of adopting the platform," said Jad Dayeh, the head of digital media at Endeavor, a top talent agency.

Many Gen Z stars on FoodTok, as some call the food community on the app, wonder why anyone would pay their dues at a grueling restaurant job when they could be building their own brand online. Others are leaving the restaurant business to pursue full-time careers as content creators. And several are monetizing through TikTok's creator fund, which pays content creators based on how many views their videos get, and through advertising deals and sponsorships.

A LINE OF CHOCOLATE BARS

Creators on TikTok can earn anywhere from a few bucks to millions of dollars.

TikTok star Addison Easterling, who produces lifestyle content, earned more than $5 million in 2020 alone, according to a Forbes report. Tabitha Brown, a vegan cook, has attracted more than 4.7 million followers on TikTok and will release her first book of inspiring personal stories in the fall. Christian Paul, an Atlanta-based baker with more than 1.3 million followers on TikTok, created a line of chocolate bars.

Some up-and-coming food creators say they're already making six figures. Ultimately, what they want is to build their own businesses, whether by launching a cookware line, publishing a cookbook or opening a restaurant. What they don't want is to work for someone else.

Many say their lack of conventional training is a key part of their success.

"If you look at the primary people in traditional food media," Bernath said, "they're all classically trained or restaurant chefs. They have a ton to offer and a great amount of culinary knowledge, but I think what TikTok has done with Gen Z and teaching people how to cook, it's just more relatable. The feedback I hear all the time is, 'If this 18-year-old Eitan can cook this so effortlessly, then I can, too.'"

Every platform pioneers a new type of viral food content. Facebook and BuzzFeed Tasty ushered in an era of easy-to-follow recipes prepared by a pair of disembodied hands. YouTube offered a home for more complex recipes and 20-minute cooking vlogs. Instagram brought camera-ready viral treats to the masses with photos of Cronuts and ramen burgers.

If TikTok has a dominant food-video format, it's a camera propped up on a counter as a person cooks in front of you. It's almost as if you're FaceTiming a friend while they make themselves dinner. The result is a casual, personality-driven cooking clip that feels easy to follow. Most TikTok cooks are people who are preparing food in their home kitchens, and it's commonplace for friends or family members to pop into the frame.

"Recipes that are going viral on other social platforms are just visually appealing — you drool over them, but you never make them," said Ahmad Alzahabi, 24, a TikTok food star in Flint, Mich., with more than 3.7 million followers. "TikTok has allowed people to document their family gatherings, what they make at home. It doesn't have to look as pretty." 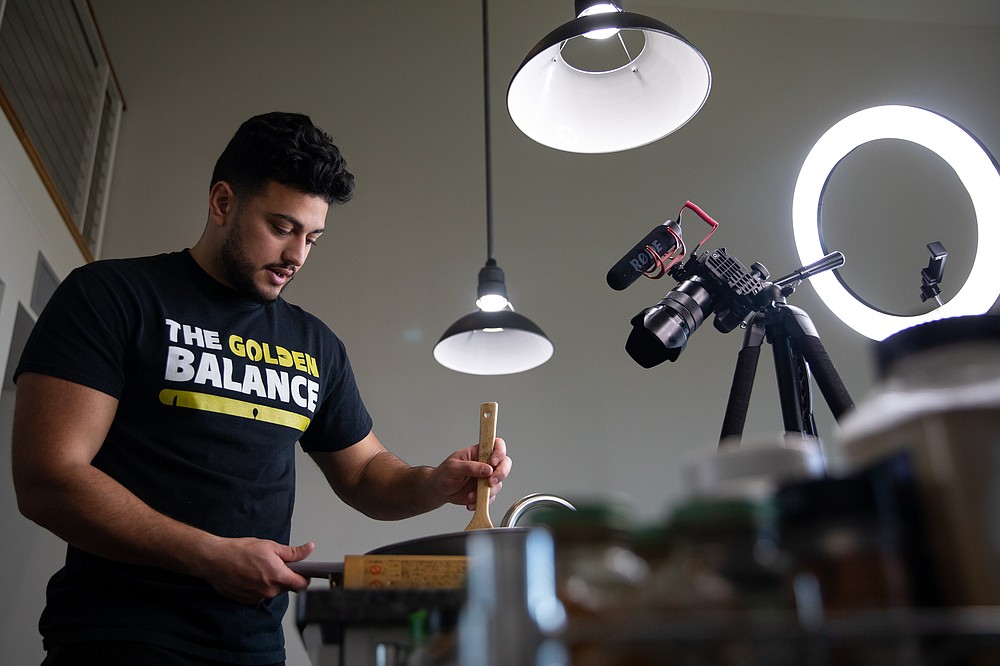 Ahmad Alzahabi, who runs his own food media company called the Golden Balance, films a cooking video at his home in Flint, Mich., May 17, 2021. "Recipes that are going viral on other social platforms are just visually appealing, you drool over them, but you never make them," said Alzahabi. "TikTok has allowed people to document their family gatherings, what they make at home. It doesn't have to look as pretty." (The New York Times/Emily Elconin)

TikTok also makes it easy to create. Users upload videos that are up to a minute long and set those videos to sound. You can add title cards, captions and fun effects like zooming or face warping. While editing videos for YouTube requires knowledge of third-party editing software, you can shoot, edit and post videos to TikTok from your phone. TikTok also allows prolific users to organize their videos into collections, such as "pie recipes" or "dinner ideas," and offers functions like livestreaming to keep fans engaged.

The app's algorithm can create overnight sensations. The primary way users consume videos is through the "For You" page, an algorithmically programmed feed TikTok delivers to users based on what they've watched or engaged with before. If the algorithm picks up that you like Mexican food, for instance, it will show you more Mexican food cooking videos. 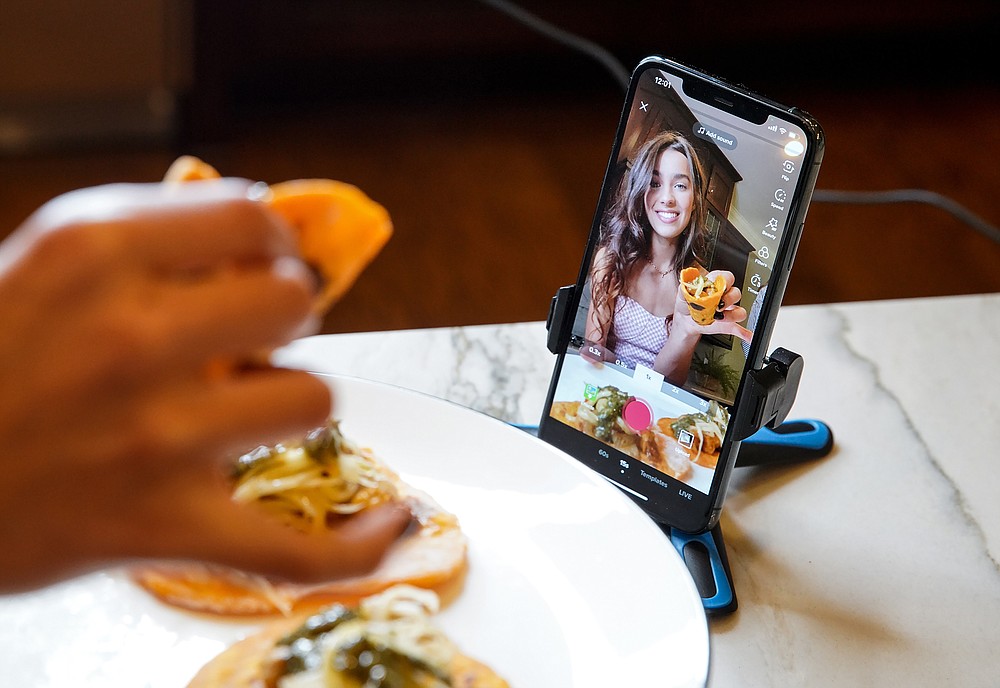 Halle Burns films a TikTok in Alpharetta, Ga., May 18, 2021. Burns began posting cooking videos on TikTok during the pandemic, and specializes in vegan recipes. (The New York Times/Rinne Allen)

Many top TikTok cooks got their start when they were stuck at home in quarantine. Halle Burns, 19, a TikTok food creator in Atlanta with more than 1.8 million followers, began creating soothing vegan cooking videos in spring 2020.

"I didn't have anything else to do, and so I started making food videos," she said. A year later, her relaxing videos have caused fans to call her the "Bob Ross of cooking."

Brandon Skier, 28, started his cooking channel on TikTok under the name "Sad Papi," after the restaurant he worked at in Los Angeles closed because of covid-19. Unlike many of his younger peers, Skier did attend cooking school, and he uses his traditional culinary skills to teach people how to make five-star meals at home. In true TikTok fashion, though, he keeps the recipes approachable for beginners.

"It's fine-dining food and techniques, with the vibe that you're just hanging out in your friend's kitchen," he said.

Skier also produces content for Hedley & Bennett, a popular apron brand. He has no plans to return to cooking in a restaurant kitchen.

Some TikTok cooks are making a transition to Hollywood. Bernath signed with the agency Endeavor in 2020, and in December he announced he would be joining "The Drew Barrymore Show" as its resident culinary expert.

Bernath has also upgraded his kitchen since finding stardom. He recently rented a large loft in downtown Manhattan for video shoots, a big step up from his former home kitchen in New Jersey.

"I own my production company, and it has expanded in the past six months, so I now have three full-time employees on staff who help facilitate and create all the content," he said. He plans to continue hiring more staff members every few months.

While he was hunting for his apartment, a good kitchen was key. "I don't know if you saw my old TikToks, but I used to live in a mobile home," he said. "My kitchen was very small."

Food creators said they wanted to communicate to their audiences that anyone could cook good food, regardless of background or budget. "What TikTok has created a space for is food that's extremely achievable," said Bettina Makalintal, a food and culture staff writer at Vice.

Many find their recipes on social media and other websites, pulling cooking tips from platforms like Reddit and Snapchat into their videos.

"I think the older generation, they're very cookie cutter," he said. "If you want to make a recipe, they think there's a certain way to make it. I think this younger generation, especially in America with all the cultures that are mixing together, I think there will be a new breed of insane foods that are combining all these cultures and ethnicities."

As fans become better cooks, some start channels of their own. Skier said new names in food are popping up every day because of TikTok.

"A couple people I'm friends with right now are in the process of blowing up, and they started a month ago," he said. "If you make good content and good food, you can blow up, too." 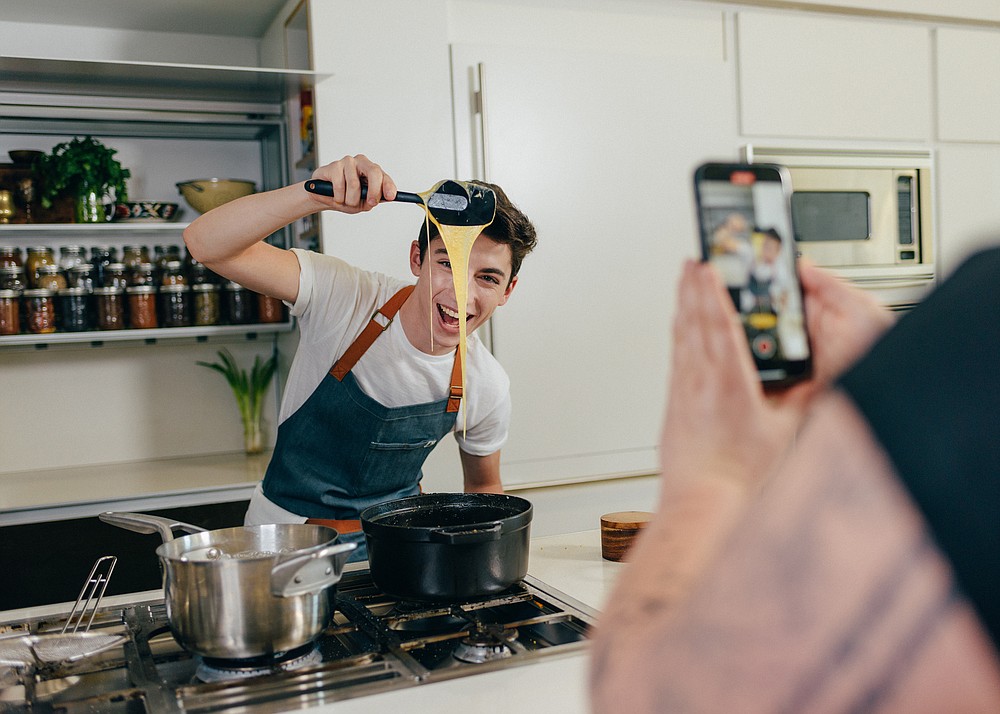 Eitan Bernath, a 19-year-old TikTok star with more than 1.6 million followers, films a cooking video at his home in New York, May 17, 2021. "TikTok is the biggest thing that happened to me in my career, and honestly the reason why I am where I am today," said Bernath. (The New York Times/Timothy O'Connell)