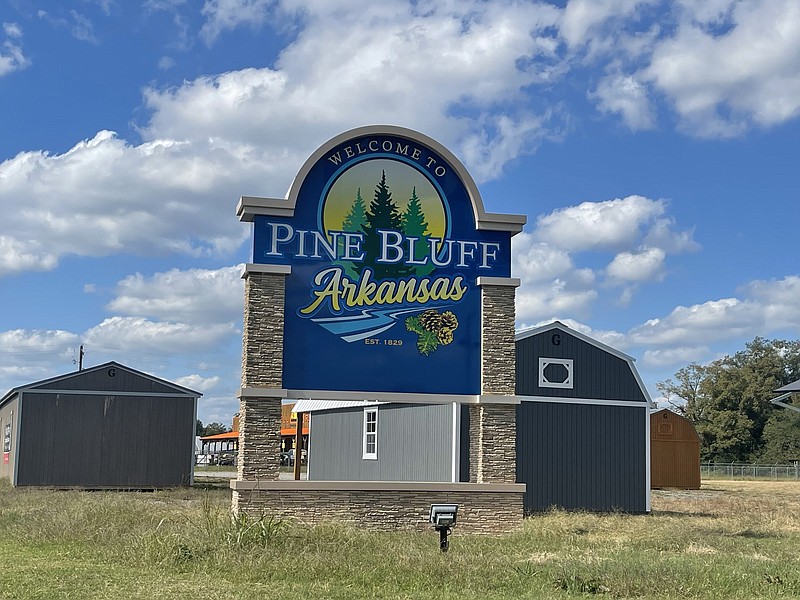 As part of Go Forward Pine Bluff's initiative and after two and half years of planning, the construction of three new welcome signs has finally been completed.

On Oct. 12, construction crews began installing the signs, which rise as high as 22 feet high, in various locations of the city. Signs are now located at the Pine Bluff/White Hall entrance, Highway 65 by Shell Ross Co. and by Walmart on Highway 63.

"For a long time, our sign did not reflect the attitude and pride of our people," said Go Forward's CEO Ryan Watley, who noted his own excitement about completion of the project. "This sets a new tone and raises the bar of what we are trying to do in Pine Bluff."

It's not hard to notice the towering signs on a faux veneer stone structure, especially at night with the illuminated LED wording.

"I think it's a good symbol of the rich history of Pine Bluff with a modern twist," said Alex Thrower of Pine Bluff. "A good urban refresher is always needed."

Eric Walden Jr. said the signs are a good look for the city.

"Pine Bluff is working hard to rebrand itself as a destination place," said Walden, the assistant chief of staff with the Sixth Division Circuit Court for Circuit Judge Earnest E. Brown, Jr., where he works to assist the court with providing rehabilitation and services to the youth and families of Jefferson and Lincoln County Arkansas. "There's so much negative, but Pine Bluff especially for me has been a place of opportunity."

Watley gave much credit for the completion of the project to William Fells from the mayor's office who handled all of the administrative duties and kept the process on track.

In a previous interview, Watley said Pine Bluff is moving into a different period, adding that he wanted the city to be comparable and competitive with other cities.

"Some people will say this is long overdue and I would agree," said Watley. "This is just another piece of the puzzle and Pine Bluff just catching up by just doing the basic things."

An original location for one of the signs was at the Martha Mitchell split, but Watley said the Arkansas Department of Transportation's regulation would not allow for such placement.

"We couldn't put one on I-530 because the highway commission wouldn't allow it," he said.

Tavante Calhoun of Pine Bluff said he is a supporter of Go Forward and all things positive in Pine Bluff.

"The sign is another step to show pride and promote the city and its greatness," he said. "Anything worth remembering has a name and is proud to display it. It is time that Pine Bluff displays its name for all the great things and people who are here."

With hope the signs will become a sense of pride as Pine Bluff rebrands themselves, many citizens say the signs make them feel good about their city.

"Those entrance signs help others to feel welcome, a part of the city," said Walden. "...and helps let others know Pine Bluff is open for business and wants them to see all there is to offer."