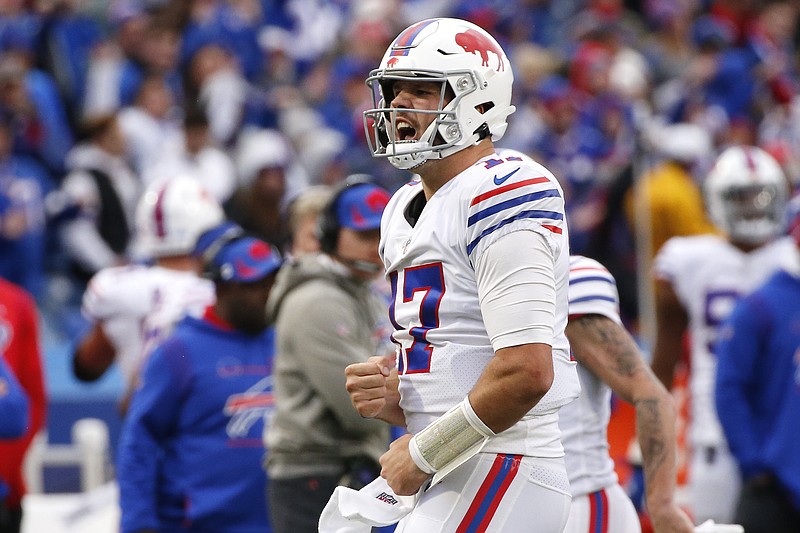 Buffalo Bills quarterback Josh Allen (17) celebrates after his touchdown during the second half of an NFL football game against the Miami Dolphins, Sunday, Oct. 31, 2021, in Orchard Park, N.Y. (AP Photo/Jeffrey T. Barnes)

Buffalo's star quarterback simply wants to shake hands with his namesake before and after the game. Jacksonville's standout defensive end would prefer a less formal and much more aggressive get-together -- in the backfield.

The game featuring the unrelated Allens takes place at TIAA Bank Field when the Jaguars (1-6) host the Bills (5-2). It's a matchup between two guys with identical first and last names selected in the exact position in consecutive NFL drafts.

Buffalo traded up five spots to select Joshua Patrick Allen with the seventh overall selection in 2018. Jacksonville landed its Joshua Allen at No. 7 a year later.

"We've never actually met in person," the quarterback said. "We've messaged on Twitter and Instagram. Obviously, we follow each other: first round, seventh pick two years in a row, Josh Allen's the pick. That was pretty cool.

"We've shared, just exchanged messages, just common name and draft pick. A big fan of his. He's a great player. I know he's coming into his own right now and we've got to be prepared for him because he can ruin a game plan. That's why he was drafted so high and he's playing at a really high level right now."

Jacksonville's Allen has 17½ sacks in three seasons, including 4½ this year. He's coming off his second multi-sack game in two years, a two-sack performance in a 31-7 drubbing at Seattle. He's one of the key building blocks on one of the league's worst defenses.

"We're going to get after them, but we have to do it early and throughout the whole game."

Buffalo's Allen is a big reason for the team's success. He's completed 65.4% of his passes for 1,972 yards, with 17 touchdown passes and 3 interceptions. He's also tied for the team lead with three rushing touchdowns.

"They run this quarterback a lot," Jaguars Coach Urban Meyer said. "He is a seven or eight [carries a game] kind of guy, and I mean direct calls. I did not think I would see much of that at this level, but he is a big cat and he is a competitive guy. There are a couple times you see he could go out of bounds, but he does not go out of bounds."

Buffalo's Allen has two former college teammates playing for Jacksonville: safety Andrew Wingard and tight end Jacob Hollister. The trio played together at Wyoming in 2015 and 2016.

But all eyes will be on the Allens in this one. They don't often get confused for one another, but it has happened.

"I actually got an email [of his]," Jacksonville's Allen said. "I'm not going to tell his business, but I got an email for him and I'm reading. I'm like, 'Oh, yeah.' Then I went to the bottom and I was like, 'I don't think this one was for me.' So that was the only hiccup I got from just outside of like just fans or whatever."

Pressed for details about the nature of the email, Allen, who went to Kentucky, hinted that it had financial implications.

"It would have been good if it was on me, I'll tell you that," he said. 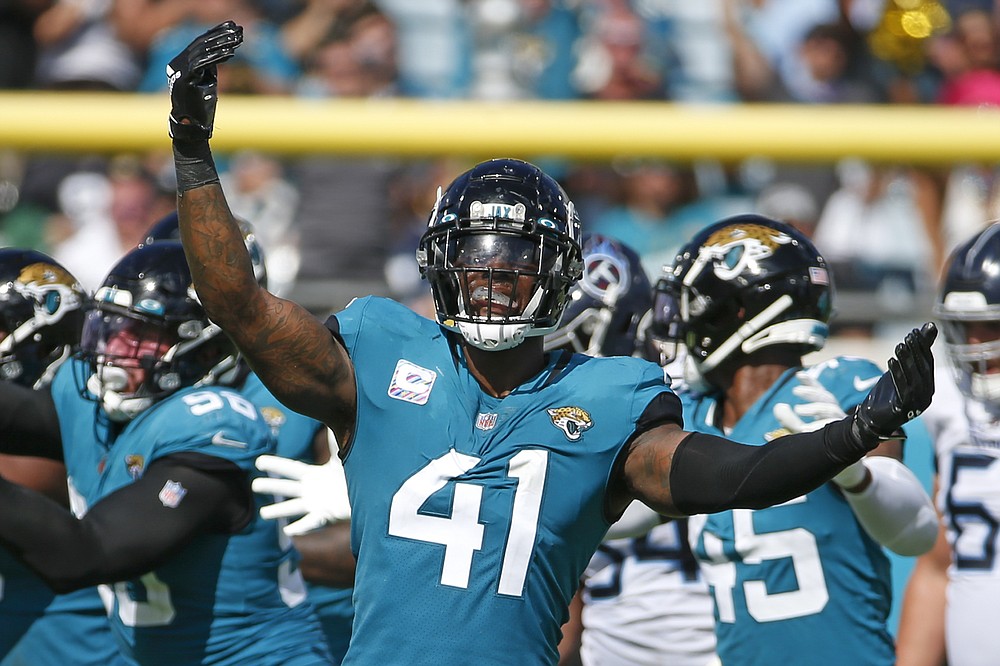 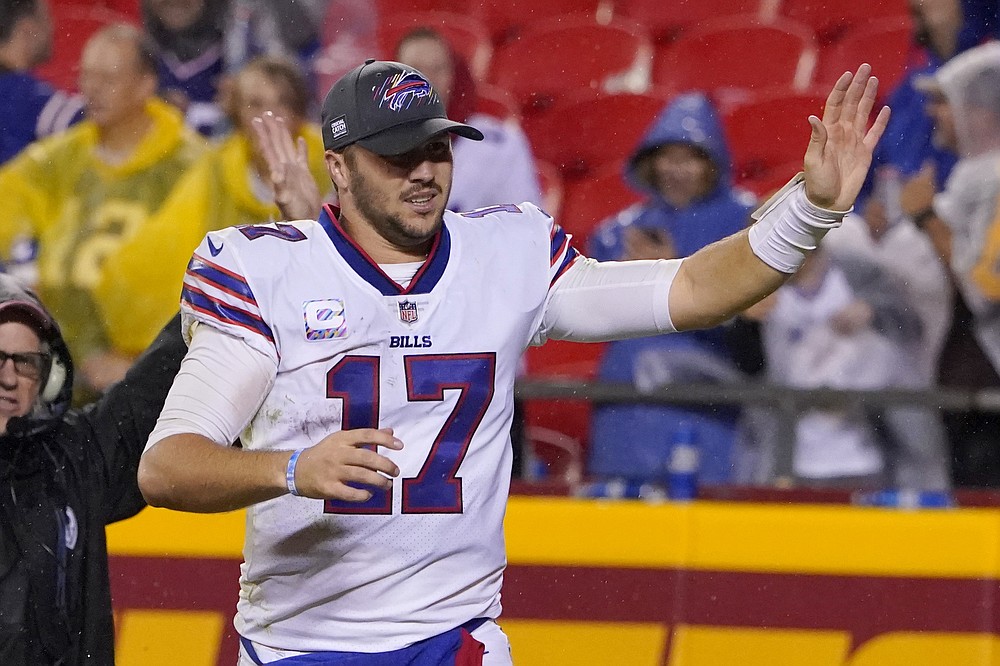 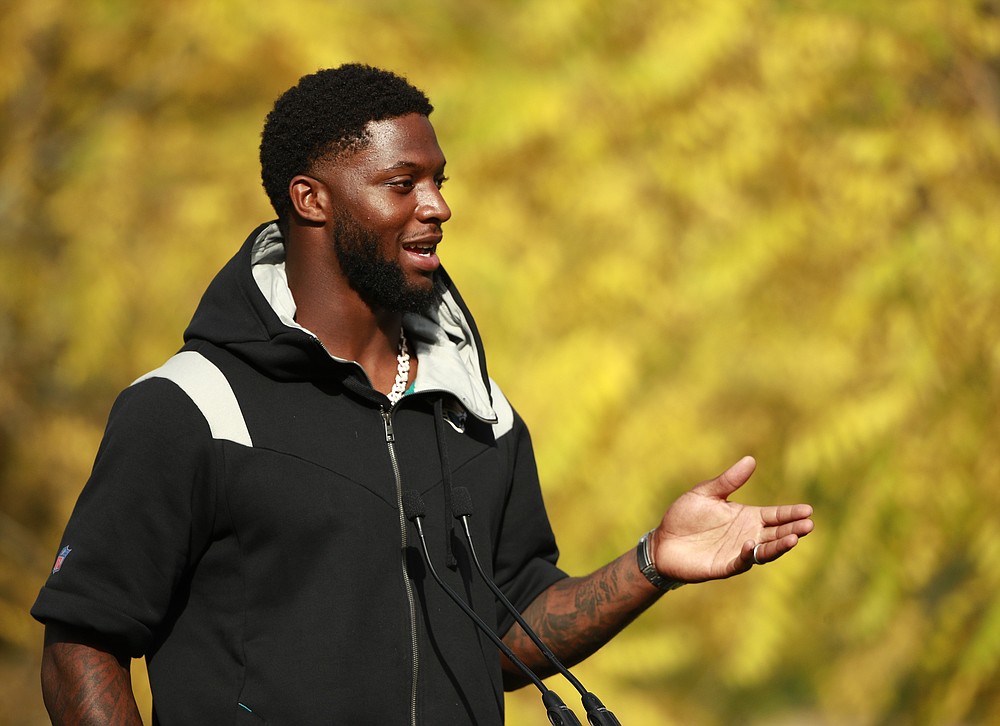 Jacksonville Jaguars outside linebacker Josh Allen (41) gestures as he answers a question during a practice and media availability by the Jacksonville Jaguars at Chandlers Cross, England, Friday, Oct. 15, 2021. The Jaguars will plat the Miami Dolphins in London on Sunday. (AP Photo/Ian Walton) 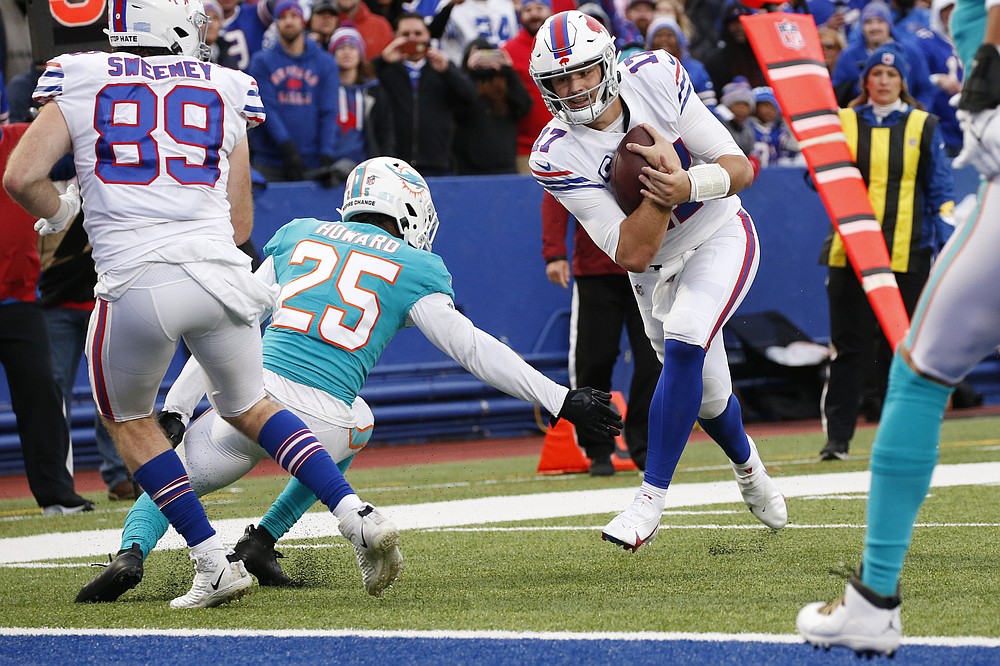 Buffalo Bills quarterback Josh Allen (17) hangs onto the ball as he passes Miami Dolphins cornerback Xavien Howard (25) on his touchdown during the second half of an NFL football game, Sunday, Oct. 31, 2021, in Orchard Park, N.Y. (AP Photo/Jeffrey T. Barnes) 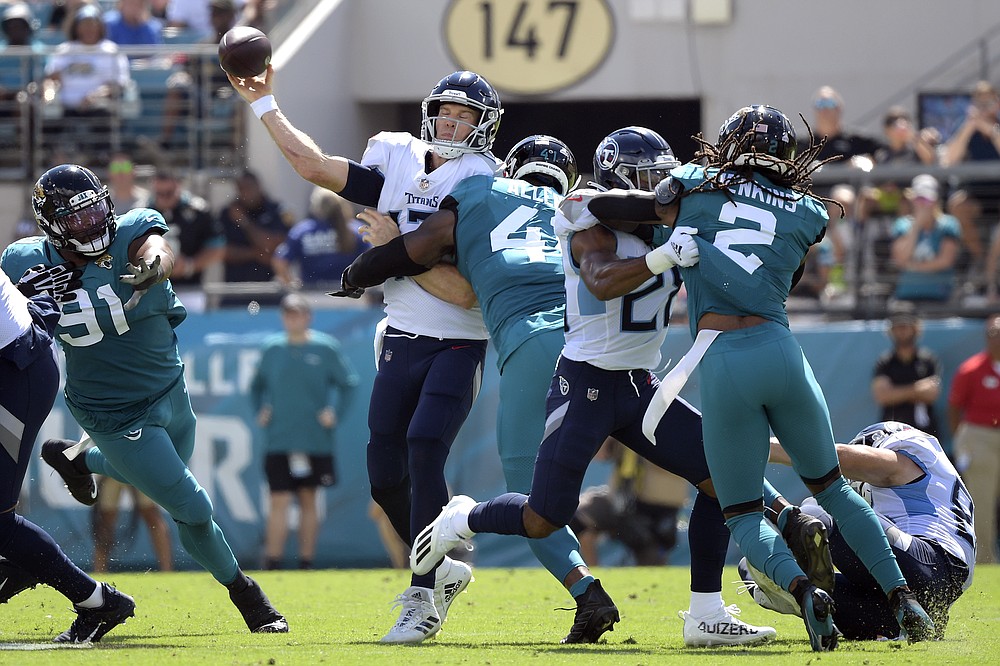 Tennessee Titans quarterback Ryan Tannehill, center, is hit by Jacksonville Jaguars outside linebacker Josh Allen (41) as he releases the ball during the first half of an NFL football game, Sunday, Oct. 10, 2021, in Jacksonville, Fla. (AP Photo/Phelan M. Ebenhack)