OPINION | REVIEW: Newest Marvel movie has too many intriguing characters, not enough time to explore them 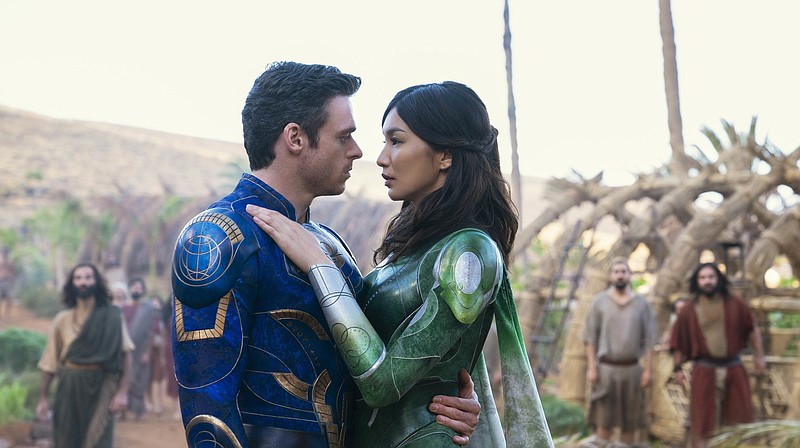 Power couple: Ikaris (Richard Madden) and Sersi (Gemma Chan) are part of a group of 10 not-quite-gods sent to Earth by the Celestials to defend it from a race of monsters called the Deviants in Chloe Zhao’s Marvel Comics adaptation “Eternals.”

With some films, finding one intriguing character is a challenge, so it's somewhat disappointing that co-writer-director Chloe Zhao's adaptation of "Eternals" seems to have too many of them.

With almost enough protagonists to make a football squad, some solid performers seem to be fighting for attention instead of beating up extraterrestrial demons.

Yes, this is a Marvel movie, but much of the reason your Halloween was filled with characters from that universe is because six decades ago, Stan Lee and legions of collaborators gave superheroes real world neuroses and had them deal with issues we mortals face every day like drug addiction and racism.

Autuers like Federico Fellini and Alan Renais loved Marvel Comics (Renais even tried to make a movie with Stan Lee), and some of the stories and characters give actors just as substantial a workout as the movies they make without a lot of special effects. Michael Keaton's turn in "Spider-Man: Homecoming" or Michael B. Jordan's performance in "Black Panther" are equal to anything else they have done.

In this movie, Salma Hayek brings a wonderful maternal touch as Ajak, the leader of a group of ageless warriors from a world known as Olympia, who are told to use their skills to protect the fledgling human population of Earth against a ravenous race of predators known as Deviants. Hayek's husky voice exudes warmth and understanding and makes her seem just a hair wiser than the rest of her team even though all of them can live indefinitely.

And she has good fighting stances.

The rest of her team consists of Ikaris (Richard Madden), who can fly and shoot death rays out of his eyes. He takes out lots of Deviants, but his impulsiveness makes him a questionable commander. Part of the reason he fights so fiercely is that he's carrying enough baggage to fill La Guardia.

Thena (Angelina Jolie) can spontaneously generate glowing blades and has a cardio regimen no other being on earth can match. If her weapons don't kill you, she'll exhaust you with her refusal to quit. Sadly, outliving Chinese dynasties carries a huge psychological toll, so she can turn on her peers without warning.

Sprite (Lia McHugh) resents her status because she'll always be a child, but when you can change your own form or make illusions, there are advantages. Gilgamesh (Don Lee) could probably level cities with his punches, and Kingo (Kumail Nanjiani) can make fireballs when he's not starring in Bollywood hits. He may be the only film star for whom special effects are optional. Phastos (Brian Tyree Henry) can invent more things than Thomas Edison, Eli Whitney and Nikola Tesla combined, and the Makkari (Lauren Ridloff) doesn't let deafness stop her from outrunning anything else on the planet.

Oh, and Druig (Barry Keoghan) can take out opponents by simply taking over their brains.

Each of these characters could have a movie of his or her own, and that's sometimes a problem. If the cast had been cut in half, it might have been more thrilling to watch them struggling to take out Deviants while Thena is having a psychotic episode. Jolie plays breakdowns well, and this would be a great showcase for her skills. One of the charms of the early Marvel comics is that the Fantastic Four were bickering with each other when they weren't fighting Doctor Doom.

In some ways, it made the struggle more heroic.

Most of the story is told from the point of view of Sersi (Gemma Chan), who teaches history when she's not turning potentially dangerous objects into innocuous ones. She's attached to a fellow teacher Dane Whitman (Kit Harington, "Game of Thrones") and can't quite tell him that she has superpowers and will outlive him.

That makes moving in with him a non-starter.

This in itself could have been a great storyline. Is it possible to fall in love with someone who won't be there any longer than 30 or 40 years. The Captain America movies toyed with that possibility, but Harington and Chan barely get any sparks flying before the computer-generated images show up.

Running almost long enough for a pair of films, Zhao flits between her characters and only occasionally gives them room to shine. If she cut her team down to the size of a basketball squad, there would be more room for chemistry and character development.

A villain with some type of flesh would be helpful, too. Tony Leung's tormented father in "Shang-Chi and the Legend of the Ten Rings," Josh Brolin's Thanos in "Avengers: Infinity War" and Jordan's Killmonger in "Black Panther" are infinitely more gripping than the wiry Deviants. The digital overkill at the end seems more like a laser light show than a finale.

Because thousands of people worked on this film, it's hard to tell if Zhao should have been more forceful in conveying the human side of her characters or if Marvel mastermind Kevin Feige should have given her and her co-writers more room to work.

"The Death of Stalin," "A History of Violence" and "Ghost World" are masterful films that were made from comics. "Eternals," while still moderately entertaining, should have been in the same league.

Rating: PG-13, for fantasy violence and action, some language and brief sexuality

Sprite (Lia McHugh), seen here with Sersi (Gemma Chan), has the perpetual appearance of a pre-teen, though she was already thousands of years old when she inspired William Shakespeare to create the character Puck in his play “A Midsummer Night’s Dream.