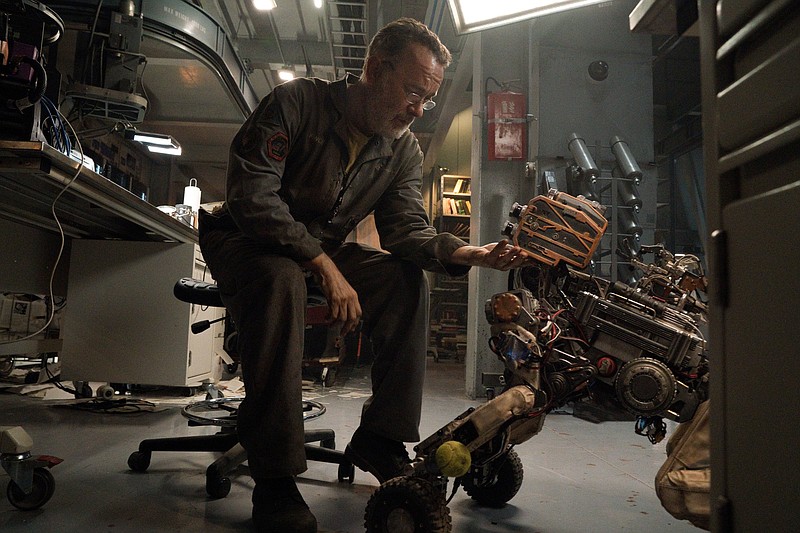 The last man on Earth, ailing inventor Finch Weinberg (Tom Hanks), invents an android to accompany him and and his dog on a trek across the post-apocalyptic landscape in “Finch.”

Most of the time with movies all you have to do is say "Tom Hanks," and I'm in. But throw in a cute little dog and a silly robot trying to discover its own humanity in the apocalypse? I'm double in. And that's the lovably basic premise of "Finch."

The movie seems like an odd combination of "WALL-E" and "The Day After Tomorrow," and I mean that in the best way possible. Hanks can do a lot of things, but even he probably wouldn't be most people's first pick for a big science fiction film like this. Most fans might imagine Will Smith or Chris Pratt as one of the last humans alive on the planet.

But Hanks does a brilliant job of playing a grizzled old engineer who has cobbled together a continued survival on a planet cooked by ultraviolet radiation and massive storms. The film is set not too far in the future. It opens with Finch (Hanks) scrounging for supplies while humming "American Pie" in an abandoned grocery store.

He's wearing this homemade astronaut suit, complete with helmet and visor to protect him from 150-degree temps in the sunlight that'll scorch his skin in seconds thanks to holes in the ozone layer. Accompanying Finch is a little rover that has eyes, four wheels, a basket, and a robot arm. It's named Dewey, and it's the cutest little helper.

"Finch" wastes no time setting up environmental excitement as a massive dust storm closes in on St. Louis where Finch lives, and he has to drive a dump truck with an automated voice on his wrist computer telling him the storm is getting closer. And it's big enough to seemingly envelop the entire city.

After a tense drive, he races into his lab's parking lot and makes it inside the door as the storm hits, but he has to rescue Dewey, holding onto a rope and about to be swept away in the storm. It immediately sets the grim tone that the world is not OK, and there are very few people left in it.

It also establishes "Finch" has the special effects budget of any theatrical blockbuster and rightfully deserves praise for that since it's going straight to Apple TV+. Make no mistake. This is no made-for-TV film.

Finch returns to the lab, where the audience is introduced to the one thing keeping him going each day, a dog named Goodyear. The film also reveals the titular engineer has been working on an artificial intelligence named Jeff (Caleb Landry Jones). Not long after Finch gets the robot speaking and loads thousands of books-worth of knowledge into its brain, a storm alarm goes off.

Jeff informs Finch a giant storm is coming to St. Louis that will certainly kill him and Goodyear. It'll last something like 30 hours, and Finch's lab won't withstand it. The trio has 24 hours to leave before the storm hits, and Finch makes the immediate decision to get out of there as soon as Jeff can walk in his new robot body.

It seems that (somehow) Finch has developed an AI capable of learning. And while the movie yadda yaddas over the more technical details like how a single scientist invented an AI and a robot body capable of walking around like a human, it's monumentally impressive how the film transitions Jeff from a robot to a real person in the span of one hour and 55 minutes.

When Jeff speaks at first, he has trouble just reciting the four basic laws programmed into him, three of which Isaac Asimov fans should appreciate. They're lifted almost straight from his 1942 story, "Runaround." Basically, don't harm humans. Don't allow harm to come to humans. Stuff like that.

As Finch takes Goodyear and a rapidly learning Jeff in an RV across the country, heading for San Francisco, the group runs into more extreme weather perils, a dangerous trap with violent people in Denver and moments of learning for Jeff, some louder and more frustrating for Finch than others.

Hanks really sinks into the performance as a stern father, telling Jeff stories to teach him morals and relaying human experience to him. He loses his temper sometimes, and I swear during some scenes I was just waiting for Finch to yell at Jeff, "There's no crying in baseball!"

I can't emphasize enough how impressive Jeff's development is written and performed throughout Finch. He sets out on his own scavenging adventure with Dewey when Finch is sick in bed, pouts in his room when Finch snaps at him, and does things a normal teenager would do, like driving the RV without permission and then looking guilty when caught. It's the best part of the entire film.

And Goodyear isn't just some cute mascot. There's a slow buildup between Jeff and this dog as the robot tries to earn the animal's trust, something Finch encourages. When they start out, Goodyear hates Jeff.

While "Finch" boasts a small cast, it does impressive stuff with its trio. And I'd rather have a tight cast of well-written and developed characters than a wide group of characters who struggle to change all throughout the movie.

The one weakness in "Finch" is it might yadda yadda a little too much. I'm willing to accept Hanks as an engineer capable of building artificial intelligence and giving it a robot body. But the movie doesn't really show him designing anything. He plugs in a chip, we see a progress bar or two, and then the robot's head starts talking.

When Finch decides it's time to leave, he just lowers the robot body suspended from chains and mentions something about it having gyros for balance. It's really cool to see him teaching Jeff to walk for the first time, but I kind of wanted to see him building the body, even in flashbacks. As it stands, Finch had a set of instant arms and legs for Jeff lying around. Just add water.

I found myself constantly wondering what powered Jeff, because we never see him charging a battery or plugged into anything. He just walks around like it's no big deal the entire film and never wears down or shows any weakness beyond his childlike innocence. It feels similar to cheating, like when the hero of an action film has nearly unlimited ammo in his gun and can just keep pulling the trigger while rarely reloading.

Fortunately, Jones' performance is so effortlessly charming that most members of the audience will probably overlook those as nitpicky details. And to be fair, the robot design is pretty cool. Jeff certainly looks a lot more realistic than any of the machines in "Real Steel," did.

This isn't the first time I've been genuinely impressed with a film from Apple TV+. "CODA" was spectacular, and I still loudly sing the praises of "Wolfwalkers." The service has some niche hits for those who just bought an iPad or iPhone and got a free year of the streaming service thrown in.

"Finch" is available for streaming today.