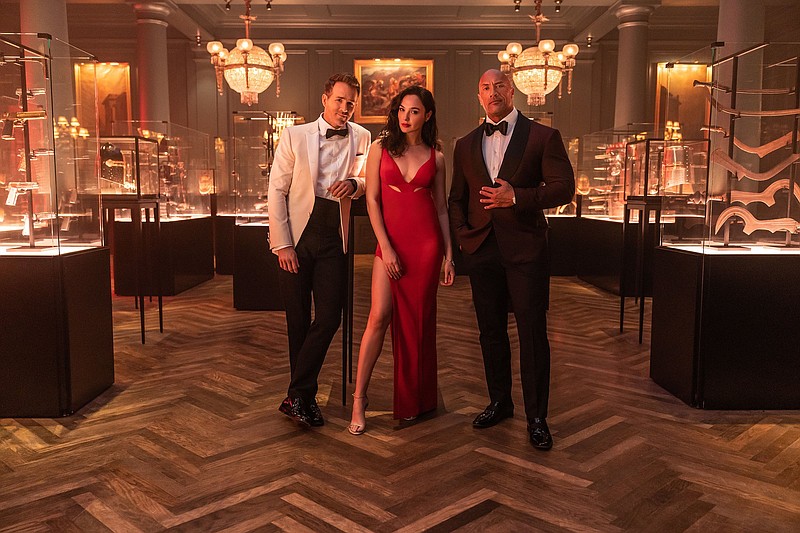 It goes without saying that Netflix has evolved into a major player in the world of movies. The Los Gatos, Calif.- based streaming service has amassed more than 50 Academy Award nominations (including five for Best Picture), and its films have won a total of 15 Oscars. But Netflix has also poured millions of dollars into developing its own line of big-budgeted blockbusters. The new poster child for that initiative is "Red Notice," a $200 million action comedy featuring three of the biggest names in Hollywood entertainment.

"Red Notice" is written and directed by Rawson Marshall Thurber ("Skyscraper," "Central Intelligence"). The film stars Dwayne Johnson, the highest paid actor in Hollywood (that's still a wild notion to digest), Gal Gadot, one of the highest paid women in Hollywood, and Ryan Reynolds, a likable schtick-driven actor with an enthusiastic following of his own. That's a lot of box office star power and securing all three for your movie is a sizable investment in itself.

Just based on the talent alone, you should have a good idea of what you're going to get from "Red Notice" -- plenty of action scenes, just as many laughs, lots of charisma and an ending that leaves the door open for a sequel if this one proves profitable. In other words, your standard blockbuster blueprint. But I don't mean that as a knock. I've always had an affection for popcorn movies when they're done well. Even when they stick close to the familiar formula.

For the most part "Red Notice" is one of the well-done ones. To its credit it knows exactly the kind of movie it wants to be, and it never deviates from that vision. That's something that proves to be a strength and a weakness. Thurber and company stick with what works and have a great time doing it. And you never have to worry about the movie taking itself seriously. But at the same time, the relentless gags and overall silliness can get a little exhausting. And those looking for even the smallest amount of dramatic tension won't find it here.

This overall fun smorgasbord of genres goes as heavy into comedy as it does action. But it also throws in some heist thriller elements and a bit of swashbuckling adventure. Johnson gets top billing playing FBI beefcake John Hartley, a seasoned profiler with the Bureau who specializes in art crime. The film opens as Hartley and Inspector Das (Ritu Arya) from Interpol arrive at Rome's renowned Museo Nazionale di Castel Sant' Angelo. Inside the museum is one of three bejeweled eggs given to Cleopatra from Mark Antony. The second egg is in a private collection in Spain and the location of the third remains a mystery.

So why is all this egg talk important? An Egyptian billionaire is offering $300 million to whoever delivers him all three eggs by his daughter's wedding day. It's an obscene amount of money that's sure to draw attention which is why Hartley is in Rome. He received a tip that renowned con artist Nolan Booth (Reynolds) is in town to swipe egg number one. But there's a third player who factors into the equation -- the sphinxlike "most wanted art thief in the world" (Gadot) who watches from afar with a ton of resources at her disposal.

Now grab a pen and paper. This fast-moving caper launches with a wild chase sequence in Rome where Booth and the egg slips through Hartley's fingers. There's a brief stop in Bali where Hartley tracks down and apprehends Booth. Then its back to Rome where Hartley discovers the egg he has retrieved is fake and he has in fact been framed for the theft by a mysterious shadowy character known as The Bishop. Hartley and Booth get shipped to a frigid Siberian prison (don't ask) where they learn the true identity of The Bishop (Gadot). You get all of that?

It may sound like I'm giving up a lot of the plot, but I'm not, really. All of that is mostly setup for this around-the-world jaunt that also makes stops in London, Egypt, and Argentina among other scenic locales. Along the way, Thurber puts together a number of high-energy set pieces including a crazy prison escape, a gag-filled fight sequence in Valencia, and a wild car chase through a mine shaft. Not every action scene works (there's an especially dumb sequence inside a Spanish bullring), but they're mostly entertaining and clearly a huge chunk of the budget went into them.

As for the three stars, each delivers exactly what you expect from them. The magnetic Johnson flexes his big muscles and his bigger personality. The playfully seductive Gadot seems to be having a blast. And the quick-witted Reynolds plays straight to type, with a joke-a-second cadence that offers up plenty of laughs while testing your endurance. Together the trio have good chemistry, riffing on a number of well-worn action movie tropes and checking all the boxes most of us look for in our popcorn escapism.

Rating: PG-13, for some sexual references, action and language