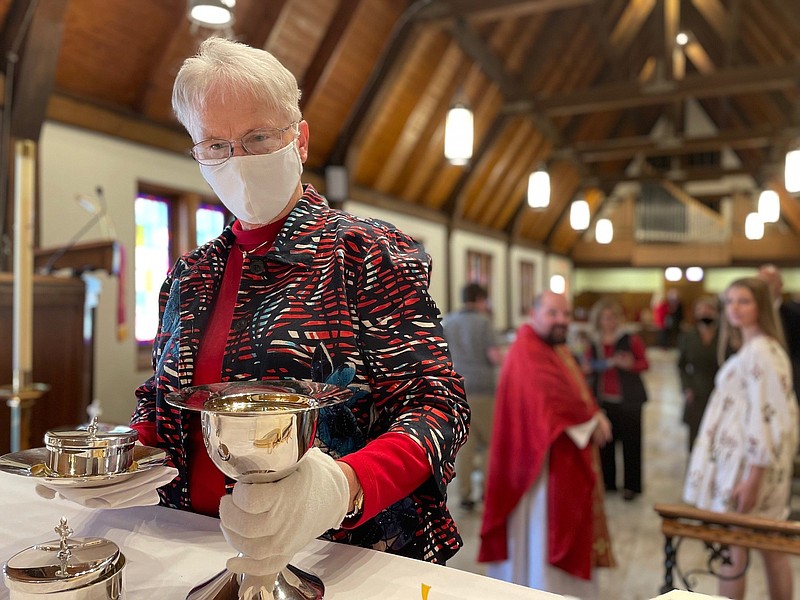 Sally McNabb tends to the altar following the worship service on Sunday at Grace Lutheran Church in Little Rock. As the result of a sanctuary remodeling project, the altar was moved closer to the people and blue carpet was replaced with white ceramic tile flooring. (Arkansas Democrat-Gazette/Frank E. Lockwood)

After meeting for months in a multi-purpose facility with basketball hoops, worshipers at Grace Lutheran Church in Little Rock returned to their newly refurbished sanctuary Sunday.

Gifts in memory of James Walter, the congregation's longtime minister, helped pay for the transformation.

Walter, who retired in May 2020 and died in December at age 67, had been "very passionate about the need for improvements," according to a summary of the project.

One year after his retirement, the sanctuary remodeling committee proposed $230,000 in enhancements.

"It's a very emotional day for a lot of people because they know that this is what he had been talking about for years," current Pastor Kent Schaaf said.

Walter's death "was a big blow to this congregation, so they decided to do this in honor of him," Schaaf said.

The longtime pastor's widow, Paula Walter, was present for Sunday's service and was pleased with the improvements.

"I think the work turned out great, and everyone who was on the committee worked really hard to to make it happen," she said. "I think the contractor did a great job."

Some of the changes are cosmetic. Ceramic tile flooring has replaced the bright blue carpeting, for example. Others are practical -- a new heating and air conditioning system and additional worship space.

In addition, the altar has been moved away from the wall and the pulpit has pivoted, enabling the preacher to see the entire congregation.

Perhaps most importantly, the step beneath the communion rail has been eliminated, removing a potential hazard for elderly congregants.

Tradition-minded members have welcomed the return.

The pipe organ, silenced for months, resounded once again, loud enough to be heard along Hillcrest Avenue.

The softer sounds of babies and small children were also present.

Roughly 160 people gathered to mark Reformation Sunday, commemorating the day Luther is said to have nailed his Ninety-five Theses to the door of the Castle Church in Wittenberg, Germany.

Luther's written denunciation of the selling of indulgences, which he also sent to the local archbishop, would eventually result in his excommunication by Pope Leo X.

Rather than recanting, Luther helped craft a Protestant, evangelical alternative to the Catholic Church.

Sunday, the congregation celebrated the 504th anniversary of Luther's historic challenge to Rome, singing "A Mighty Fortress Is Our God."

Sometimes referred to as the Battle Hymn of the Reformation, Luther wrote the words and is credited with writing the music, sometime in the 1520s.

Grace Lutheran is part of the St. Louis-based Lutheran Church-Missouri Synod, which was founded in 1847 by German immigrants.

One of the nation's dozen largest Protestant denominations, roughly half of its 1.96 million members live in six Midwestern states: Illinois, Wisconsin, Michigan, Minnesota, Missouri and Nebraska.

Grace Lutheran, which was founded in 1941, is evangelical and liturgical.

The ringing of the church bell signals that worship is about to begin.

Schaaf and many of the congregants make the sign of the cross at key points of the service.

A Bible sits atop the altar; a metal cross hangs above it and candelabras stand on either side.

The Greek letters Alpha and Omega appear on the decorative red and gold cloth draped over the pulpit, the altar and two side tables.

The Greek lettering is a nod to Revelation 22:13 -- "I am the Alpha and the Omega, the Beginning and the End, the First and the Last."

"Everything in here has a meaning. It all points to Christ," Schaaf said afterward as he stood beside the newly positioned altar.

Though many of Grace Lutheran's early members were of German ancestry, today's congregation is more diverse.

On Sunday, the parish welcomed 22-month-old Karrine Kombe Awichi into the family of faith as her father, Aminiel Kombe Awichi, and her maternal grandparents, Anthony and Geneva Tolbert, looked on.

Awichi, an immigrant from Kenya, was a Lutheran long before he came to the United States.

Two young people were also confirmed, vowing to "continue steadfast in this confession and Church and to suffer all, even death, rather than fall away from it."

From behind their covid-19 masks, the worshippers sang: "Give us lips to sing Thy glory, Tongues Thy mercy to proclaim, Throats that shout the hope that fills us, Mouths to speak Thy holy name."

During the Eucharist, churchgoers were offered individual cups or they could drink from the chalice.

"The common cup will be wiped off with a napkin that is soaked in grain alcohol, if anybody's concerned about that," Schaaf explained.

Sammye Harrill, chairman of the evangelism committee, sat in the new overflow area during Sunday morning worship. The room had previously been a gathering place for coffee and sweets.

"I like it better than I thought I would. It's awfully beautiful," she said, acknowledging she had been reluctant to overhaul a worship space she had enjoyed for two decades.

Pastor Walter was deeply loved and is greatly missed, but the congregation he left behind is kindhearted and close-knit, she said.

"That congregation kind of became our family. We've been there since 1995," she said.

Grace Lutheran was more than James Walter's place of employment; it was a source of joy.

"He loved being their pastor," Paula Walter said. 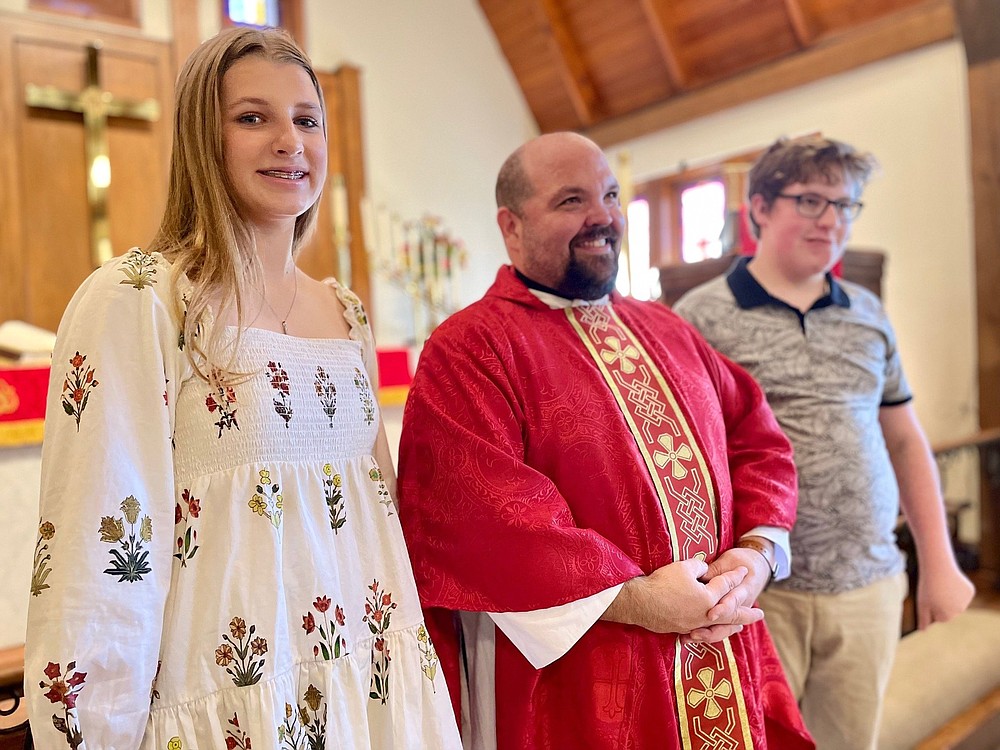 Pastor Kent Schaaf of Grace Lutheran Church in Little Rock stands with Emma Schnackenberg of Little Rock and Isaac Goodrich of Conway on the day of their confirmation. The two catechumens Sunday renounced the devil, affirmed the Apostle’s Creed and promised “to live according to the Word of God.”