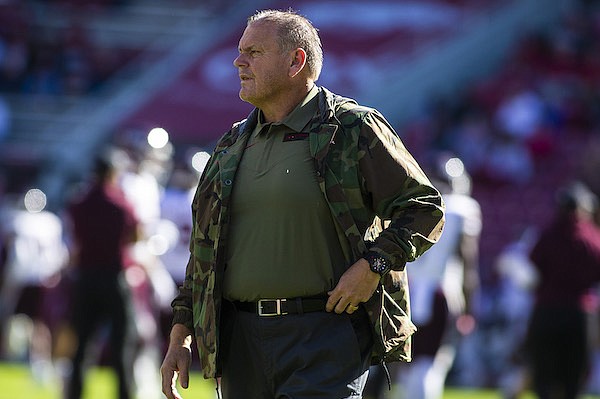 Arkansas coach Sam Pittman is shown prior to a game a game against Mississippi State on Saturday, Nov. 6, 2021, in Fayetteville.

For winning six games, Pittman’s annual pay will be increased by $250,000 to $3.25 million, according to terms of his contract. It is the first pay raise for Pittman since he was hired in December 2019.

In addition to the pay raise, Pittman will receive a one-time bonus of at least $100,000 for leading the Razorbacks to a bowl game. He would receive a $150,000 bonus if Arkansas plays in one of the SEC’s “group of six” bowls, which include the Outback, Gator, Music City, Duke's Mayo, Texas and Liberty bowls.

In May, Arkansas athletics director Hunter Yurachek said he and Pittman agreed to a one-year extension of Pittman’s contract through the 2025 season. At the time, Yurachek said he thought an extension was warranted because his first year as coach was disrupted by a covid-19 shutdown.

Pittman’s salary is the 12th highest among 13 SEC coaches at public schools, according to a USA Today database updated last month. Pittman was hired at a lower salary than the Razorbacks paid their three previous head coaches — Bobby Petrino, Bret Bielema and Chad Morris — due to his lack of head coaching experience.

South Carolina coach Shane Beamer has the league’s lowest salary at a public school, $2.75 million, and Tennessee’s Josh Heupel and Missouri’s Eli Drinkwitz are tied for the 10th-highest salary at a public school at $4 million. The salary for Vanderbilt coach Clark Lea was not included in the USA Today database because he coaches at a private school.

Pittman is 9-10 as Arkansas’ coach, including 6-3 this season. The Razorbacks have qualified for a bowl game in both seasons, including last year when minimum-win requirements were waived due to covid-19.

Arkansas’ game against TCU in the Texas Bowl was canceled last year due to virus protocols at TCU.