At full strength: UA to open with revamped lineup 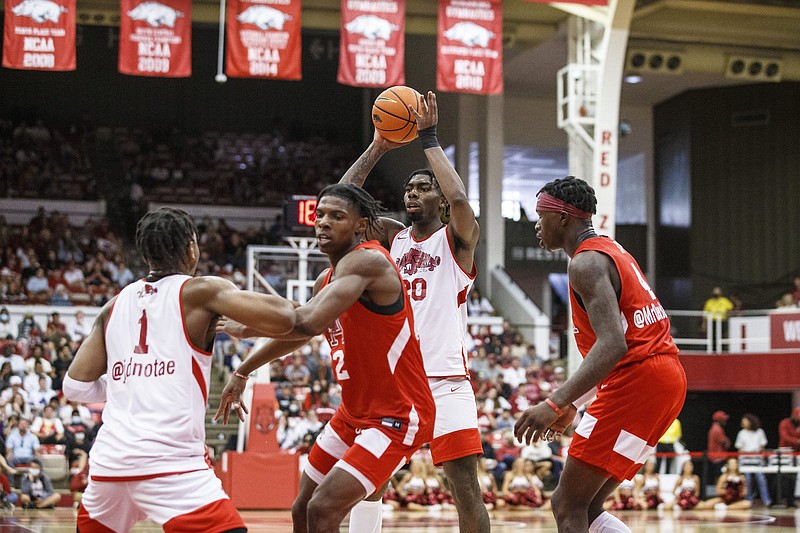 Arkansas Junior Kamani Johnson (20) with the ball on Sunday, Oct. 17, 2021, during the second half of play at Barnhill Arena, Fayetteville. Visit nwaonline.com/211018Daily/ for today's photo gallery..(Special to the NWA Democrat-Gazette/David Beach)

The University of Arkansas men's basketball program begins its 99th season -- and third under Coach Eric Musselman -- at 7 p.m.

"I think Coach Muss has done a good job testing us mentally strength-wise and our physicality," said Johnson, a 6-7 junior who redshirted last season after transferring from the University of Arkansas at Little Rock. "We heard the noise from the exhibition games from everybody, so I think we're going to try to shut up the noise and show what we can do at full capacity."

The No. 16 Razorbacks had players sit out because of injuries in both of their exhibition games when they beat East Central (Okla.) University 77-74 and North Texas 68-60.

Johnson missed both exhibitions because of a wrist injury; senior forward Trey Wade, a transfer from Wichita State, missed the East Central game recovering from a knee injury; and sophomore forward Jaylin Williams didn't play against North Texas because of back spasms.

"I think the guys are excited to play," Musselman said. "We're healthier than we've been in the last two months, so that's a positive that we do have the injured guys back in the fold."

Johnson and Wade are among seven newcomers for the Razorbacks, who finished 25-7 last season and advanced to the NCAA Tournament Elite Eight for the first time since 1995 before losing to eventual national champion Baylor 81-72.

"A work in progress," Musselman said of his roster. "It's an easy group to coach, but there are a lot of unknowns once the game hits."

Musselman is still trying to figure out the team's best options at point guard and how to have better ball movement after the Razorbacks combined for 19 assists and 24 turnovers in the exhibition games.

"We know that all three of those guys can create shots for themselves and, quite frankly, all three of them can create their own shot almost as well as anybody in college basketball," Musselman said. "But now it's can you create a shot for a teammate? That's where we're at right now."

Senior transfers Stanley Umude (from South Dakota) and Au'Diese Toney (from Pittsburgh) are both 6-6 and listed as guards, but they could play forward if Musselman decides to go with a smaller lineup.

The 6-10 Williams, 7-3 Vanover, 6-6 Wade and Johnson can be part of a bigger lineup if Musselman wants to go that way after North Texas outrebounded Arkansas 42-28.

"We've got that foundation down low and it's going to be good for our team," Wade said. "We'll be a lot more physical out there and hopefully that helps our rebound matters."

Musselman said the Bears will push the pace when fast break opportunities are there, but that they also can play slow things down.

"They do a lot of good offensive movement spacing-wise, and you're going to have to guard an entire shot clock," he said. "You can't over-gamble. You've got to be solid against their precision."

No Razorback is probably more anxious to play than Johnson after he missed all of last season, then the two exhibition games.

"I couldn't even put it into words how excited I am to step on the court and finally be a part of what it is to be an Arkansas Razorback," Johnson said. "Last year, it was pretty tough, but I had a lot of friends that helped me through it.

"There's always light at the end of the tunnel and we've finally reached the light."