Orgeron: Tigers are continuing to fight 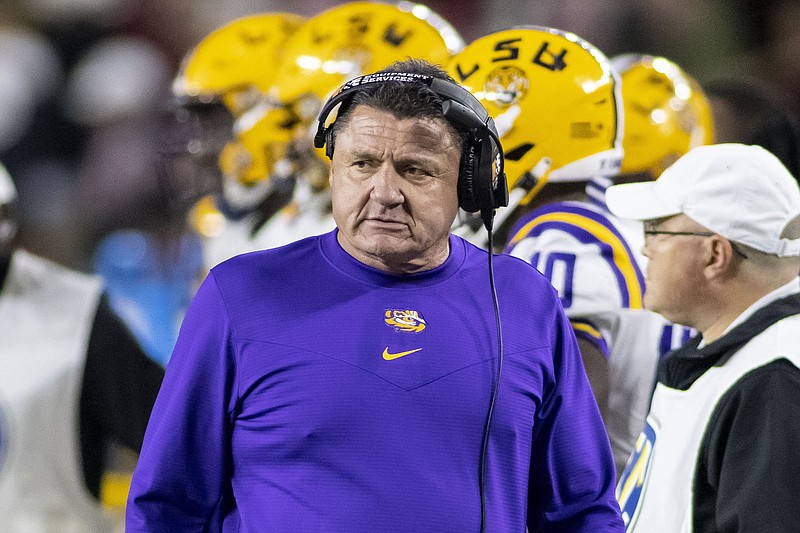 LSU head coach Ed Orgeron paces the sidelines during the second half of an NCAA college football game against Alabama, Saturday, Nov. 6, 2021, in Tuscaloosa, Ala. (AP Photo/Vasha Hunt)

FAYETTEVILLE -- The list of FBS head coaches fired this season grew to eight when Massachusetts announced Sunday it was parting ways with Walt Bell -- a former Arkansas State University offensive coordinator -- after Rhode Island beat the Minutemen 35-23 to drop his record to 2-23.

Seven of the coaches losing their jobs were replaced by interim coaches.

Only Ed Orgeron at LSU is continuing to coach his team after it was announced seven games into the season that he won't return in 2022.

The Tigers (4-5, 2-4 SEC) lost 31-17 at Ole Miss in their first game since the announcement of Orgeron's firing, but they pushed Alabama to the limit before losing 20-14 at Bryant-Denny Stadium last week.

LSU will try for its first victory since Orgeron's firing when it plays the University of Arkansas (5-3, 2-3) at 6:30 p.m. Saturday at Tiger Stadium.

"I knew we had to sustain that momentum and sustain that standard," Orgeron said Oct. 17 when his firing became official the day after the Tigers beat Florida 49-42. "And I know that in the last two years it hasn't been the standard of LSU."

Playing Alabama so competitively had Oregon expressing confidence at his Monday news conference.

"I feel good about the mindset of the team," Orgeron said. "I told them, 'You play like this, we may win the rest of our games and go to a bowl.'

"Not only does the record mean a lot, but these guys are playing to go to the NFL. They want to have a good showing."

Orgeron, a graduate assistant strength coach for the Razorbacks in 1986-87, has said he wants to coach the Tigers in a bowl game if they qualify, and that he is continuing to recruit for LSU.

Arkansas is the first of three consecutive home games for LSU along with Louisiana-Monroe and Texas A&M.

Orgeron, 60, has said he plans to sit out next season to spend more time with his children, but he didn't rule out a return to coaching. LSU has agreed to pay him a $16.9 million buyout settlement with final payment in 2025.

"I'm going to enjoy all these three weeks, every day love coaching for the Tigers," Orgeron said. "I think when you have proper leadership, this team is going to finish strong."

The Crimson Tide had 6 rushing yards, including 45 in losses resulting from 4 sacks. It matched the lowest rushing yards ever for Alabama, which was also held to 6 in a 9-0 loss to Penn State in 1990.

The Tigers drove to the Alabama 7, 41 and 30 in the fourth quarter while trailing 20-14, but were stopped each time.

"We should have played like this every single week," said Johnson, whose pass on the final play was broken up in the end zone. "To be in the spot we're in is kind of frustrating."

Arkansas Coach Sam Pittman said he was impressed with how the Tigers played at Alabama.

"LSU, I believe, played as physical and as hard as they have all year last week," Pittman said. "Coach Orgeron certainly has the team still.

"They're very, very talented. They're LSU. From what I saw on film compared to the other weeks, they've always played hard. But I thought they played extremely well and physical Saturday against Bama."

LSU, which had an open date before playing the Tide, broke out some new blitzes and became the first opponent in 35 games to hold Alabama to less than 30 points.

Tigers linebacker Damone Clark had 11 tackles, including a sack for a 10-yard loss, to give him 106 for the season.

"We weren't playing the run very well out of base 4-3 defense and we wanted to give different looks," Orgeron said. "We stemmed out of a 3-4 look many times, which they weren't ready for.

"We're going to continue to expound on our blitz package and see where it takes us."

Orgeron was asked what qualifying for a bowl game would mean to the Tigers.

"It would mean a lot and it starts with Arkansas," he said. "I think these guys want to keep on playing.