Bulldogs in search of kicker 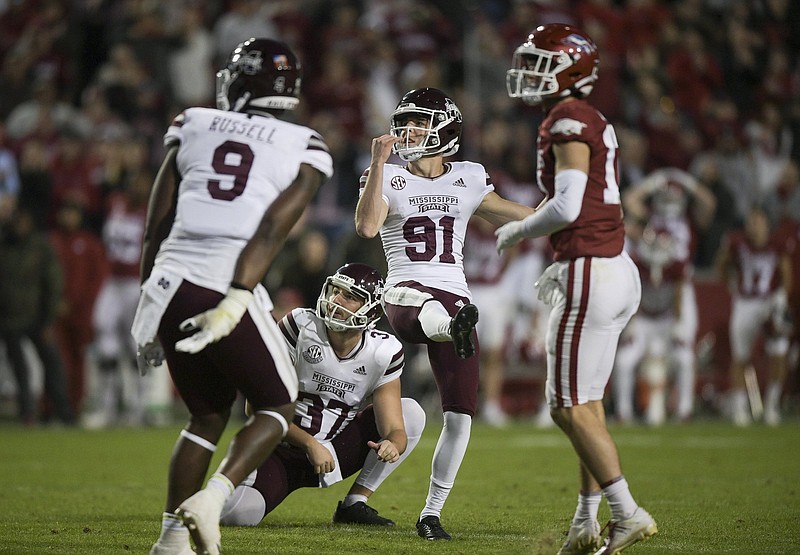 “The thing is, there’s a ball, and you kick it, and it really doesn’t matter if a bunch of 7-year-olds are watching or if five million Mongol warriors on horses getting ready to shoot their bows and arrows at you,” Leach said Monday at his weekly press conference. “Because, I mean, you approach the ball and kick it.

Despite what Leach said, he knows it’s not easy for kickers to make field goals even at the SEC level, as the Bulldogs demonstrated last week in their 31-28 loss at Arkansas.

Ruiz, senior transfer from Arizona State, missed from 23 and 46 yards.

Leach then had McCord, a redshirt freshman, attempt two extra points, and he hit both.

McCord then missed a 40-yard field goal attempt on the final play that allowed the Razorbacks to hold on for the victory rather than have to play overtime.

The misses dropped Mississippi State to 9 of 17 on field goal attempts this season, including 1 of 7 from beyond 40 yards.

After the game, Leach said the Bulldogs would hold open tryouts for kickers back on campus, and it wasn’t something said only in frustration after a tough loss.

Leach said Wednesday that about 40 students expressed interest in trying out to be Mississippi State’s kicker.

The hopeful kickers haven’t yet gone through tryouts, Leach said, because paperwork needs to be finalized to make sure they’re all academically eligible under NCAA rules.

“We’ve got to get their paperwork and all that stuff,” Leach said. “They have to be approved.

“We haven’t seen any of them [kick] yet. I’m sure they’ll come in all shapes and sizes.”

Leach said he hopes to hold tryouts next week.

“We want to have a pile of kickers that are available that we cultivate, develop,” Leach said. “Over the years, most of my kickers have been walk-on guys that have developed and improved to the point where they become the starting kicker.”

Leach said a decision will be made later this week who will handle field goals against Auburn on Saturday, but it sounds like it will be Ruiz or McCord with the tryouts for new candidates still on hold.

“You just keep working,” Leach said of what can be done to improve the kicking. “Go back to square one as far as the drills.”

Grantham was in his fifth season as Mullen’s defensive coordinator, first at Mississippi State, then at Florida. Hevesy was in his 13th season as an assistant for Mullen.

“I’m a pretty loyal person,” Mullen said. “I’m not going to jump to any conclusion. The first sign of trouble, I’m not going to abandon ship on anything. I’m going to look at everything. Honestly, probably a knock sometimes.”

Mullen said he has tremendous respect for Grantham and Hevesy, but that he felt now was the time to make changes on his staff, especially with the early signing period in December.

“Those guys are both friends of mine,” Mullen said. “But my responsibility as the head coach is to do what I feel is best for the Florida Gators, and that comes above it all.

“We’re one of the top rushing teams in the country — we just haven’t been consistent with John and the offensive line.”

Linebackers coach Christian Robinson, who played for Grantham at Georgia, never has called plays, but he’ll begin doing that for Saturday’s game against Samford.

“This is Florida,” he said. “So there’s a long list of people that want any job they can get at the University of Florida in any aspect.”

The Vols won despite having possession for 13 minutes and 52 seconds compared to 46:08 for the Wildcats.

Kentucky ran 99 plays to 47 for Tennessee.

“I’ve never been a part of a game with that little time of possession and the success that we had,” Vols Coach Josh Heupel said. “It was just unique the way the game unfolded.”

The Vols also scored on a 37-yard run and 56-yard interception return.

“Even in today’s football that’s definitely a rare occurrence,” Kentucky Coach Mark Stoops said of his team controlling the ball for more than 46 minutes and losing. “I think when you’re playing a team like an Ole Miss or Tennessee, time of possession is not that big of a factor if you’re not getting stops.

“We certainly gave up way too many explosive plays.”

The longest streak ever for a college football team to score 30 or more points ended at 34 games when Alabama beat LSU 20-14.

It was the first time the Crimson Tide failed to score at least 30 points since they lost to Clemson 44-16 in the College Football Playoff championship game on Jan. 7, 2019.

Big 0 for the offense

Neither team scored an offensive touchdown in Texas A&M’s 20-3 victory over Auburn.

Auburn was held to its fewest points since being shut out by Alabama 49-0 in 2012.

“A lot of prospects that weren’t at the game, I had text messages from right afterwards,” Beamer said. “And then frankly, some guys early in the season that I couldn’t get them to return a text, or answer a phone call … some of those guys are showing some interest.”

Hooker, a graduate transfer from Virginia Tech, is providing the Vols with their best play at quarterback since 2016 when Josh Dobbs was leading the offense.

Hooker was the SEC offensive player of the week last week when he completed 15 of 20 passes for 316 yards and added 41 rushing yards to lead Tennessee to a 45-42 victory at Kentucky.

It’s unlikely Hooker — or any other quarterback — can play well enough against Georgia’s dominating defense to pull an upset, but he gives the Vols a fighting chance for Saturday’s game at Neyland Stadium.

Four of Hooker’s touchdown passes have gone for 70 or more yards.

The Aggies and Rebels will play for the first time since Texas A&M beat Ole Miss 24-17 in 2019 after last season’s matchup was postponed twice because of covid-19 outbreaks and eventually cancelled.

Texas A&M is looking to extend its winning streak to five games and stay within striking distance of Alabama in the SEC West race.

Because the Aggies beat Alabama, they can still win the SEC West title if they win out and Alabama loses one of its remaining SEC games at home against Arkansas or at Auburn.

The Rebels last beat the Aggies on the field 29-28 in 2016. Ole Miss later vacated the victory because of NCAA sanctions.

New Mexico State at No. 2 Alabama

Mississippi State at No. 17 Auburn

No. 1 Georgia at Tennessee

51 1/2 — Points Alabama is favored by against New Mexico State.

0.56 — Sacks allowed per game average by Georgia. The Bulldogs’ opponents have 5 sacks in 9 games.

“It’s nice to do a halftime interview when we’re winning. I haven’t done one of those in a while.”

South Carolina Coach Shane Beamer to SEC Network reporter Alyssa Lang with the Gamecocks leading 30-10 in what became a 40-17 victory over Florida.

“I don’t even know why I turn in plays anymore. It certainly doesn’t matter. I don’t think I will from now on.”

Kentucky Coach Mark Stoops when asked on the SEC coaches’ teleconference if had turned any video of plays involving questionable officiating calls to the conference office.

“I think New Mexico State is a dangerous team because they’re one of these teams that are going to pass the ball.”

Alabama Coach Nick Saban on the 1-8 Aggies, who are 23rd nationally in pass offense at 278.4 per game.

“He grew up a competitor down in South Georgia, and he’s kind of been overcoming the odds I feel like for his whole career. He’s played with a chip on his shoulder.” 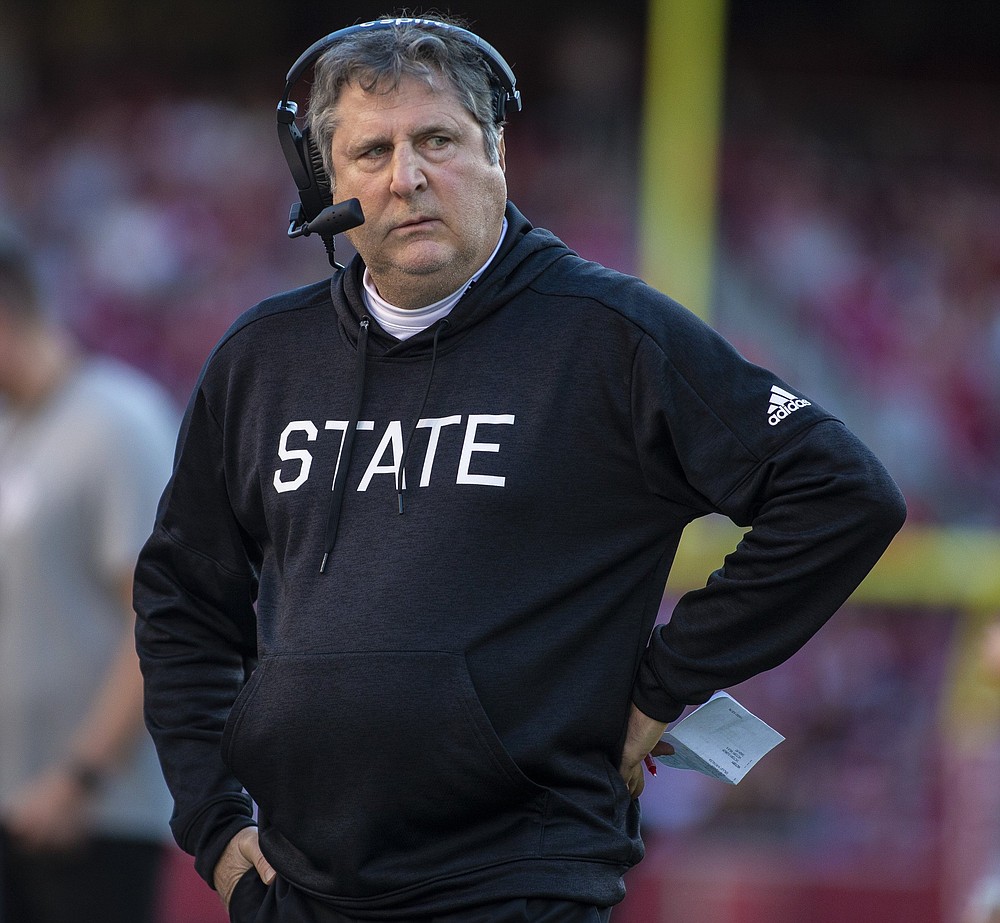 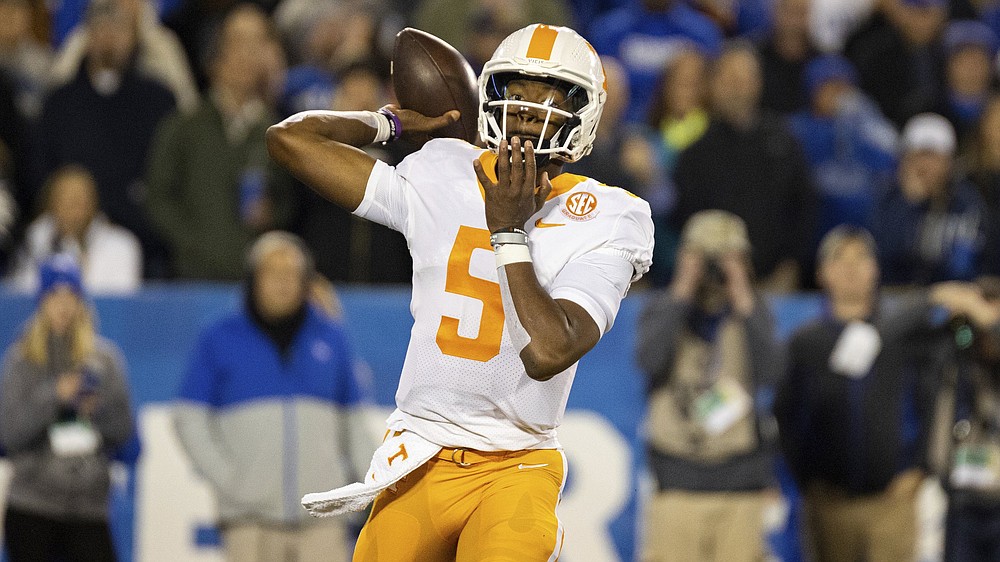 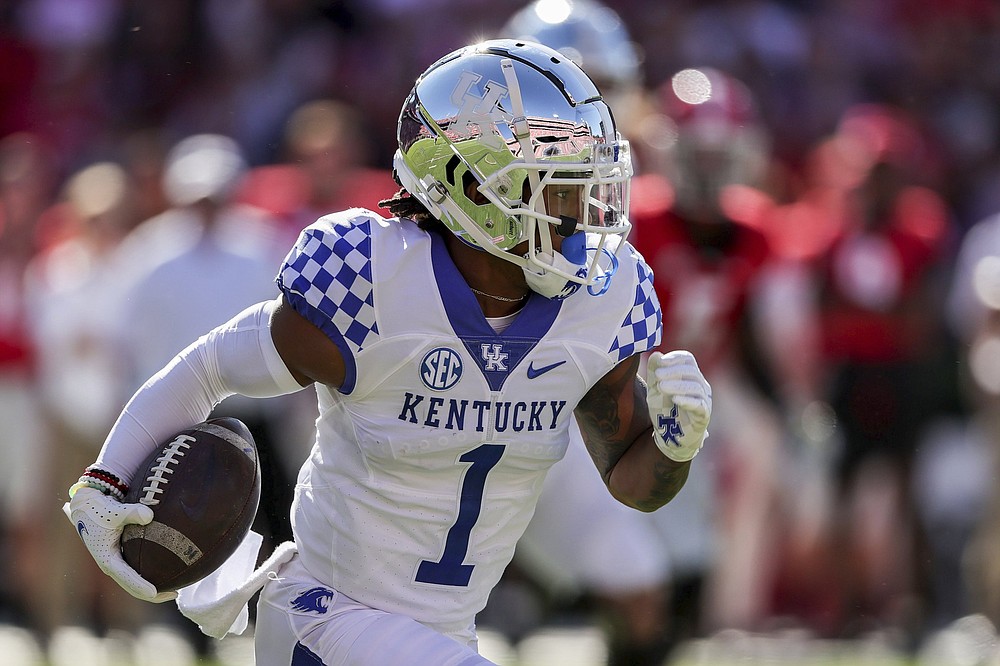