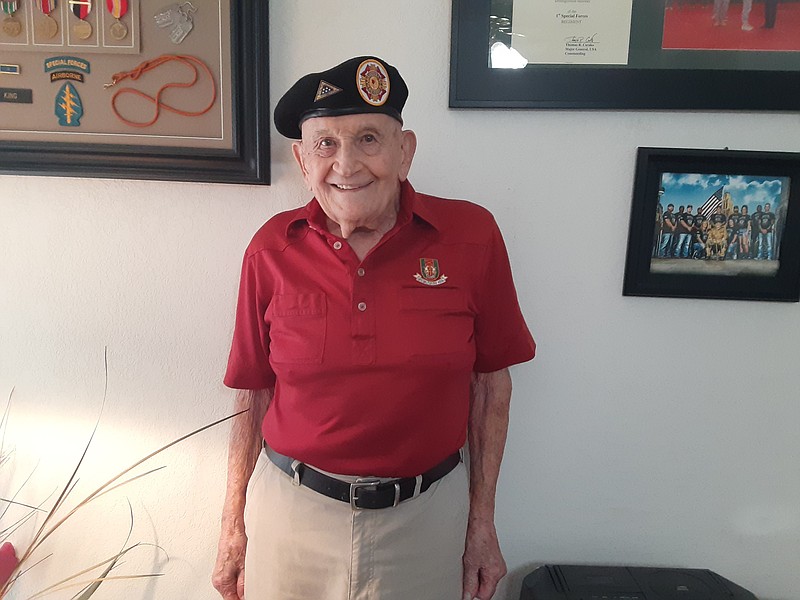 U.S. Army veteran Ralph King, 97, poses in this undated photo. King was a member of the 101st Airborne during World War II, seeing combat in the Netherlands during Operation Market Garden and in the Battle of the Bulge in Belgium. (Arkansas Democrat-Gazette/Neal Earley)

HOT SPRINGS -- When Ralph King raised his right hand to enlist, he wasn't sure exactly what he was volunteering to do.

Just out of high school, King and several of his friends had been "chomping at the bits" to enlist in the U.S. Marines Corps but were turned away by recruiting officers who told them there wasn't room for them.

Eager to enlist, King and his friends sought out the local draft board, which told him to seek enlistment at a base in Nebraska.

Not knowing exactly whether he would get the chance to join the Marines, at the base King was herded into a crowded gymnasium full of draftees where he was asked to raise his hand to swear an oath.

After doing so, King was welcomed into the U.S. Army.

"They didn't even know if we raised our hand or repeated the oath," he said of the men who swore them in.

King, 97, served 21 years in the military, earning a Purple Heart and a Bronze Star. Today he will lead the Veterans Day parade in Hot Springs.

King's Army career has taken him from the cold, dense forests around Bastogne to the jungles of Laos. He forged a pioneering path in the Army, first as a paratrooper and then as a member among the first special forces units, serving at the height of the Cold War.

King still keeps his discharge papers, personal statements and photos in a red binder. They include a signed letter from President Harry Truman, a document showing he had top-secret security clearance, and his orders to move to Laos as the United States ramped up its involvement in Vietnam.

Originally from Dowling, S.D., King assumed he'd spend his life as a farmer. He had worked in the wheat fields in North Dakota and the lead and zinc mines near Deadwood, S.D.

But after Japan launched its attack on Pearl Harbor on Dec. 7, 1941, King became eager to enlist.

After basic training, the Army sent him to tank school given his experience working with tractors and combines. But he was dropped from his unit for what he believed to be a mild case of measles.

He rejoined another tank unit, but King had second thoughts about being a tanker, given the poor quality of American Sherman tanks and the high-powered guns German Tiger tanks had. Instead, he decided to transfer to the airborne.

"I think you got a better chance if you surprise [the enemy], which it was in Holland where I jumped," King said.

King was assigned to the 101st Airborne, 506th Regiment, H Company and arrived in the United Kingdom on D-Day.

His first time in combat wouldn't come until September 1944 when he dropped into Nazi-occupied Netherlands as a part of Operation Market Garden, an allied plan to outmaneuver German defenses in an effort to quickly end the war.

During the fighting around Eindhoven, King was wounded by shrapnel from a German tank shell. The explosion left him with a small wound in his wrist, holes in his field jacket and in the shrapnel stock of his M1 Garand rifle. The shell killed three men from another platoon who were next to King.

"I didn't even know I was hit until at night [when] I started digging in and my wrist was getting stiff," King said.

King was sent back to England for medical treatment but returned to his unit in Europe weeks later, just in time for arguably the 101st Airborne's most famous battle.

Not knowing of a surprise German offensive, King had been out drinking the night before he was ordered to Bastogne. Drunk on champagne, he said he went to bed in military dress clothes only to be awoken around 4 a.m. with orders to move to the Belgian city of Bastogne.

On Dec. 16, 1944, the Germans launched an offensive as a desperate last attempt to gain momentum in the west.

The 101st Airborne was ordered to move to Bastogne, which sat along a critical road junction that would have been a prime thoroughfare for German tanks. King's unit had been ordered to attack the village of Foy but was ordered to retreat back to the American lines.

While laying a small trench, King heard an incoming German shell and took cover. A piece of shrapnel hit his shoulder, wounding him.

Wounded men like King could not be evacuated but instead were sent to a makeshift hospital. The airborne medical company had been captured, so medics had to make do with what little supplies they had to treat the wounded.

"We had morphine syrettes in all of our helmets, so we had plenty of pain medication," King said. "So that's what we lived on -- and soup."

After the war, King returned to the United States, settling in Gary, Ind., but he had trouble finding work. So he decided to re-enlist in the Army and was assigned to the 82nd Airborne Division.

When the Green Berets were formed in 1953, he was among the first to volunteer. King's time as a member of the elite unit would take him from near the Iron Curtain in Europe to Laos and the Panama Canal Zone.

As a member of the Special Forces, he went through some of the most elite training the Army offered and was prepared to fight a guerrilla war in Germany had the Cold War with the Soviet Union ever turned hot.

"It was a good life," King said about life in the Army. "It wasn't too hard soldiering back then, right after the war."

After 21 years in the Army, King retired in 1964 as a command sergeant major. He then moved to Hot Springs where his parents lived and worked at the post office.

Since leaving the service, he has taken part in many charity events to raise awareness for veterans' issues.

King is active in the Hot Springs-based Post 2278 of Veterans of Foreign Wars, where he serves as a member of the honor guard. He lives on his own and still drives, although sometimes he complains about his car insurance rates.

Print Headline: Figured to farm; war got in way