Davis puts up 0's for Hogs in opener 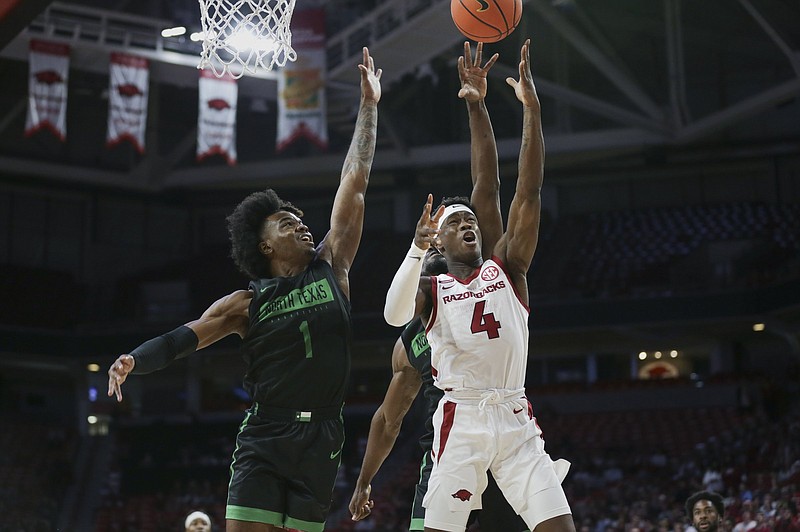 Arkansas sophomore guard Davonte Davis (4), shown during an exhibition game on Oct. 30, was one of the Razorbacks’ top weapons during their NCAA Tournament run last season. However, during their season-opening victory over Mercer on Wednesday, he did not attempt a shot or free throw. (NWA Democrat-Gazette/Charlie Kaijo)

FAYETTEVILLE -- The Arkansas Razorbacks attempted a combined 77 field goals and free throws in their 74-61 victory over Mercer in Tuesday night's season opener.

Shockingly, none were by Davonte "Devo" Davis.

Not a field goal attempt, not a free throw, for the 6-4 sophomore guard from Jacksonville who averaged 14.2 points in four NCAA Tournament games last season to help fuel the University of Arkansas' first run to the Elite Eight since 1995.

Arkansas has seven newcomers, including senior transfers Au'Diese Toney and Chris Lykes, who scored 18 and 16 points, respectively, in their debuts as Razorbacks.

"We're still trying to figure out who we are," Arkansas Coach Eric Musselman said.

Davis took at least one shot in all 30 games he played last season, and he averaged 7.6 field goal attempts. In the NCAA Tournament, he hit 27 of 52 shots.

Davis, who averaged 8.5 points last season, is the Razorbacks' second-leading returning scorer after Notae (12.8). He had 20 points against East Central (Okla.) University and 7 against North Texas in their exhibition games while hitting 11 of 23 and shots and 4 of 4 free throws.

"We want Devo to look to score the ball," Musselman said. "I thought that last year, he was in a lot of situations where there were broken plays or the play had broken down, and Devo just created and rose up over people and made a lot of mid-range shots and took the ball coast-to-coast and made some spectacular finishes.

"So we certainly want that to be the case again and we want him to grow off what he was last year offensively."

Part of the reason Davis didn't attempt a shot or drew a foul was that he had five turnovers, matching his career high at South Carolina last season.

The Razorbacks, who had 15 turnovers against Mercer, hit 26 of 55 shots.

"If we took care of the ball, we'd have some more shot attempts," Musselman said.

While Davis didn't attempt a shot, he had 4 rebounds, 3 steals and 1 assist.

"Defensively, I don't think anybody could have played better than Devo did," Musselman said.

Alvarez, who averaged 13.3 points last season, hit 4 of 13 shots against the Razorbacks, was 0 of 6 on three-pointers and finished with 8 points -- including a three-point play with 11 seconds left with Davis out of the game -- in 32 points.

"Devo did an incredible job guarding Alvarez, a first-team all-league player [in the Southern Conference]," Musselman said. "There were only 10 players in their league that were all-league players.

"Devo was on him most of the game ... and he was really held in check with six points through 31 minutes."

Musselman said Davis likely will play more point guard in Saturday's game against Gardner-Webb after he split minutes at the point, shooting guard and small forward against Mercer.

"First two exhibition games, he was exclusively at the point guard position," Musselman said. "That's still a position that we want to try to find some consistency and try to find someone who is comfortable there.

"JD, I mean, you take that many shots, I'm not sure we can call you a point guard."

The Razorbacks were a plus-19 against Mercer with Davis on the floor, even though he didn't score. 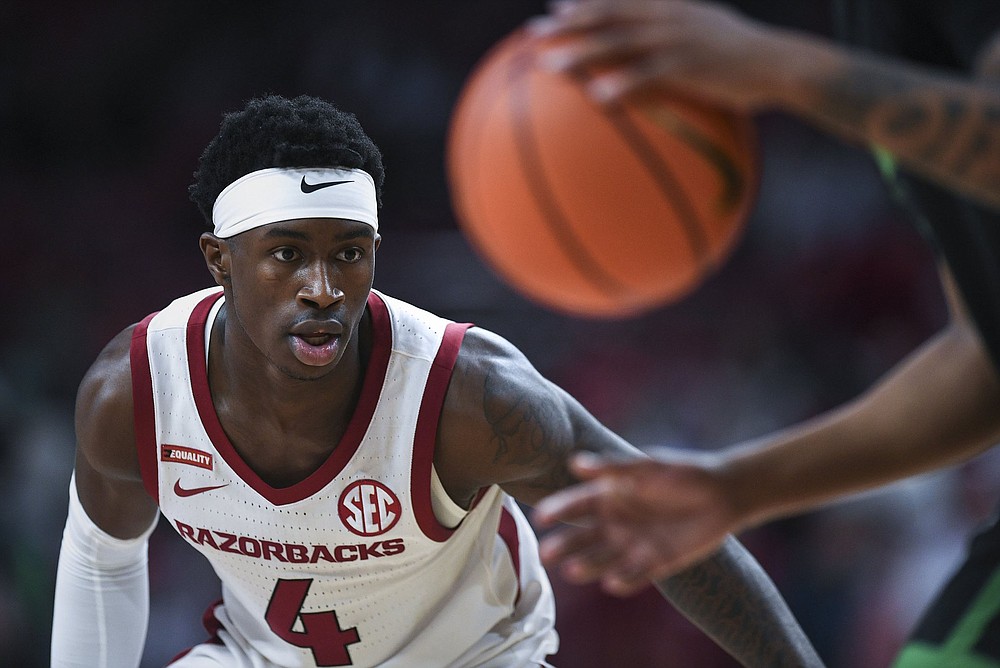 University of Arkansas guard Davonte Davis’ 34 minutes against Mercer were the most a Razorback has played in the past 25 years without attempting a shot or free throw, according to Hogstats.com. (NWA Democrat-Gazette/Charlie Kaijo)
ADVERTISEMENT