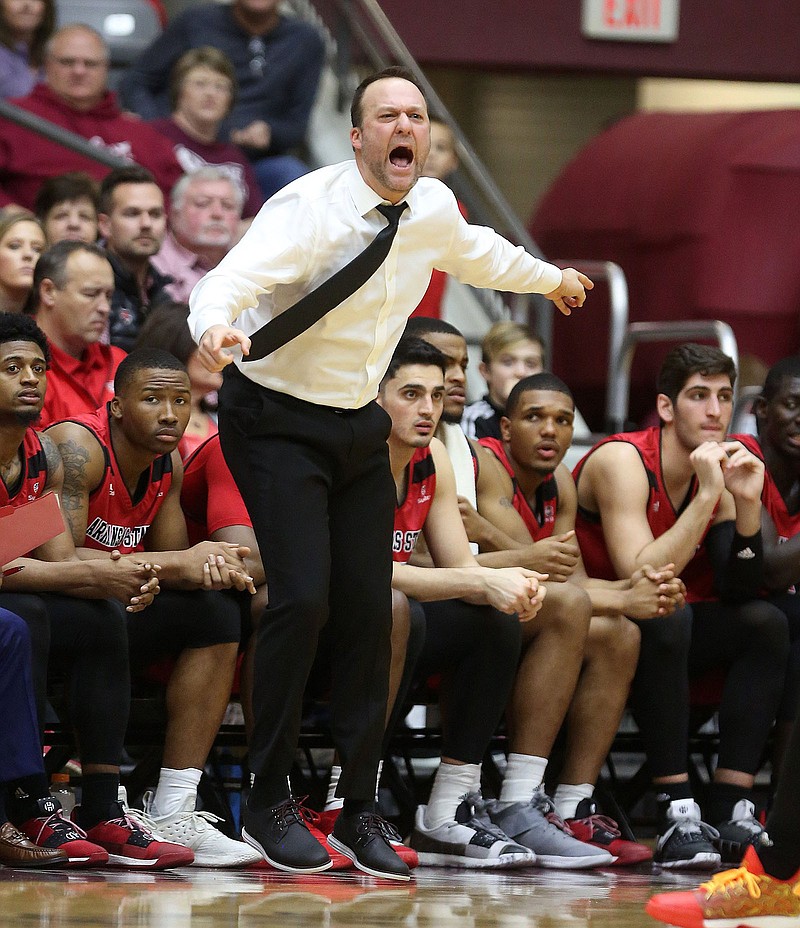 Arkansas State at No. 11 Illinois

CHALK TALK Illinois Coach Brad Underwood said Thursday afternoon that star guards Andre Curbelo (concussion) and Trent Frazier (shoulder) will be game-time decisions. … ASU is 2-32 all-time against teams ranked in the AP top 25. … The Fighting Illini will be without 7-0 junior and preseason first-team All-American Kofi Cockburn after he was suspended three games for selling school-issued apparel prior to current NIL rules going into effect July 1.

Mike Balado wasn't thinking he'd have to deal with preseason All-American Kofi Cockburn when he and Illinois Coach Brad Underwood scheduled a matchup between their respective teams this summer.

The 7-0, 285-pound Cockburn, at the time, was pondering whether he'd stay in the NBA Draft or transfer. Then the standout center opted to return to the No. 11 Fighting Illini.

Balado figured it could only help his own star big man, Sun Belt Conference Preseason Player of the Year Norchad Omier, to manage the early-season test Cockburn would present.

Funny how things work themselves out.

Arkansas State will meet a shorthanded Illinois side tonight in Champaign, Ill. after Cockburn was suspended by the NCAA for the first three games of the season last week. The first-team All-Big Ten honoree sold school-issued gear prior to the introduction of name, image and likeness regulations as he didn't anticipate returning to the Fighting Illini.

"I really wanted this game for people nationally to start recognizing guys like Desi [Sills] and Norchad," Balado told the Arkansas Democrat-Gazette. "Does it give us a better chance to win when their best player is not playing? Yes. ... Do I wish [Cockburn] was playing? Yes, because I like to play teams when they're at their best."

The Red Wolves have limited opportunities to go against high-level opponents this season. Prior to conference play, they'll face just two teams inside the KenPom.com top 150 -- the Fighting Illini and Texas Tech, who ASU will visit Dec. 14.

If the Red Wolves want to draw eyes, they need to show why they believe they make a significant improvement. ASU hasn't finished in the top half of its league since 2016-17, and its best finish under Balado was last year when it went 6-7, merely good enough for 7th place.

That's something that isn't just important to the Red Wolves' coach. Junior guard Desi Sills, who dropped a game-high 21 points in ASU's 81-55 victory over Harding Tuesday, returned to his hometown after two years at Arkansas with a specific goal of putting the Red Wolves back on the map.

"We aren't backing down from anybody," Sills said. "We don't care what number you have in front of your name. We've got to compete at the highest level and try to knock them off.

"I don't mean any disrespect, but if we play the way we did [against Harding], we'll give them a run for their money."

Whether or not either Curbelo or Frazier suits up, Illinois has more than enough talent in the backcourt. Senior Da'Monte Williams shot better than 50% from distance last season, grad transfer Alfonso Plummer put up 13.6 points per game at Utah a year ago and graduate student Jacob Grandison scored an Illinois career-high 20 points earlier this week.

If the Fighting Illini's star guards join the fray as well, the hosts could cause major headaches for Sills, Marquis Eaton, and Caleb Fields.

It's why Balado doesn't want to approach this game any differently. As much as dealing with an elite team just a few days into the season can be a learning opportunity for a mid-major side like ASU, he hopes that regardless of the result on the scoreboard, there's a chance for college basketball fans to learn about this group of Red Wolves.

"We play fast, we push the ball, we play at a high speed, and we're not going to adjust that because we're playing a bigger team on the road," Balado said. "When people leave and turn off their TVs, they're going to say Arkansas State's a hard-playing team that's very sound offensively and plays an exciting style."