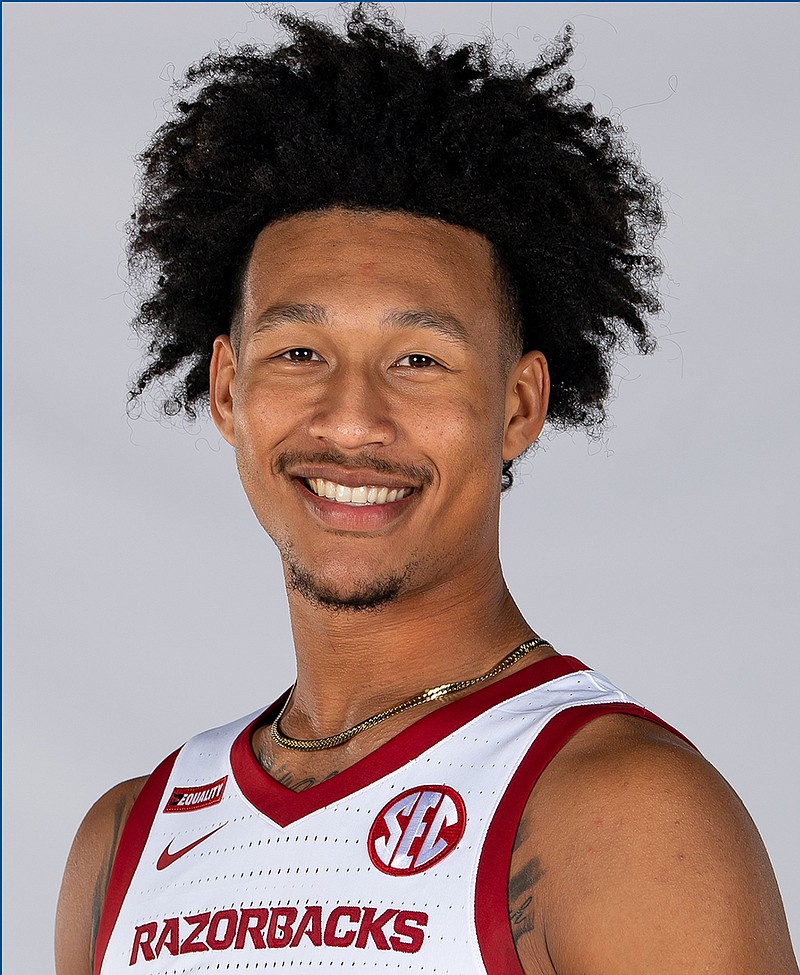 FAYETTEVILLE -- University of Arkansas Coach Eric Musselman said he's not sure about the Razorbacks' starting lineup for today's game against Gardner-Webb except for one thing.

Jaylin Williams will be in it.

"He's going to start, I can tell you that," Musselman said after No. 16 Arkansas beat Mercer 74-61 on Tuesday night to open the season. "I don't know who else is, but I know he's going to start."

Williams, a 6-10 sophomore from Fort Smith Northside, started the Razorbacks' final three NCAA Tournament games last season, and Musselman said he would have started against Mercer except for missing some practices because of back spasms.

"When we started our prep, he was still injured," Musselman said.

With Arkansas falling behind Mercer by 10 points in the first half and trailing 54-53 with less than 10 minutes left, Williams played starter minutes with 30 off the bench.

Musselman couldn't afford to give Williams much rest after he initially entered the game with 17:07 left because he was so productive as a passer and rebounder and on defense.

"I can't play him at the point [guard spot], but we need his passing. He's a willing passer. He's got great vision."

Arkansas had 13 assists on 26 baskets with 15 turnovers.

Senior guard JD Notae, who led the Razorbacks with 30 points, and 6-6 Au'Diese Toney, a senior graduate transfer from Pittsburgh who had 18 points and 11 rebounds, were second on the team in assists with two each.

Toney had a dunk and two layups on assists from Williams, who also assisted on a three-pointer by Notate and dunk by Stanley Umude.

"Jaylin played phenomenal to me," Toney said. "You don't see too many bigs pass like that.

"For him coming back from an injury, he played his butt off."

Williams had four turnovers, but three came in the first half when he was knocking off some rust after missing the Razorbacks' final exhibition game because of his back issues. He played 18 minutes in the second half with four assists and one turnover.

"I guess he's now considered a point forward for us," Musselman said. "If you clipped his minutes that he had the ball in his hands, he probably was at the lowest end of the guys that played. But yet he led us in assists.

"Other guys had the ball in their hands a lot and didn't come close to his amount of assists. So when the ball was in his hands, something good happened."

Musselman, a former NBA coach, said Arkansas might need to use Williams as a passing big man the way the Denver Nuggets do with 6-11 Nikola Jokic, who in his seventh season has a career average of 5.9 assists. Jokic averaged 8.3 assists last season when media members voted him the NBA's Most Valuable Player.

"So the question is, can we take a little bit from what the Denver Nuggets do with Jokic and put [Williams] in different areas?" Musselman said. "Maybe we change up some of our sets so that he can be a little bit more of a distributor.

"Those are some of the things that I'm kind of toying around with."

Musselman said the Razorbacks need Williams to regain his conditioning as quickly as possible so he can play more minutes.

"But his effort, his basketball IQ, his understanding of who to pass to, when to pass to him, I thought he was phenomenal," Musselman said.

Williams averaged 2.7 assists as a senior at Northside and as a freshman for the Razorbacks he had 21 assists in 26 games while averaging 15.4 minutes.

"I thought that for his size and his age, he was probably an exceptional passer even in high school when you look at the bigs," Musselman said. "He does a great job of reading the defense. He doesn't try to make any outlandish passes.

"He reads it, he delivers it, he throws two-handed chest passes. I just think it's kind of natural, and I think he's way more comfortable with the ball in his hands now than he was last year as a freshman.

"He might disagree and say, 'You should've given me the ball more last year.'

"For a sophomore one game in -- to think that we're already trying to tinker and add some sets and use him more as a passer maybe than we have -- is a credit to how much he's evolved and how hard he's worked."