The Divine Journey: A poetic walk in Dante's footsteps in Italy 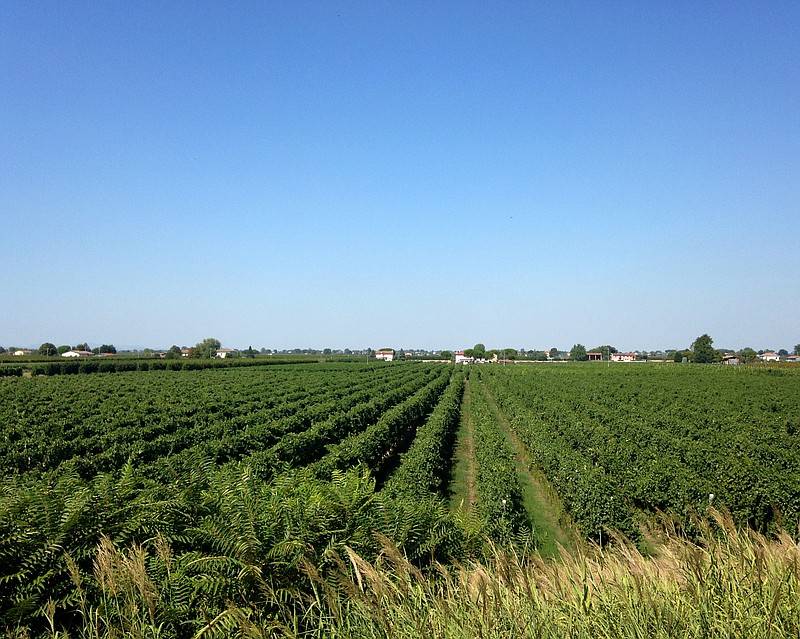 "The Divine Comedy," the poem-story of Dante Alighieri's journey from desperation to revelation, is so established in most people's minds that even those who haven't read it have an idea of what it contains: The eternally dammed of the Inferno. Demons with pitchforks. Burning popes. A frozen Lucifer. The redeemable sinners climbing through the Purgatorio. The angelic Beatrice. The bliss of Paradiso.

What fewer people know is that it was partly inspired by Dante's nearly 20 years of wandering around northern Italy after his exile from Florence in 1302. The expulsion of the poet, politician and patrician man about town by his political rivals offered a chance for reflective ambling, which Dante might have called solvitur ambulando, a Latin axiom for "it is solved by walking."

Today, in the regions of Tuscany and Emilia-Romagna, Dante's rhymes can be found inscribed on the walls of cafes, alleys and cloisters, his verses about gluttony and malice alongside menus and bus schedules. But people on the street can rattle off the rhymes without looking at these prompts; the poet's words are still felt as keenly as though they were civil edicts.

Like any great traveler, Dante knew the most fundamental act of the mind was seeing, and no one sees more than the walker. What Dante saw gave a raw physicality to his "Divine Comedy," setting the backdrop of Hell, Purgatory and Paradise. It was also where he came to hold certain aspects of behavior — reflection, humility, generosity — as metrics for redemption, along with walking.

Following Il Cammino di Dante (Dante's Walk), an approximately 250-mile route looping together Florence, the city of Dante's birth, and Ravenna, where he died and lies entombed, is as much a poetic pilgrimage as a chance, to hike the countryside. And so, in the early days of autumn, my partner Francisca and I became camminatoris di Dante, following in the footsteps of the great poet through the fields and over the hills.

Or, almost. Dante began his ethereal journey into the underworld depressed and harangued by wild beasts in a dark wood. Against that, things were markedly better for us; our first day's walk proceeded along a riverbank and miles upon miles of fruit-heavy orchards. Nor were we, in our early 30s, like Dante, "midway upon the journey of our life" — at least I hoped not. And whereas Dante had the poet Virgil as his guide, it was up to us to search out the telltale signposts of the Cammino di Dante. The red circles, painted on gateposts and trees, depicted the man himself, looking keen, gaunt and defiant, his aquiline nose pointing us in the right direction.

The idea was to walk half the loop; we would leave from Ravenna and reach Florence by Sept. 14, the 700th anniversary of Dante's death in 1321. We gave ourselves 10 days to walk 11 stages, which, in Italy-as-boot geography, meant walking from the back of the calf muscle to somewhere along the shin. 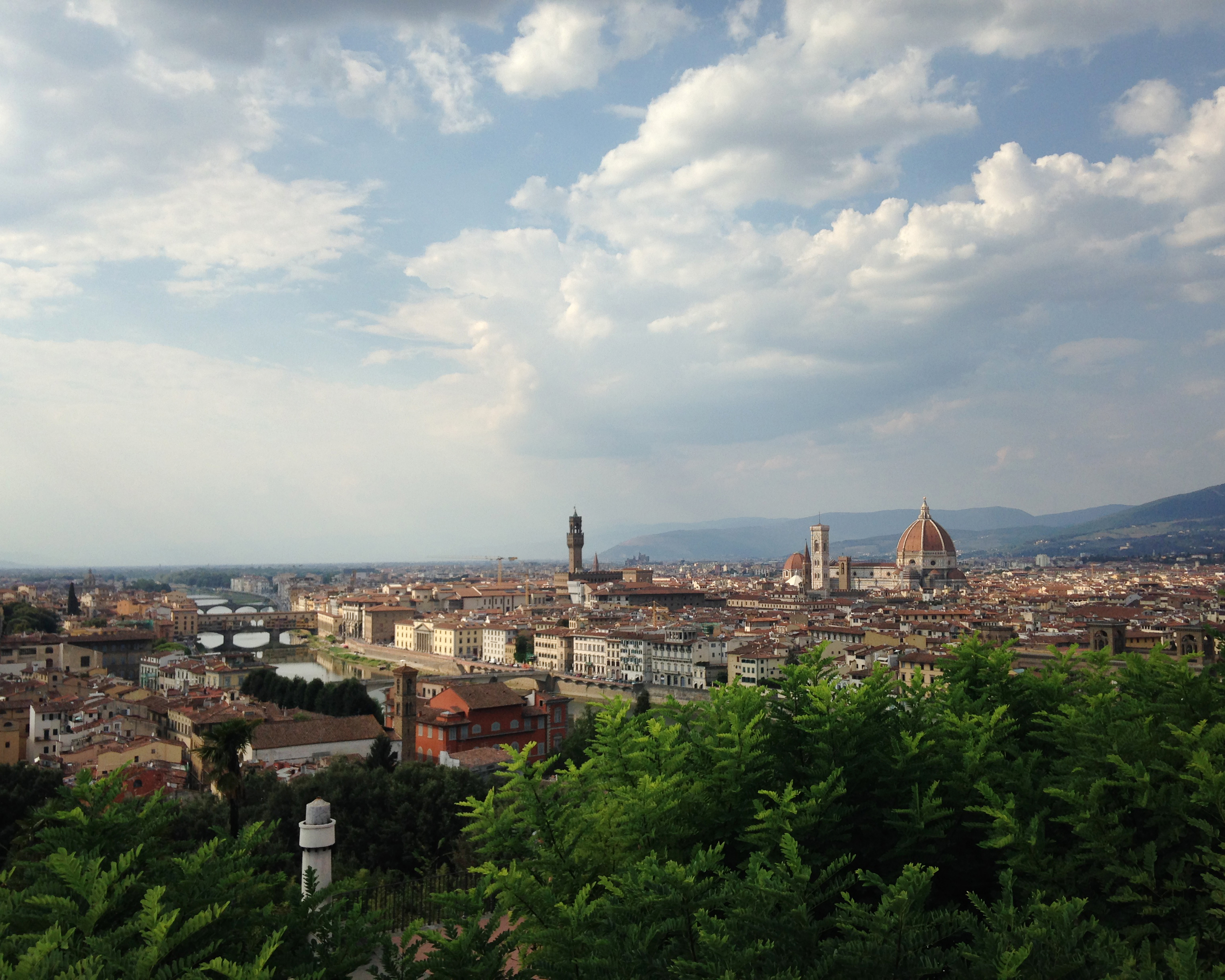 The dome of the Florence Cathedral rises over Florence, the city of Dante’s birth. (The Washington Post/J.R. Patterson)
SETTING OUT

Distance is a measurement set early in life, the landmarks of childhood imprinting on our geographic sensibilities forever, even as the magnitude of the world grows and shrinks around us. These juvenile dimensions make the world manageable and friendlier. My perception of distance, then, was formed by life at my parent's farm: two miles to my grandma's house, five to the farthest pasture, 12 to town. And so, our first day, pumped through with the rigors of enthusiasm, we walked to town, plus a round trip to Grandma's house.

But why not? The sun was high and warm, with a slight breeze carrying the voices of fruit pickers from across orchards heavy with grapes, pears, pomegranates, plums, kiwis and figs. Every time we came upon a wild blackberry bush, we gorged ourselves silly, our fingers excitedly plucking one berry after another, darkening with the inky juice stains. The nights were warm and we left the flaps of our tent open as we slept, letting the breeze cool us.

I quickly realized I would be achieving humility sooner than expected. I had made the classic mistake of buying new walking boots, which left me the blistered feet of one of Dante's damned simonists. Even stopping wasn't a balm for the throbbing ache. Each day, I limped farther and farther behind as Francisca skipped ahead. At least there was Dante to glean empathy from; the sore body is like a restless mind, he wrote, a "brute which knows no peace."

But while Dante walked through a rain of fire, dodging heretics, we ambled through dappled wood of chestnut and tractor-marked dirt tracks, hugging fields and mountain ridges. We were often the path's only souls, passing farmers and herders in their fields.

As we neared a country house, a woman threw open her shutters and hailed us on the road. "Camminatoris di Dante?" she cried, beckoning us to drink from her well spigot. The water was cold and clear, tasting mildly of soil. She pushed a large cluster of grapes into our hands and, while we munched, she lamented the dry weather. "It hasn't rained in months," she said, her Tuscan Italian full of soft g's and c's. "Even the weather has covid!"

Signs of the pandemic were still visible in the few towns we passed — Brisighella, Marradi, San Godenzo, all fitting snugly into their valleys like clusters of mushrooms sprouting in the crook of a tree stump. In Brisighella, we sought out the cafe dominated by the largest gaggle of old, chattering men. As they downed espressos and ruffled newspapers, they raised their voices to compensate for the social distance they gave one another. The coronavirus hit these small gatherings hard, but by meeting again, these regulars embodied the best in Dantean resistance and hope. One man stood to leave, crying to the crowd as he went: "Renounce Satan!"

From the beginning, the Apennines had loomed in the west, blue-green peaks rising out of the bright plain, growing larger with every step. Once we reached them in earnest, I heard Dante's words in my ear — "Why climb no higher up that lovely hill?/The cause and origin of joy shines there." — emphasized by the tolling of a bell. Southeast of Marradi, the Eremo di Gamogna, the Hermitage of Gamogna, sits on the lip of a soft "U" of a valley whose slopes were dotted with alder and ash.

The hermitage is a regular stop on the Cammino di Dante, and Sisters Anna Emmanuelle and Maria Paola insisted we stay for supper, though Sister Maria Paola made it clear that there would be no conversation: Eating was to be done in silence. Thus admonished, we made our way to the refectory, expecting a small meal at best, perhaps a plain broth and dry bread. Instead, we arrived to nothing less than a feast: country stew, roasted eggplant, piadine, cheese and sausage, peaches, tea and coffee.

After Sister Maria Paola's benediction dedicated to our journey, we loaded our plates and chewed to the choral works of Johann Adolph Hasse. Afterward, we tottered into the night, collapsing into our tent, where we finished a bottle of chianti while staring at the stars. In the morning, my feet felt — I whispered the word — miraculously better. Whether it was the benediction or the stew is difficult to say, though I received one prayer and ate two bowls. 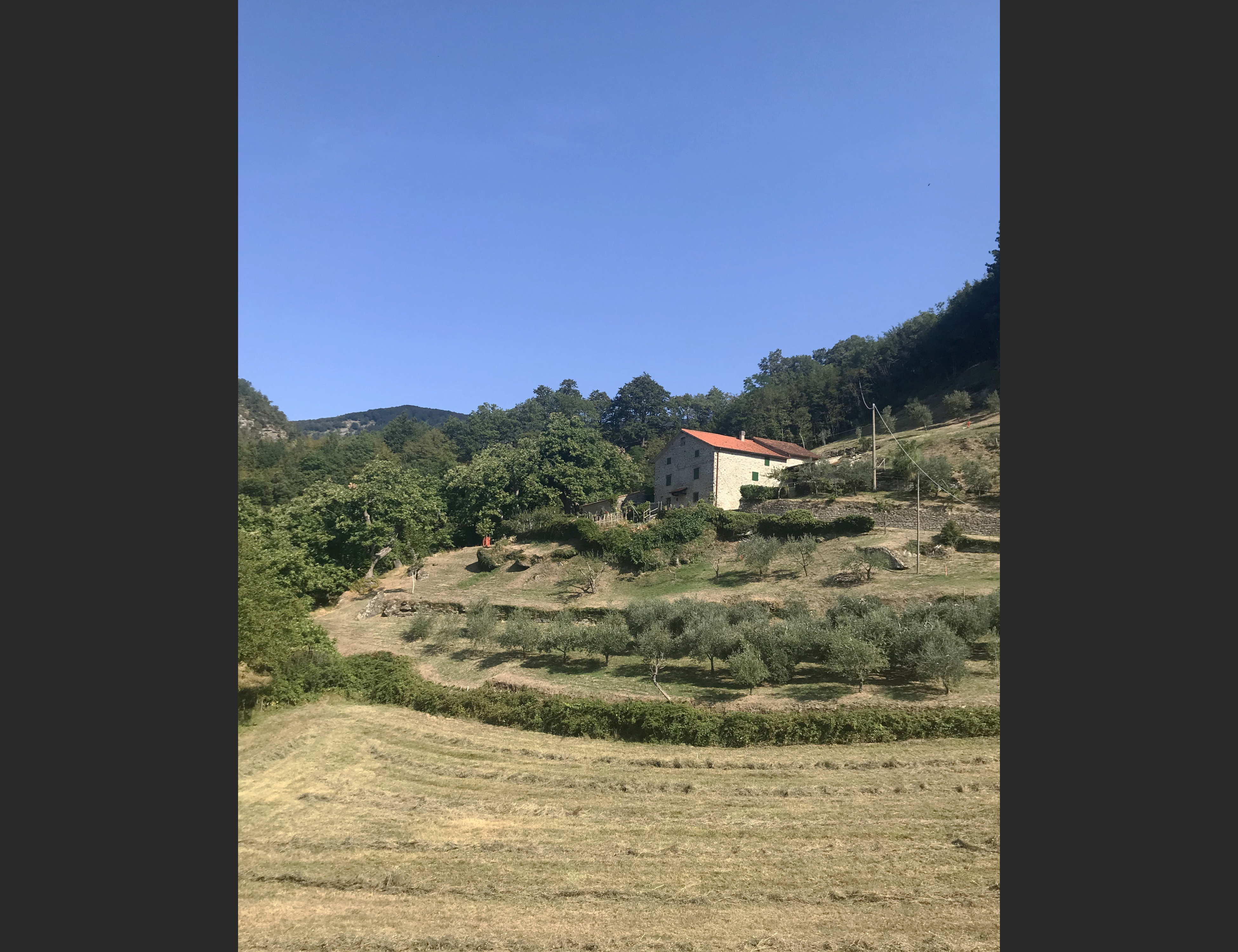 The next day, we reached the Acquacheta stream and its famous waterfall, which "thunders here, in one great bound, above/San Benedetto in Alpe." In Inferno, the waterfall plunges over the Great Cliff into the Eighth Circle of Hell, separating blasphemers from seducers. I cemented my future place among the former as I juddered down the hill, my tender toes slamming into the fronts of my shoes. When we reached the bottom, we plunged into the frigid river, ate lunch on a sun-warmed rock and pitched camp on the rocky shore.

We woke in the blue light of dawn, the air bruised and sodden. Dante's journey through Hell had been a downward plunge, but Paradise could only be reached by ascending the slopes of Purgatory. As the road rose, I bent to meet the earth, my head almost touching the ground before me. With my own Beatrice ahead of me as always, I began to play mental games to urge myself on. Walk to that tree, then you can rest. Get to that bend, and you can sit down. The fog and cool of the morning had burned away, and the sun was caught by the tops of the cypress trees, which were stuck like arrowheads into the mountainside.

After much huffing and puffing, we breached the top. Like Dante and Virgil on a ledge of the Mount of Purgatory, "here we both sat down/turning toward the east, from which we had climbed/for looking back will often cheer you up." Below us, the mountains rested under a knitted duvet of forest green, its smoothness only occasionally disturbed by the dropped stitch of a house or a small pea-green lea.

It was downhill from there to Florence, and soon the countryside gave way to industrial outskirts. Our time was nearing an end, and, anyway, I was unsure how long I would be able to continue making a daily trek from the farm into town.

The heat of Florence was stunning. The streets smelled pleasantly of leather and soap, but they heaved with people. We walked to Dante's House Museum and the Florence Cathedral, with its famous red-tiled dome and turquoise niches stuffed with saints. The piazza thronged with onlookers jostling for a perfect view of the basilica right in front of them. Its beauty was undeniable, but experiencing it came at the price of suffocation. Dante might have longed to return to his native city, but I pined for the quiet rectitude of exile in the countryside.

We decided to return to the quieter Ravenna for our Dante commemoration. It is, after all, where he rests. We took the train, passing in a few hours what had taken us days to walk through: the slender beauty of Marradi, the Rock of Brisighella, the parallel lines of orchards.

Ravenna was splendidly quiet and still. At his humble tomb nestled against the Basilica of San Francesco on Sept. 14, a small clutch of onlookers gathered to hear the mayor read a few passages from "The Divine Comedy," just as he had done throughout the year. The life force of Dante was thick here. It was the feeling of Paradise, the Paradise of home. That sense of renewal, of rejuvenation could be seen in the faces of the onlookers as the mayor's voice carried Dante's cadence over them: "His spirit, which had left us, returns."

Compact rooms with ornate frescoes on the ceiling. Rooms from about $67 per night.

This cafe-bar in the village piazza prepares fresh pasta dishes, although it's more popular for its ice cream treats. No set hours, although the owner says it's "always open." Entrees from about $5.80. 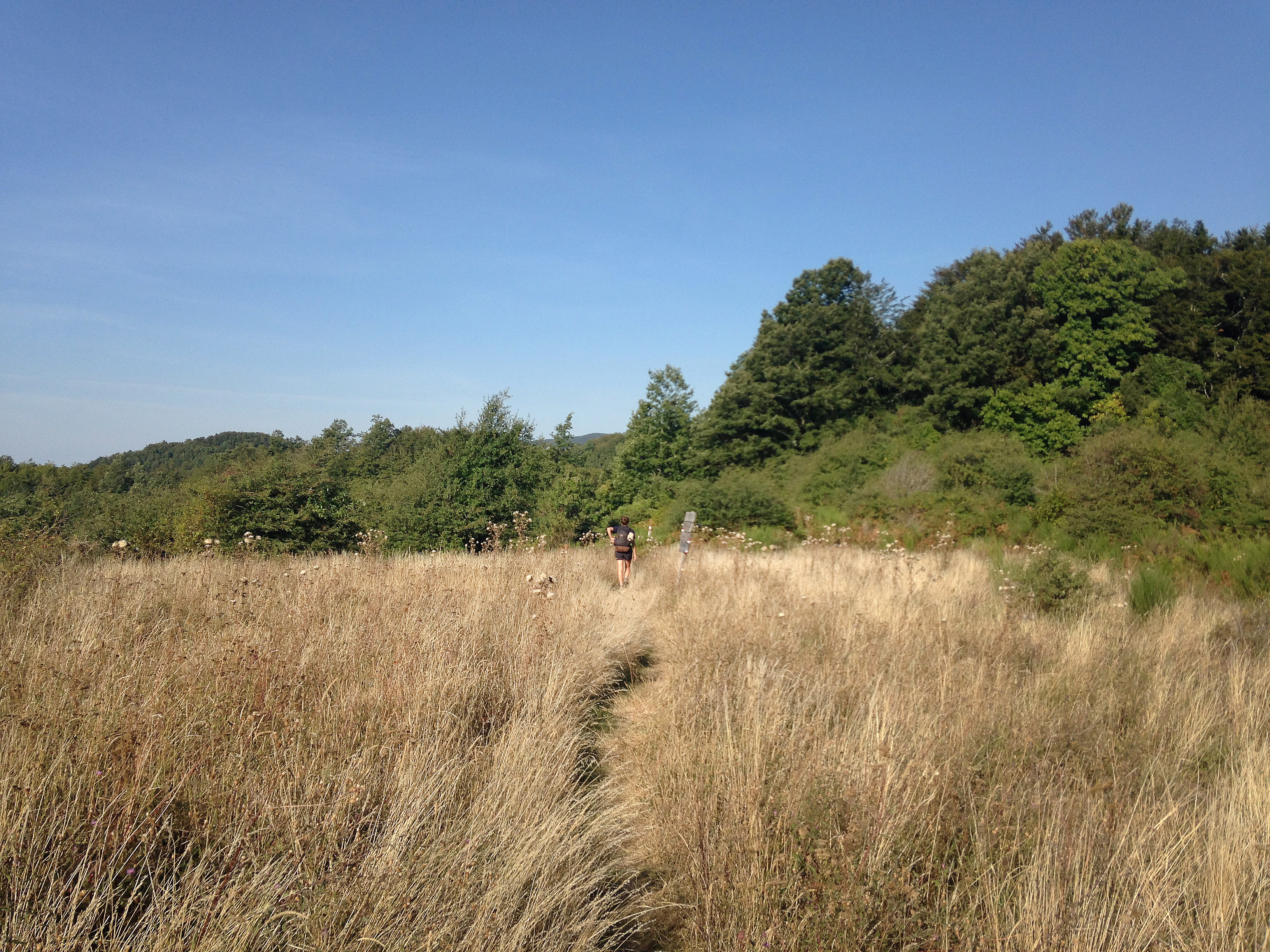 Il Cammino di Dante passes through rural Italy, including areas such as this pasture outside of San Benedetto in Alpe. (The Washington Post/J.R. Patterson)

An approximately 250-mile loop connecting Ravenna and Florence is divided into 20 stages, the beginning and end of each signified by a village where food and accommodation can be found. It can start in either city. Buy a phone app for about $11.50 that contains all the necessary information, including path gradient and difficulty, as well as a route map and where to find water and accommodations. Walkers can register for about $30 to receive physical maps and discounts at various Dante-related events and attractions.