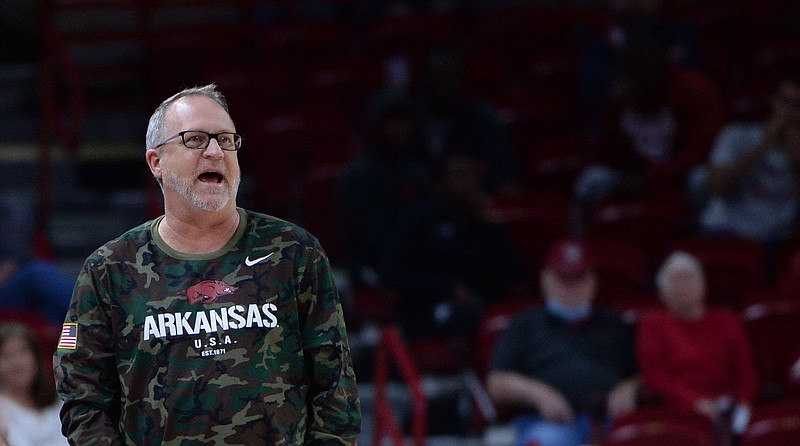 Arkansas coach Mike Neighbors directs his players Friday, Nov. 12, 2021, during the first half of play against UAPB in Bud Walton Arena in Fayetteville. (NWA Democrat-Gazette/Andy Shupe)

CHALK TALK There’s 10 Arkansans combined on the two rosters. … The first meeting between the two teams came on Dec. 10, 1977, and was won by Arkansas State 67-59 in Jonesboro. ASU won two of the first three.

ASU knocked off Arkansas 98-84 the last time the two teams squared off in the second round of the WNIT in 2005 in front of a sold-out crowd of more than 10,000 in Jonesboro.

But almost everything is different for both teams today. Long-time Razorbacks staffer and former standout Amber Shirey is probably the only common thread left among either team. The Lady Indians are now the Red Wolves and the Convocation Center is now First National Bank Arena.

But foremost, there's no longer a policy against the Razorbacks playing in-state competition. So both coaches are focused on the here and now as they get set to square off tonight at 7 in Jonesboro.

Daniel admitted he doesn't expect there would be close to 10,000 people in the stands tonight, but seats in the lower bowl are sold out, which seats around 2,500. That number includes 900 ASU season ticket-holders.

Both teams have identical 2-1 records and still searching for their identities. Arkansas is coming off a 95-80 loss at No. 2 Connecticut on Sunday, while ASU rolled over McNeese State 96-72 on Monday. The Red Wolves' lone loss was a 101-89 defeat at Oklahoma a week ago.

The Razorbacks have started a slightly different starting lineup in each of their first three games and Neighbors said expect a little change tonight, too. But the quartet of Amber Ramirez, the lone senior on the roster, Sasha Goforth, Makayla Daniels and Erynn Barnum have all started every game thus far, including the exhibition against Arkansas-Fort Smith.

On the other hand, Daniel has started the same lineup in all three games, which includes two freshmen and a transfer. But junior guard Jireh Washington, a preseason second-team All-Sun Belt Conference selection, hasn't played a minute yet because of an injury.

However, it's possible she could play tonight, Daniel said.

Both teams are led in scoring by two Little Rock Central graduate. Lauren Pendleton, a 5-9 freshman, paces the Red Wolves, averaging 15.7 points per game, while 6-2 redshirt junior Erynn Barnum averages 14.3 points and 6.7. rebounds per game for Arkansas -- both team highs.

Youth is a common theme for both teams as there's a combined 10 true freshmen on the two rosters. It's hard to tell how younger players will react under certain circumstances, Neighbors said.

"It could be a lot of emotions just because of the excitement that'll be around it," Neighbors said. "You don't ever know what to expect. I've learned from our freshmen, sometimes the bigger the stage, the better they play, too. ... Sam Spencer sure doesn't seem to be intimidated by any atmosphere."

Spencer is one of four Razorbacks averaging in double figures at 11.3 points per game with just one start. Freshman guard Jade Upshaw has also provided a spark off the bench for the Red Wolves, averaging 13.7 points per game.

Daniel and Neighbors said the most important thing about this game is to help grow the game in the state.

This will be the ninth game all-time between the two teams, but prior to the 2005 game they hadn't played since 1983 when Daniel was 7 years old.

"Keep in mind, that game in 2005 wasn't scheduled," Daniel said. "We're intentional about this. We have a four-year deal, but we don't anticipate it stopping at least not as long as Mike and I are coaching."

Neighbors said it should help both teams. 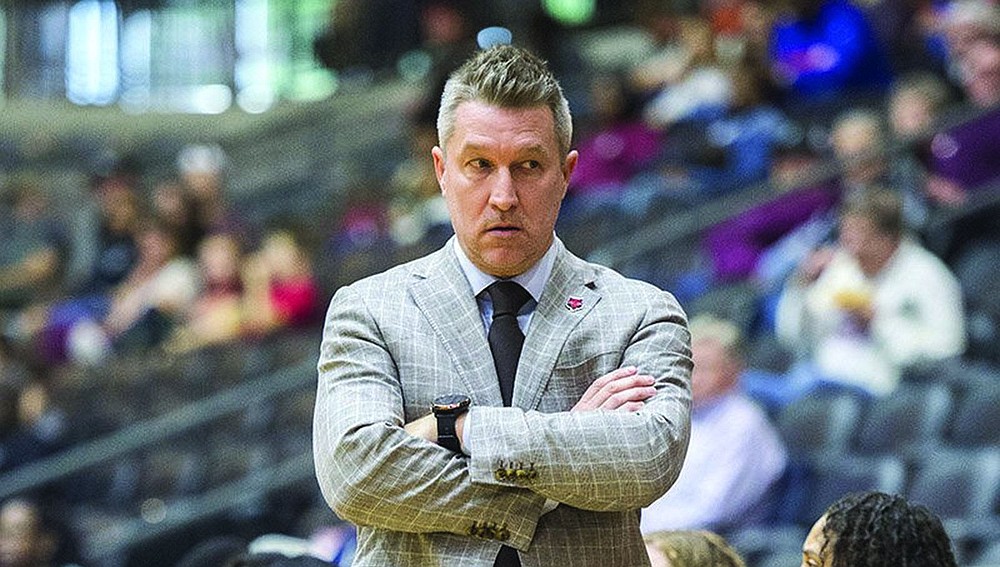